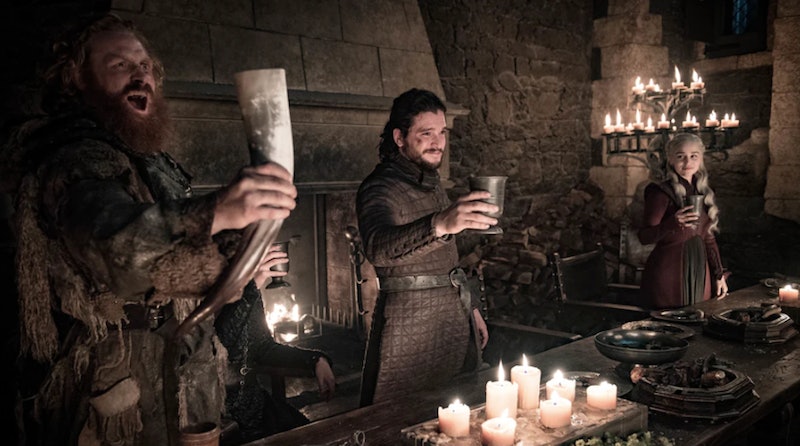 Tormund is spilling the tea. Apparently, Game Of Thrones filmed an alternative final ending. And according to Kristofer Hivju, it was actually a lot of "fun," a word too few fans used to describe GoT's final season.

In a new interview with Metro UK, Hivju revealed that there is another Game Of Thrones ending out there, but it was just filmed for the memories. “Well, we shot an alternative ending that was mostly for fun," Hivju said, "but I don’t know if I’m allowed to tell you about that.” Even though Game Of Thrones is officially over, it seems the show's super secrecy is not. Unfortunately, Hivju didn't share any details about this other ending, not even who was in it. "I won’t tell you!" he said, though he did admit "it was fun" to film.

Now, "fun" is a very broad term. What's fun to one GoT cast member might not be to another. But the actor's use of the word "we" suggests he was in this alternate ending. So, let's think of endings that might be fun for Hivju. Did Tormund finally lock in a date with Brienne of Tarth after she had some time to mourn Jaime? Did Jon Snow end up taking over the throne with Tormund by his side, the new Hand to the King? Was he best man in Jon Snow and Daenerys Targaryen's questionable wedding? Let's be honest, there's no one more fun at a party than drunk Tormund.

While these possible endings might seem farfetched, it's not hard to believe that the alternative Game Of Thrones ending Hivju mentioned was actually a fake ending to the series, filmed in an attempt to keep leaks and spoilers at bay. It wouldn't be too far-fetched for the HBO drama. After all, it was rumored that Season 8 scripts would self-destruct after an actor filmed their scenes. Something Nikolaj Coster-Waldau, who played Jaime Lannister, seemed to confirm last year. "We actually get the scripts and we shoot the scene,. We only have it digitally, and when you've done the scene it just vanishes," Coster-Waldau revealed in an interview at Cannes. "It's like Mission: Impossible — 'This will self-destruct.'"

It was also reported that the show filmed as many as eight different endings to keep fans from spoiling the finale. And even now, six months after the real Game Of Thrones ending aired, the cast is still too scared to spoil all the fake ones.