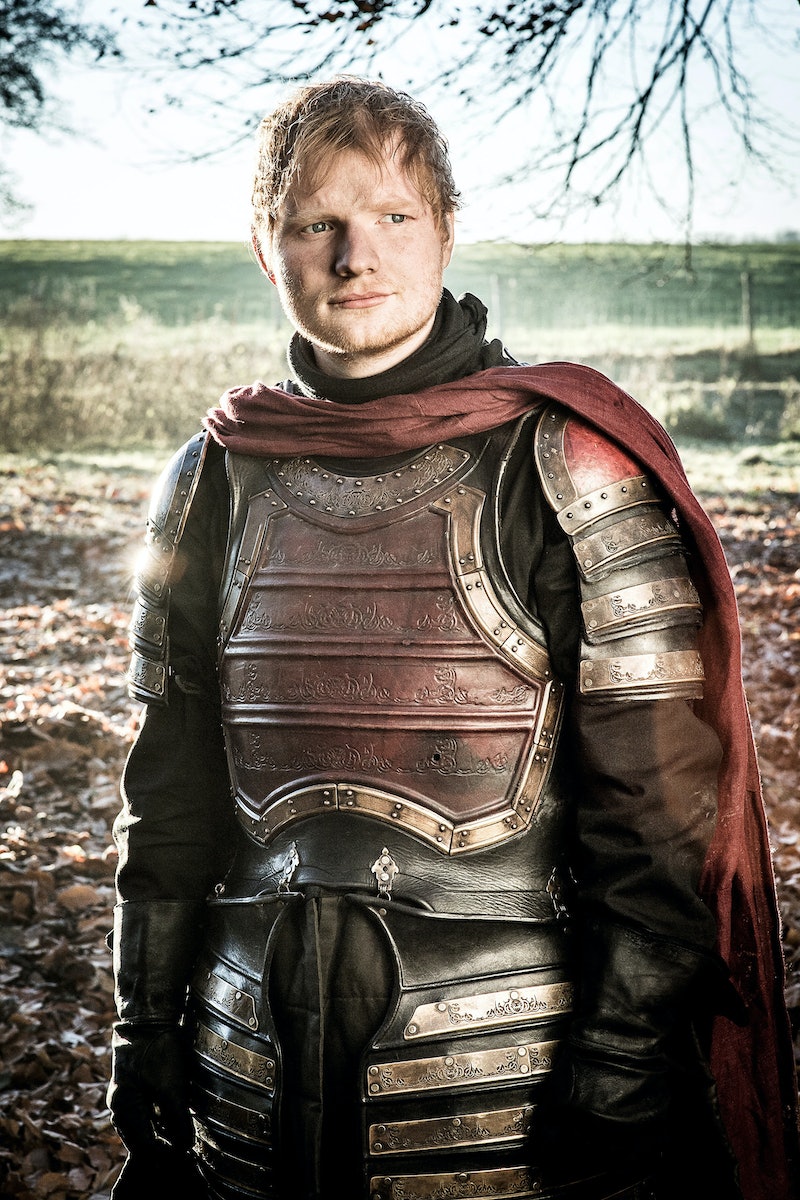 Sunday night's premiere included a brief conversation at a brothel, in which a character named Eddie's fate was casually revealed. In the scene, a woman at the brothel tells Bronn that Eddie's face was burned off, right down to the eyebrows. "Came back with his face burned right off," the woman said of Sheeran's character. "He's got no eyelids now." To that, Bronn wondered how Eddie was managing to sleep without eyelids, which is a pretty fair question.

And while that might sound like a terrible fate in normal circumstances, it's not the worst one in the world of Game of Thrones. Eddie may no longer have eyelids or eyebrows, but he's still alive. And that's a lot more than plenty of the show's other characters can say for themselves.

Though Sheeran was not originally given a name for his Season 7 appearance — IMDB credits him as "Lannister Soldier" — many fans assumed that this "Eddie" must be a reference to the musician.

Sheeran appeared to confirm that Eddie was, indeed, his character, after the show. He praised his character's outcome in an Instagram Story post, too. The "Shape of You" singer posted the text of the conversation about his Lannister soldier character, writing, "Thanks @gameofthrones, I knew I was a survivor x."

While not all of the show's fans were on board with the singer's Season 7 cameo, there was a pretty understandable reason he appeared in the show. Star Maisie Williams is a huge Sheeran fan, so the show's crew thought it would be fun to have him do a scene with her character, Arya.

"Ed Sheeran's got a beautiful voice. And we knew that he was a fan of the show, and we knew that Maisie was obsessed with him," David Benioff, one of the Game of Thrones showrunners, said in a behind-the-scenes clip released in 2017. "So we always thought it would be fun to try to get him into a Maisie scene at some point."

The showrunners made it happen, and the Eddie-Arya scene was short but surprisingly sweet. (Still, there were plenty of fans who'd hoped that Sheeran's appearance on the show would include a scene of him meeting a violent end.)

Back in September, Sheeran addressed the backlash to his Game of Thrones appearance during an interview with BuzzFeed. The singer confirmed that he knew most fans wanted him to die on the show, and he was honestly pretty chill about it. "I know what Game of Thrones fans hoped happened to my character. I'm sure they think my character got brutally, brutally murdered, but I think my character is still out there. I think he's chillin'," Sheeran told BuzzFeed at the time. "It was fun being in Game of Thrones, but I definitely think they should've killed me off in the episode. I reckon that probably would've been the redemption for people that didn't like it."

While having his eyebrows burned off might not exactly count as "chillin'," Sheeran's instinct about his character being alive turned out to be right. It might not be the Game of Thrones storyline that was keeping fans on the edge of their seats, but it's still nice to hear about Eddie's fate, and to know that his story has come to a close on the show.