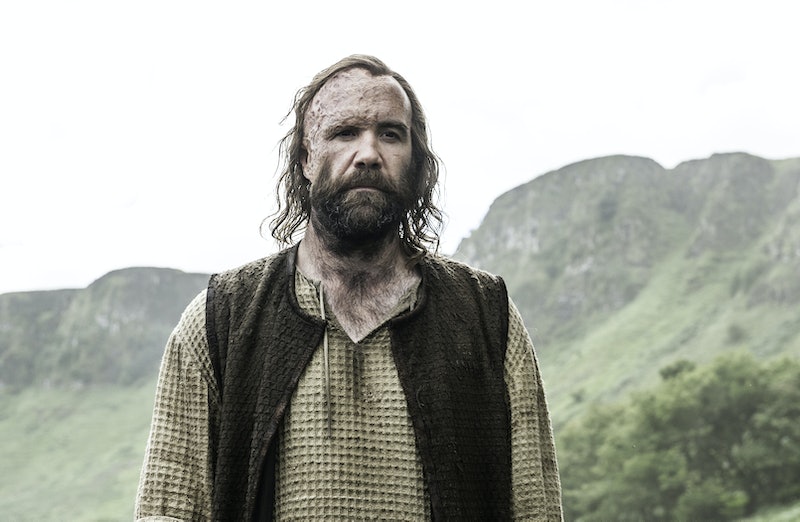 When it comes to being a Game of Thrones fan, speculating about a variety of different theories becomes almost as natural as breathing. It's basically programmed into our very DNA. And while some of those theories have finally come to fruition (i.e. Jon Snow's true parentage finally being revealed), there are others, like the Cleganebowl, that have yet to play out. However, some fans believe that Cleganebowl will finally happen in Game of Thrones Season 8, based on a recent comment actor Hafthór Björnsson (aka The Mountain) made during an Instagram Q&A.

For those unfamiliar with the term, the Cleganebowl is a reference to the long-awaited battle that is expected to take place between brothers Gregor "The Mountain" Clegane and Sandor "The Hound" Clegane. These two have taken the concept of sibling rivalry to a whole never level ever since the very start of the series. In fact, The Mountain is actually the one responsible for giving The Hound all of the scars on his face. (He had played with his brother's toy as a child and apparently that warranted physical torture.)

Suffice to say, these two have been on the precipice of an epic showdown for quite some time, and with only six episodes left in the entire series, time is running out for it to ever happen. Hence why fans are eager to grasp onto any possible word or comment that could provide hope that this moment is definitely on the horizon.

Which brings us back to the Instagram Q&A that could turn the tide and give us the brotherly battle we've been waiting for. When asked by a fan what his favorite Game of Thrones scene was, Björnsson responded by saying, "It happens in season 8...so I can't speak about it." That may not seem very telling at first, and the actor didn't go into any more detail than that, but to die hard Game of Thrones fans, it feels almost like a confirmation that Cleganebowl is imminent.

The Mountain has had some pretty pivotal scenes throughout the series so far. He killed Oberyn "the Red Viper" Martell back during Season 4 in a scene that still is nightmare-inducing all these years later. He also rose from the dead and has been serving as Cersei's righthand bodyguard ever since. So what could be more exciting to film than all of that? The only clear answer fans can think of is the Cleganebowl. That would definitely be a highlight in The Mountain's story arc, so if Björnsson's favorite scene ever takes place in Season 8, then one can assume that's when The Hound and The Mountain will face-off at long last.

Sure, it's possible Björnsson could've been referring to something else entirely. To try and predict what will happen on Game of Thrones has become almost impossible now that the show has extended beyond the books. But the fact that The Mountain still has a significant part to play in the eighth and final season is definitely a good sign for what's to come. And considering that Cersei is planning on double-crossing Daenerys and Jon Snow during the White Walker battle, the opportunity for The Hound and The Mountain to be on opposing sides is definitely there. It's just a matter of whether the writers are able to fit it in during the confines of six episodes.

That also begs the question of who would come out of the fight victorious. The Hound may be an impressive swordsmen and has proven on more than one occasion that he knows how to take a beating, but he may not be a match for his brother, who has literally defied death. He was extremely strong long before he became the FrankenMountain and that strength has only gotten more enhanced. The Hound may want vengeance on his sibling, but it could result in a very grim outcome. Only time will tell how it'll all play out.