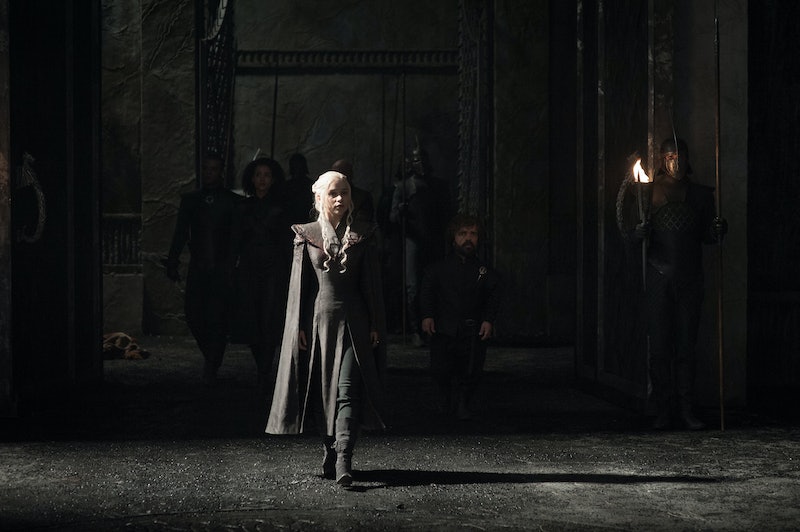 While viewers are pumped to see how HBO's fantasy saga will conclude, one aspect of the show's endgame has been brewing minor resentment: the shortened episode counts. Fans understandably want as much of their favorite series as possible before it's over… which is why the fact that the Game Of Thrones Season 8 episodes will be feature-length is the best possible news they could have gotten at this point. Season 7 will contain seven episodes and the final season only six — both down from the usual 10 — but this revelation means that the show will actually be sacrificing as little screen time as possible… and it also promises exciting things about the story's conclusion.

The news came out of this July's GoT fan convention Con Of Thrones in Nashville, with Deadline reporting on a panel given by the show's sound designer, Paula Fairfield. According to the report, the crew member teased that Season 8 will follow in the footsteps of the Season 7 finale — which will break Thrones records as the show's longest episode yet, clocking in at a whopping 81 minutes — by consisting entirely of feature-length episodes. (Talk about putting the "box office" in Home Box Office!)

If all six of the final season's episodes really are in the "80-plus-minute range" as Fairfield hinted, that's thrilling news for a number of reasons. The six existing seasons of Thrones have averaged 55-minute episodes, with some dipping as low as 50 minutes, and the finales typically coming in closer to a full hour. If the reported Season 7 run times are correct, then the penultimate season will increase that average to 63 minutes, with three of the seven episodes clocking in over an hour — including that super-sized finale — for a total 442 minutes of screen time.

Let's assume that Fairfield is correct, and that Season 8 will consist exclusively of episodes in the 80-minute range; let's even go ahead and assume that they land on the lower end of that range, and that they'll average 81 minutes like the Season 7 finale. That would still have the eighth and final season of Thrones clocking in at 486 minutes: that's even more screen time in six episodes than Season 7 will have had in seven — and it's not all that significantly lower than the 550-minute average of a typical season of the show. But instead of the run time being spread out across 10 weeks… fans will be able to gobble it up in six action-packed episodes.

Even more intriguing than the simple prospect of the final season's run time is what this revelation means for the plot of the show itself. When it was announced after Season 6 that Game Of Thrones would wrap up in only 13 more episodes, popular wisdom dictated that the writers were simply running out of story to tell, and didn't have two full seasons left of material to produce before they needed to wrap things up. But now that fans have learned the decreased episode count isn't directly correlated to an analogous decrease in screen time, a lot of questions are raised.

Judging by the promos for Season 7, the prevalent fan theory is that the upcoming penultimate season will resolve the struggle for the Iron Throne and clear the board in anticipation of the saga's final conflict: the war between the living and the dead that will likely occupy most of Season 8. In that regard, the final season also being the shortest made a certain amount of sense; while the climactic battle with the White Walkers is sure to be exciting and eye-popping, there doesn't really seem like there could be 10 full episodes of material there.

After all, the White Walkers aren't really characters with personalities so much as they are unstoppable forces of nature, so how much drama and intrigue could there be? Surely Dany will swoop in with her dragons, roast the armies of the frozen undead, and there will be much rejoicing. Right? Well, the revelation that Season 8 will boast almost as much content as a typical 10-episode season of Thrones puts the lie to this theory. Apparently the final season won't just be six hours of dazzling eye candy after all.

For years, some fans of George R.R. Martin's novels have wondered if the author was building to some twist involving the White Walkers. After all, the author is so good at populating his fictional world with characters that aren't 100 percent good or 100 percent evil and subverting typical fantasy expectations; will his entire saga really boil down to good dragons vs. evil zombies? So far, readers (and viewers) haven't learned too much about the White Walkers, their culture, their motives, or their ultimate goals. Could there be more to them than meets the eye?

In the books, Bran recounts a story Old Nan once told him about the fabled Night's King, a Lord Commander of the Night's Watch centuries ago who fell in love with a woman "with skin as white as the moon and eyes like blue stars." The couple ruled together from their dreaded castle, the Nightfort, and it took the combined might of the Night's Watch, the Lord of Winterfell, and the King-Beyond-The-Wall to end their reign of terror. But if White Walkers truly are beings who are capable of falling in love and coupling with humans, surely there's more that fans don't know about them, and more layers to them to be revealed at a later date.

Perhaps the feature-length episodes of Season 8 will finally see the White Walkers come into their own as true three-dimensional characters as complicated as the rest of the rich cast that populates Westeros. Until then, at least fans who have long been clamoring for a Game Of Thrones movie finally have something to cheer about — six Game Of Thrones movies in a row, all of which they can screen from the comfort of their living rooms.