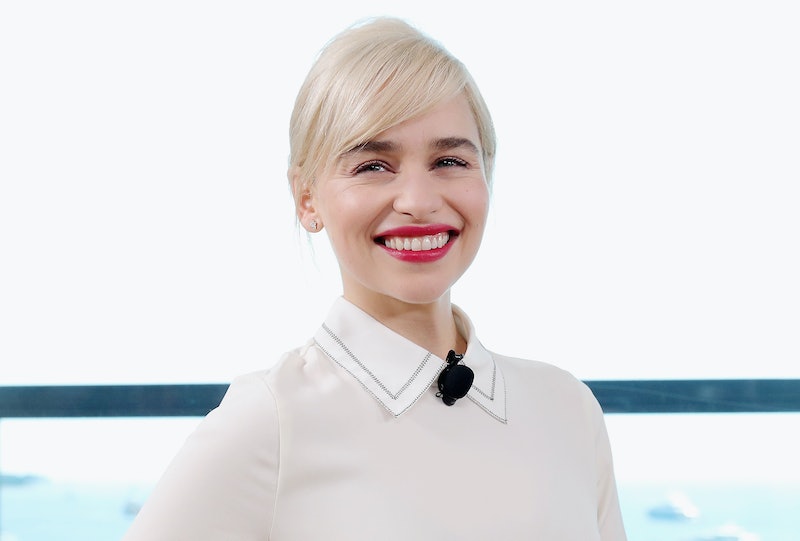 Emilia Clarke has a bone to pick with journalists and it has to do with a certain word, that in her opinion, they grossly overuse. That word, would be "strong" and she thinks the media should strike it from its vocabulary immediately. Specifically, Clarke's comments about female characters not needing the adjective "strong" make so much sense. She isn't wrong that there is a Hollywood double standard when it comes to the word.

While at the Cannes Film Festival, Clarke made it clear to Variety that she doesn't play strong female characters, she just plays female characters, full stop. So, in her opinion, it's kind of repetitive to even include that word. Clarke said:

“If it’s not strong, what is it? Are you telling me there’s another option, that there’s a weak option? You think a lead in a movie is going to be a weak woman? It just doesn’t even bear having the conversation, so enough already with the strong women, please.”

Clarke's right that it's hard to think of too many female characters on the big or small screen that aren't strong in their own way. That's because strong means a lot of different things, but the way that it's used in Hollywood seems to have become the acceptable shorthand when trying to pay a female character a compliment. But it's used so often that it basically means nothing, it's just kind of lazy.

Clarke's Game Of Thrones character Daenerys Targaryen has been called a "strong female lead," as has, Reese Witherspoon's character Tracey Flick in Election, courtesy of Netflix's "Strong Female Lead" category, and Sigourney Weaver's Ripley in the Alien movies, but the word seems limiting since it really tells you very little about any of these characters. Not to mention, that these three women all very different, and wholly original characters, and shouldn't have to share the same descriptor.

Shonda Rhimes, whose characters have often been called "strong female leads," tweeted a similar assessment that the description is sexist and needs to be axed. Back in February, Rhimes tweeted, "Okay. Entertainment industry, time to stop using the phrases 'Smart Strong Women' and 'Strong Female Leads'. There are no Dumb Weak Women. A smart strong woman is just a WOMAN."

The real clue that "strong" isn't the most dynamic of word choices is that it seems to only refer to female characters. While speaking at Cannes, Clarke brought up this double standard, saying that there aren't any "strong male leads," and if the word strong is used to describe a male character it's because they are physically strong, or it's used in addition to another adjective. Like say how The Hollywood Reporter described John Boyega's Finn in Star Wars: The Force Awakens as a "strong and vigorous male lead, not to mention, the counterpart Jyn (Felicity Jones) needed in Rogue One.

It's why Clarke told Variety she'd like to scrap the word "strong" in lieu of other, different, maybe even better words. She even suggested some other ways people could describe the characters she plays like Qi'ra in her latest movie, Solo: A Star Wars Story. They could ask her things like, “What does it feel like to play someone with power?” or “How does it feel to play a female lead in a big blockbuster movie?”

“Take the ‘strong’ out of it, find another adjective, damn it,” Clarke said. “I’m just playing women.” Clarke's right that the word "strong" has been used for far too long to say very little about who a female character really is. These women deserve to be described the same way male leads are, who always get to be more than strong characters.

Removing this one word from the descriptions of the kinds of characters Clarke play might even help change the way men these characters are seen. It will give the women who play these female characters a chance to show that they are way too complex for just one word.