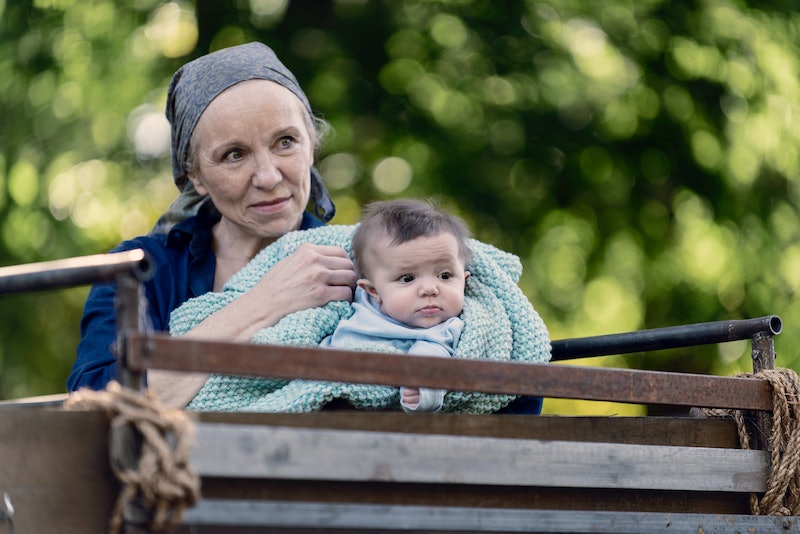 Spoilers ahead for The Walking Dead Season 10. It said a lot about the Whisperers' twisted priorities when they abandoned a baby at Hilltop at the end of Season 9. But now, in Season 10, viewers are learning more about the Whisperer baby's history and the toll that that incident has taken on the mother. Turns out, the baby's mother is Gamma's sister Frances, and not only does losing the child cause her to doubt Alpha's leadership — the momentary slips ultimately get her killed.

The baby first appeared at the end of Season 9, Episode 11 "Bounty," when Alpha leads a group of Whisperers to the Hilltop gate in order to demand Lydia be returned to her. As the Whisperers attempt to trade hostages Luke and Alden for Alpha's daughter, the baby's cries attract a small herd of walkers. When this happens, Alpha looks at the baby's mother, indicating that she must put the baby down to save herself. "If the mother can't quiet the child, the dead will," Alpha says. "Natural selection."

"What I really thought was so interesting and chilling about Samantha Morton’s performance as Alpha there is when she looks back at the woman and literally just shrugs," The Walking Dead showrunner Angela Kang told Entertainment Weekly at the time, praising how that one moment encapsulates the Whisperer's cruel philosophy. "There’s such a casualness to it [...] their whole thing is that you have to stamp out your human emotions about it. You just have to do what you have to do so that the group continues to survive."

However, as Sunday's new episode of TWD Season 10 is proving, stamping out those emotions is not that easy. Most of "We Are The End Of The World" is devoted to Alpha and Beta's relationship and origin story, but a subplot revolves around two sisters in their pack and how they're struggling to fit in with the Whisperers. One is Gamma, played by Thora Birch (Ghost World), and the other is the baby's mother Frances, played by Juliet Brett (Fosse/Verdon). When Frances goes out on missions with Beta and her sister, she experiences flashbacks to the last time she saw her child.

Frances tries to rationalize that the baby is better off now, but has difficulty letting go and breaks down crying, putting her life and the pack in danger. Alpha forgives her the first time, but the second time Frances breaks from the group she pays with her life. Her sister kills her, and earns the title "Gamma" because of that ability to distance herself and cut family ties.

At least the baby made it out of the Whisperer group in one piece. Luke and Alden are able to orchestrate a rescue for the baby with the help of Connie, who was hiding in a nearby cornfield. He is adopted by Tammy Rose, who Alpha later kills at the massacre, and Earl Sutten at the Hilltop, and given the name Adam Sutten.

Presumably, Adam is still safe and sound with Earl at the Hilltop, but after abandoning him in the first place and killing his adoptive mother, Alpha has now targeted this baby twice. What if she keeps going after him? What if Gamma finds out where her nephew is, and regrets killing Frances? The Walking Dead clearly isn't abandoning this thread of the story, so keep track of baby Adam as the Whisperer War continues.