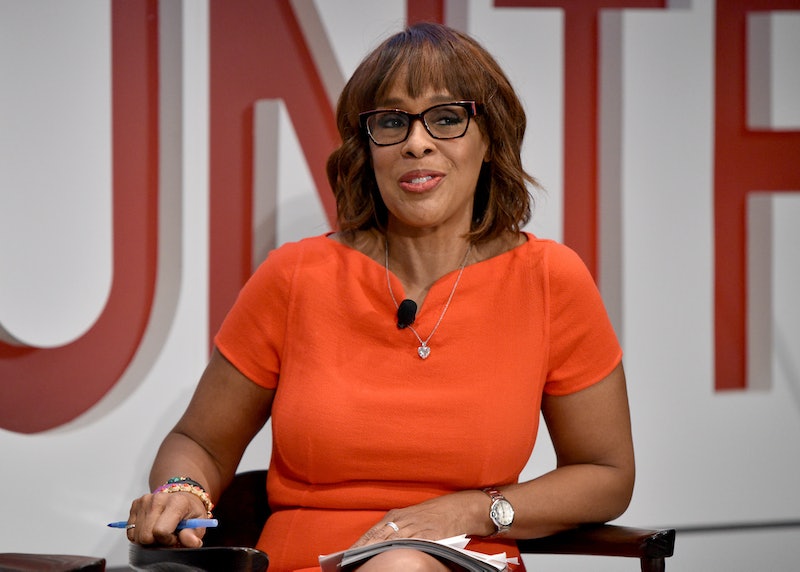 R. Kelly's first interview since being charged with sex crimes in February aired on Wednesday. The interview caused a stir, in large part because of Kelly's outburst; he stood up midway through the sit-down and shouted frantically while pacing around the room. But Gayle King, who interviewed Kelly, says the anger he displayed didn't faze her, and that she was instead focused on doing her job as a journalist.

Kelly was charged in February with 10 counts of aggravated sexual abuse. According to the Chicago Sun-Times, the charges center alleged incidents involving four women, three of whom were reportedly underage at the time, over the course of 12 years.

In his interview with King, he emphatically denied all of of the charges. Kelly also denied more specific allegations, first reported by BuzzFeed News, that he held several girls against their will, sexually abused them, and dictated their every move.

"I did not do this stuff," Kelly said. "This is not me! I'm fighting for my f*cking life. Y'all killin' me with this sh*t!

He then stood up and began screaming that "this is not about music" and that "y'all just don't want to believe the truth." A photo of King sitting down, calm and composed, while Kelly loomed over her shouting and gesticulating quickly went viral as well.

But King tells Oprah magazine, where she is the editor-at-large, that despite Kelly's intense behavior, she was never fearful for her physical safety. Instead, she says she was focused on making sure that Kelly didn't walk out of the interview.

"I was not scared. I never thought he was going to hit me," King says. "I was more worried that he was going to get up and leave. So what I was really thinking to myself was: I'm not done with this interview, so I'm going to let him have his moment. If I stood up even to comfort him, that could have been his invitation to say 'This is over.' So I didn't interrupt his anger and let him have that."

King did say that at some points, he was worried that "he might accidentally hit [her], because he was so angry that he was flailing," but that she otherwise wasn't intimidated by him.

As King noted in the interview itself, she was surprised that Kelly agreed to sit down with her. She tells Oprah that it was, in fact, Kelly who reached out to CBS to propose an interview, and that he asked for her specifically; it's unclear why, although King did say that she and Kelly had met in passing at a birthday party years ago.

"I had some reservations because I was thinking, 'What are we gonna get? He's just going to deny it!'" King tells Oprah. "But I did it because I at least thought there would be some...if not contrition, then at least acknowledgement that 'This is a bad situation, and I have made some mistakes.' But instead, he seems to believe everyone is out to get him."

Shortly after giving the interview to King, Kelly was ordered back to jail for failing to pay child support to his ex-wife in an unrelated case.