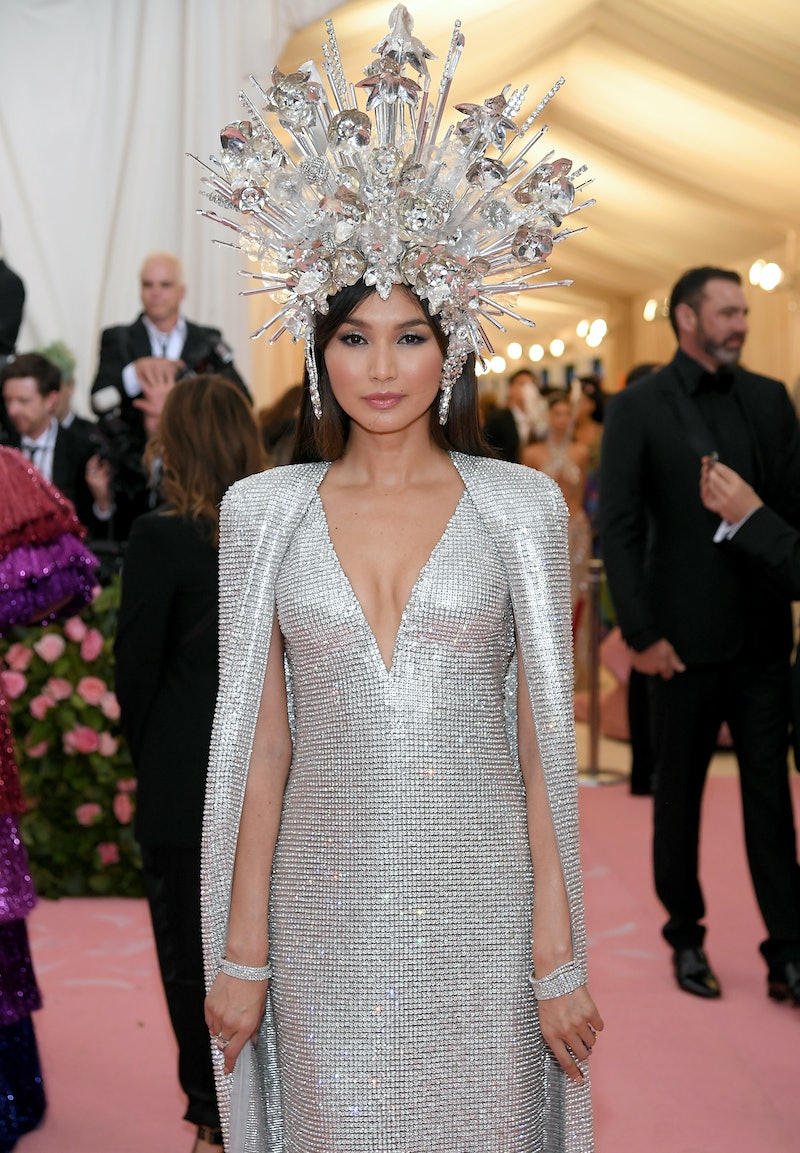 When up-and-coming celebrities make their debut at the Met Gala, fashion lovers are always curious to see how they'll make their mark on the iconic steps. And shocking absolutely no one, Gemma Chan's 2019 Met Gala outfit was the perfect bright, glitter-ridden, and oh-so shimmery trifecta to say the least.

According to Harper's Bazaar, celebrity stylist Rebecca Corbin-Murray is responsible for dressing Chan tonight, and the look is a banger for sure. Chan stepped out in a Tom Ford gown, representing the night's "Camp" theme, by wearing head-to-toe silver and an eye-grabbing headpiece to match. Chan also wore a matching floor-length silver cape with high shoulder pads to complete the look. Plus, she also rocked a pair of silver peep-tie heels to top off an already sickening Met Gala debut.

The ice around Chan's fingers is from Forevermark diamonds, where Corbin-Murray explained would deliver Liz Taylor vibes in Chan's look.

“We were channeling a bit of Liz Taylor through Gemma’s look tonight, so we felt like we needed the most dazzling diamonds as a nod to her," says Corbin-Murray, "Forevermark diamonds, especially Gemma’s 10 carat Exceptional Diamond ring did just the trick.”

As for Chan's makeup, this glam can be best described as simply elegant. Wearing a lightly shimmering silver eyeshadow and a deep liner to make her eyes pop, Chan blew fans away. For her hair, Chan wore her a sleek, straight style, bequeathed with an iconically sharp headpiece.

Bustle spoke with Owen Gould — who used Dove Hair products to create her look — to explain how he achieved Chan's campy hairstyle for the night.

"The inspiration for the hair was Cher – the perfect example of ‘Camp’ herself," Gould says. "We gave the hair extra length by using extensions, and of course the head piece. It’s an extravagant and dramatic opera-esque head piece and we added an array of gems throughout, because why not?!"

Gould also revealed the secrets to achieve the camp-inspired look for hair enthusiasts who want to try the look at home.

"After the hair is clean and smooth, use a round brush to blow dry the hair straight," he explained. "You want to keep the ends beveled under with a large barrel curling iron or flat iron. Make sure to start with a good thermal protectant and have flexible hold hairspray on hand for the finished look and to tame any unwanted fly-away’s."

You may not have noticed Chan's hands or nails, but if you look closely, they may have been the best part of her entire ensemble. "When I spoke to Gemma and Rebecca (her stylist) about the look, Gemma said she wanted to incorporate a rainbow somehow," says Betina Goldstein, the celebrity nail artist who created Chan's whimsical manicure. "Gemma is so elegant that I knew I had to incorporate something chic, yet fresh and on theme," Goldstein adds. To do this, Goldstein used Tom Ford in Toasted Sugar with individually placed gun metal diamond back crystals in ombré going down the nails. Then, she used Patty Yankee press-on nails for length. On the inside of Chan's fingers, she glued individual Swarovski crystals with the colors of the rainbow.

Chan's entire Met Gala outfit will certainly be one for the books, but it falls in line with all her other amazing outfits. The actor has genuinely been turning looks on the red carpet left and right all throughout the 2019 awards season — and doing so with pockets in every look.

In January, Chan stepped out to make her Golden Globe debut, shocking fashion lovers everywhere by proving that shorts are red carpet-worthy. Vogue reported the halter piece she wore that night was a Pierpaolo Piccioli’s Valentino Haute Couture dress and it was full of more drama than any actors' awarded performance of the night.

Chan also donned this feathery-looking Oscar De La Renta gown at the 2019 Screen Actor's Guild Awards, serving a fun silhouette on the carpet. Chan paired the look with red-bottom Louboutins, and a black belt to match.

But one of the most exciting pieces Chan wore this year was at the 2019 Oscars. The Crazy Rich Asians star was decked in hotter than hot pink Valentino. Ruched to filth, the gorgeous gown's layered look made for a dramatic outfit for The Academy's biggest night of the year.

It's safe to say fans can expect Gemma to make jaws drop every time she makes an awards show appearance.