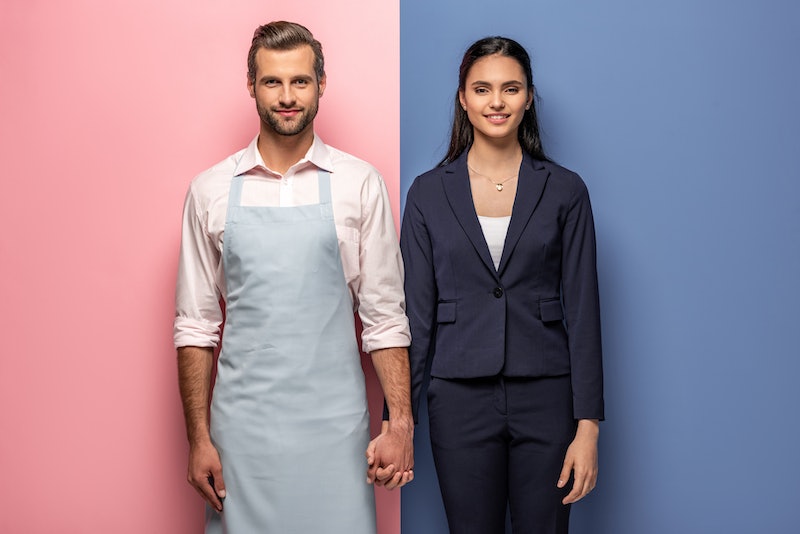 After an initial review in 2017, the Advertising Standards Authority (ASA) has finally banned adverts that feature "harmful" gender stereotypes. So say bye bye to depictions of women failing to drive a car "like a man" or a man lazing around the house while a woman does all the cleaning.

The ASA first announced the ban in December 2018, giving advertisers six months to prepare for the change. It decided to focus on damaging gender stereotypes after finding that some adverts could be "limiting people's potential," reports the BBC. Not all gender stereotypes will be banned under the new rules. For example, women can still be shown shopping and men can still be depicted as DIY fanatics.

"The issue would be if in that depiction it suggested that that's the only option available to that gender and never carried out by someone of another gender," Ella Smilie, a policy expert at the Committees of Advertising Practice (CAP), previously told the BBC. Adverts specifically aimed at children must pay careful attention to the regulation and avoid using stereotypical personalities and aspirations for boys and girls. This includes insinuating that boys have more of an academic future ahead of them than girls.

The 2017 ASA report identified six categories of gender stereotyping to watch out for: roles, characteristics, mocking people for not conforming to a stereotype, sexualisation, objectification, and unhealthy body image. (The watchdog has already implemented a ban on the last three.)

Its research concluded that advertising has a part to play in reinforcing stereotypes that "contribute to widespread assumptions and expectations about how people should look or behave according to their gender." The ASA noted that young children were more likely to "internalise" messages they see online and on TV, but adults were also at risk of being affected too.

Members of the public gave their thoughts to the watchdog, confirming that gender stereotypes are generally seen as "dated" and "not reflective of modern society." The ASA also showed a number of adverts to the public to gauge their opinion. One notable ad appeared on TV in 2017 to promote Aptamil baby milk formula.

It showed a boy growing up to be a mathematician while the girl was given a career as a ballerina. "Parents queried why these stereotypes were needed, feeling that they lacked diversity of gender roles and did not represent real life," the ASA stated. This advert did receive complaints at the time of airing, but didn't breach previous ASA regulations. Now, however, it would be a different story.

From now on, advertisers will have to work harder to infuse their work with diversity and inspiring messages. Campaigners are already calling for the inclusion of more female role models in industries such as science and firefighting, reports the Telegraph.

If you see an advert that you believe perpetuates harmful gender stereotypes, you can complain directly to the ASA. All complaints will be investigated on a case-by-case basis to ensure that advertisers aren't breaching the rules.