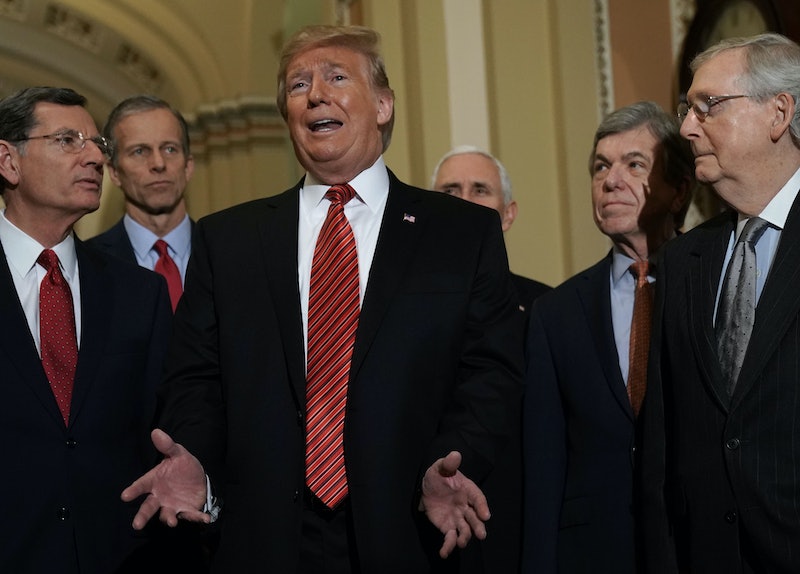 As the federal shutdown drags on toward the three-week mark, some polling data shows that Americans are increasingly blaming Trump for the situation. There are probably a couple different ways to interpret that, but for lawyer and frequent critic of the president George Conway, the government shutdown poll says something about Trump's abilities.

The Reuters/Ipsos poll found that between Jan. 1 and Jan. 7, 51 percent of Americans blamed the president for the shutdown, up from 47 percent just before Christmas. That growing number "illustrates Trump’s uncanny ability to dissuade people from his views," Conway tweeted on Tuesday night. "Competent presidents do the opposite."

The government shutdown is essentially a stalemate between the Democrat-controlled House of Representatives and the Republican-controlled White House and Senate. President Trump has demanded nearly $6 billion for a border wall, and Democrats are unwilling to include more than $1.3 billion for border security in a spending package.

On top of that, Senate Majority Leader Mitch McConnell refuses to advance any bill that doesn't include border wall funding, since the president is sure to veto it. As such, none of the House's funding bills have even made it through the Senate, let alone onto the president's desk.

The Reuters/Ipsos poll also found that only 35 percent of U.S. adults agree that Congress needs to fund the border wall and just 25 percent think that Trump is doing the right thing by keeping the government closed until he gets congressional funding. Those numbers are much higher among Republicans, however. Reuters reported 77 percent of Republicans support additional border fencing and 54 percent approve of Trump keeping the government closed until the wall is funded.

Trump's Oval Office address on Tuesday was an effort to justify his position on the government shutdown. In addition to keeping fact-checkers busy, the speech was met with criticism from media pundits and Democratic politicians alike. In a joint appearance following the president's speech, Sen. Chuck Schumer and Rep. Nancy Pelosi called Trump's wall "ineffective," and "unnecessary," and accused him of "manufactur[ing] a crisis."

Despite being married to a senior adviser in the White House, Conway has long been a critic — bordering on troll — of the president. During the Oval Office address, Conway took to Twitter, retweeting wordy critiques of the president, including one from Vox reporter Matthew Yglesias describing the "real" national emergency as Trump's presidency itself.

Last month, after his wife Kellyanne vehemently defended the president's actions following the release of Michael Cohen's now-infamous tape recordings, Conway straight-up called Trump a liar. "Given that Trump has repeatedly lied about the Daniels and McDougal payments—and given that he lies about virtually everything else, to the point that his own former personal lawyer described him as a “f*cking liar”—why should we take his word over that of federal prosecutors?" he wrote on Twitter.

Conway's criticism of Trump's fitness for office has also frequently popped up on Twitter. And as the partial government shutdown continues to drag on, it doesn't look like that's about to change.