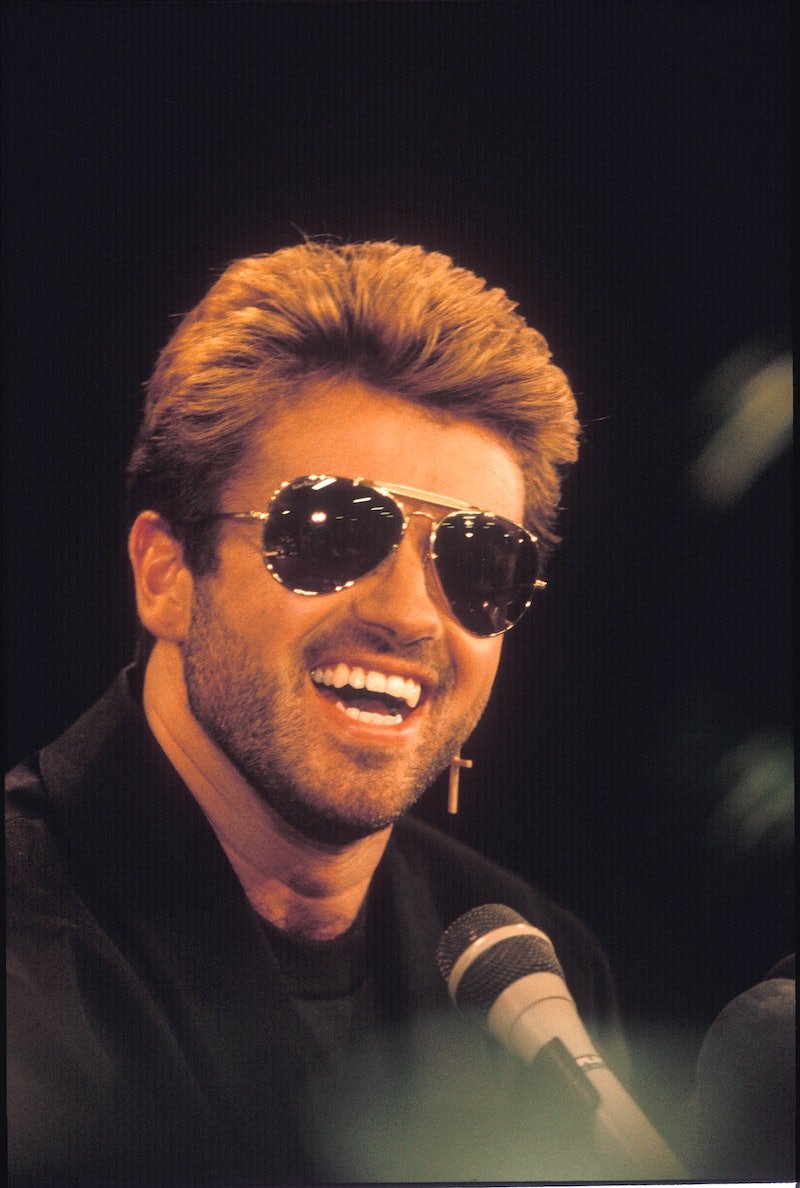 George Michael gave the world some of the most uplifting pop songs of our time, including the iconic holiday heartbreak anthem "Last Christmas". Now, fans can hear his voice on new music once again. George Michael's first posthumous single, "This Is How (We Want You to Get High)," has arrived, nearly three years after the singer's death on Christmas Day in 2016.

The new song plays over the end credits of Last Christmas, the new holiday rom-com co-written by Emma Thompson and heavily inspired by Michael's holiday hit. In the film, Emilia Clarke stars as a young English woman (and huge fan of Michael) who's down on her luck before a mysterious man (Henry Golding) comes around and changes her views on life, love, and family. Thompson also plays her mother in the film.

Thompson chose "This Is How (We Want You to Get High)" from a group of four finished, yet unreleased, George Michael songs. According to a press release obtained by Bustle, she chose it because of how well it resonated with the film's themes. The song was first written in 2012 by Michael and frequent collaborator James Jackman. The previously unreleased song was later recorded at Air Studios in London, before finishing touches were added in late 2015, during Michael's final recording sessions.

While the movie posthumously pays tribute to the musician and his music in several different ways, the film was actually conceptualized before the singer's death. In fact, Micheal actually gave the film his blessing before he died, as Thompson told Jimmy Fallon during her appearance on The Tonight Show. "He was just the loveliest guy you could imagine," she said about meeting the legendary singer in person. "And all of these themes in this movie — he was passionate about homelessness, he had this great social conscience, and he was so lovely."

Thompson was writing the script before Michael's death, and she thinks that he would have approved of the final product and how his music was used in the film. "I miss him so much and I wish he was here because I know he'd love it, 'cause the film is like being hugged," she continued.

Last Christmas premieres in theaters on November 8, and if you're an especially big fan of Michael, it might be best to bring some tissues.

More like this
Austin Butler Recalls Lisa Marie Presley Showing Him Elvis’ Bedroom
By Jake Viswanath
You’ll Definitely Recognise Isadóra Bjarkardóttir Barney’s Mum
By Maxine Harrison
Lisa Marie Presley's Secret Granddaughter Was Revealed At Her Funeral Out Of Nowhere
By Jake Viswanath
Taylor Lautner Thought Taylor Swift's 2009 VMAs Interruption Was A "Skit"
By Alyssa Lapid
Get Even More From Bustle — Sign Up For The Newsletter
From hair trends to relationship advice, our daily newsletter has everything you need to sound like a person who’s on TikTok, even if you aren’t.