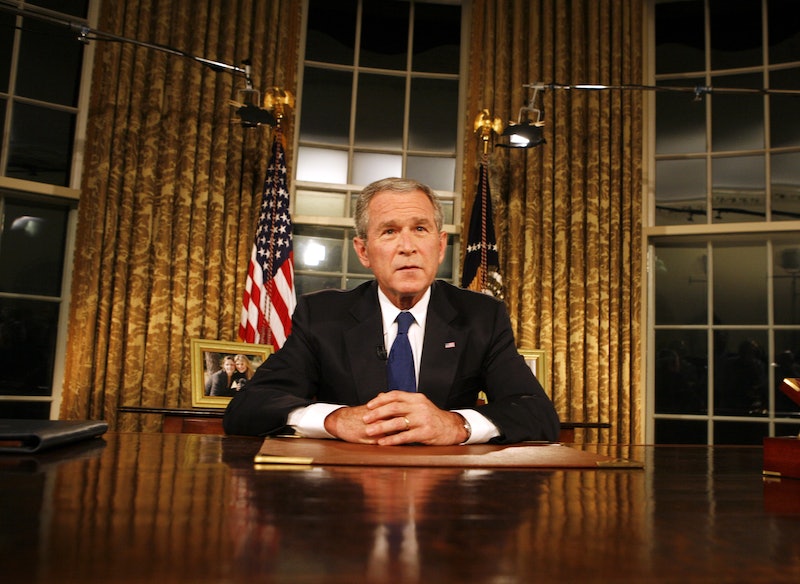 When former president George W. Bush left office in 2008, his national approval rating was less than 32 percent. A decade into his retirement, the politician's rating has done a complete 180. He now has an approval rating of 61 percent, according to a CNN poll, and he'd like to thank Donald Trump for that. Apparently Bush often jokes that he likes Trump because he makes him look good.

Despite falling into the category of "worst U.S. presidents" throughout history, largely due to the invasion of Iraq and the financial crisis of 2008, Bush feels pretty good about his administration these days. National Journal reported that the 43rd president has been known to joke that Trump's string of scandals "sorta makes me look pretty good."

"He's shaking his head like everyone else wondering why they can't get their act together," a GOP official told National Journal. "He wants the guy to succeed but thinks a lot of his problems are self-inflicted."

While Bush has been appreciating how Trump makes him look, the current president has been busy criticizing the former head of state, calling the invasion of Iraq in 2003, "the single worst decision ever made."

It might be hard to remember now, but during his presidency Bush had plenty of cringe-worthy comments that made their rounds on the internet. For instance, when he said OBGYNs were not able to "practice their love with women" all over the country. Or when he made one of his many "Bushisms," like saying people "misunderestimated him" or that he liked books because they sometimes had "fantastic pictures."

This all comes across as borderline adorable when you consider the news coming out of the White House currently. Trump has been caught on tape saying he grabs women "by the pussy." He's shown empathy for neo-Nazis following a white supremacist rally in Charlottesville, Virginia, saying there was blame on "both sides" and that some of the protestors were "fine people."

Trump's administration is also currently under investigation for allegedly colluding with Russia during the 2016 presidential election. Not to mention, the turnover rate at the White House is the highest it's been in decades. Just last week, Trump's outgoing communications director Hope Hicks announced her resignation, making her the third full-time communications director to leave the administration — she lasted the longest at 170 days.

But while Trump's White House might appear chaotic at times — by default making Bush's comments about America being "where wings take dream" seem quaint and harmless — a lot of people are pointing out that we shouldn't let that be a reason to let Bush off the hook for any mistakes he may have made. "You can call Trump dangerous and still think George W. Bush is bad," someone tweeted.

Some people think the Bushes' view Trump's presidency as an opportunity to rebrand. Both George Sr. and W. have been vocal Trump critics, with the elder Bush calling him a "blowhard" in Mark Updegrove's book The Last Republicans. "I'm not too excited about him being a leader," he said at the time. George W., who once said he feared he would be the "last Republican president," didn't vote for anyone in the 2016 election, and his father voted for Hillary Clinton.

So far, it appears like this rebranding is working. Bush's approval rating has sky-rocketed, and it's currently significantly higher than Trump's, which stands around 35 percent, the lowest level of his presidency so far.

But, still, people are skeptical of Bush's attempt to use Trump's mercurial administration to buoy his own reputation. Many believe that disliking Trump, or looking good in comparison, isn't enough to earn the Bush II administration complete redemption. But judging by Bush's joke, it sounds like he hopes it is.