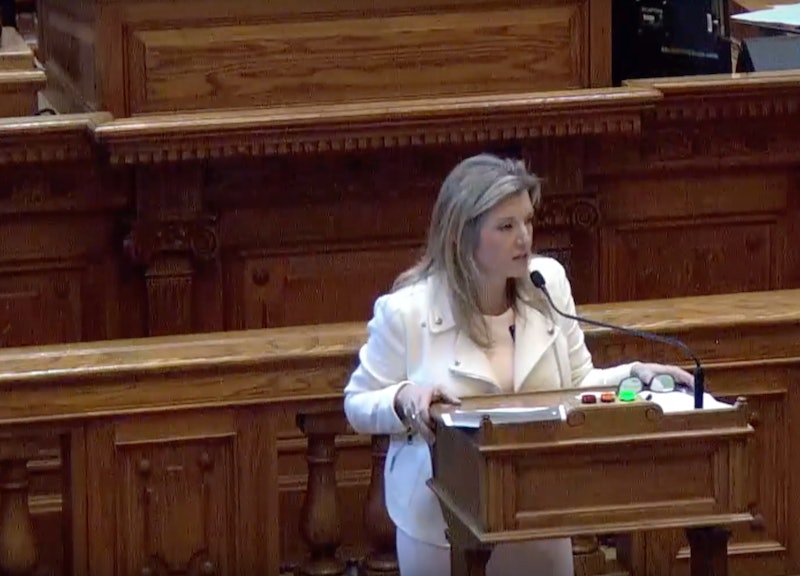 On Friday, the Georgia state House narrowly voted to pass a "heartbeat" abortion ban that would make abortion illegal following the detection of a fetal heartbeat — in some cases as early as six weeks into a pregnancy. The next day, a speech from a Georgia lawmaker who opposed the bill went viral. Georgia state Sen. Jen Jordan's "heartbeat bill" comments, which she made last week before the state's legislature voted to pass the bill, included her own personal experiences with pregnancy.

Georgia Gov. Brian Kemp has promised to sign the bill as soon as it reaches his desk, per New York Magazine, but the bill's numerous opponents shared Jordan's speech on Saturday to protest his decision. The bill, titled the LIFE Act, would expand the definition of personhood to "include an unborn child," and it would be one of the most restrictive pieces of anti-abortion legislation in the country if it is signed into law. Last week, Jordan delivered a passionate rebuke of the bill, explaining that she has been pregnant 10 times throughout her life but has only given birth twice.

“I have lost seven pregnancies in varying points of time before 20 weeks," Jordan said. “I have been escorted out the back door of my physician’s office so as not to upset the other pregnant women in the waiting area, my grief on full display and uncontainable."

Jordan added that she had laid on the "cold examination table while a doctor desperately looked for a heartbeat," and that she had "been on my knees time after time in prayer to my God about my losses."

"But no matter my faith, my beliefs, my losses, I have never, ever strayed from the basic principle that each woman, each woman must be able to make her decisions in consultation with her God and her family," Jordan argued. “It is not for the government or the men of this chamber to insert itself in the most personal, private, and wrenching decisions that women make every single day."

Jordan explained that her own experiences weren't about abortion, but they were about "the fundamental right to privacy of women," which she said was at stake in the state legislature's discussion of the LIFE Act. The decision to have an abortion is an extremely personal one, Jordan told her fellow lawmakers, and government officials should not be able to intervene in that decision.

“My husband and I were talking about this bill the other night and he told me that he didn’t want me to share anything personal because no one was entitled to that information," Jordan said. "And I have always fiercely guarded my privacy. But the deepest, darkest times of my life have occurred in the presence of and with my physician.”

Jordan told Newsweek that Georgia's "heartbeat" bill, like many other anti-abortion bills around the country, is another attempt by a conservative state to ultimately challenge Roe v. Wade before the Supreme Court. Indeed, the American Civil Liberties Union has already promised a legal challenge to the LIFE Act if Kemp signs it into law, and it would be unlikely to go into effect immediately — but it could lead to a long string of court cases, which is what anti-abortion lawmakers reportedly hope will happen.