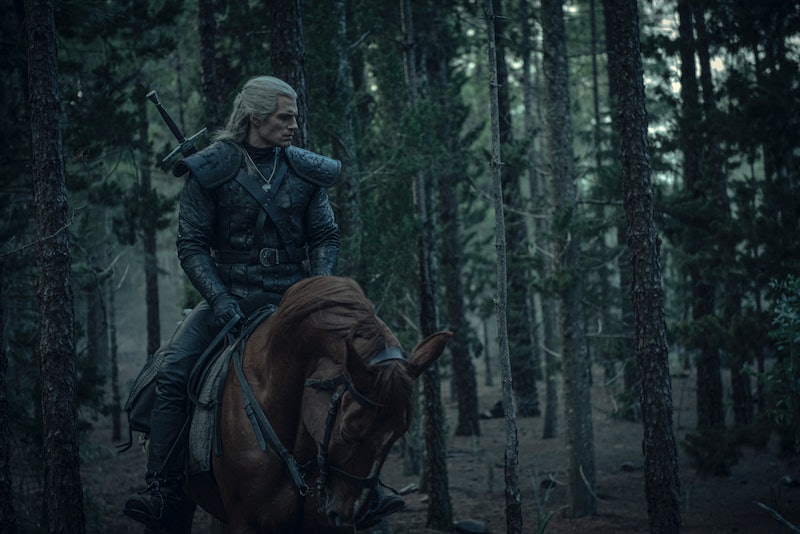 When it comes to monster hunting in The Witcher, a little bit of magic can go a long way. In the new Netflix series, Henry Cavill's titular witcher uses signs, or spells, that help protect him. While signs are considered rudimentary magic on the continent that The Witcher takes place on, they come in handy (literally) when Geralt of Rivia's two swords or potions can't get the job of beast slaying done.

The Witcher follows Cavill's Geralt, who is appropriately a "witcher" — a mutated being with supernatural abilities who hunts monsters. The TV series is based on the popular books by Polish author Andrzej Sapkowski with Season 1 focusing on the first collections of short stories, The Last Wish and Sword of Destiny. As established in Sapkowski's stories, witchers aren't sorcerers. But they can cast spells by doing specific hand gestures, called signs.

As The Witcher wikia outlines, sorceress Yennefer of Vengerberg (portrayed by Anya Chalotra in the TV series) explained signs to Princess Ciri (Freya Allan) in the book Blood of Elves. "The witchers adapted the spell, making use of the fact that it does not require knowledge of a magical formula — concentration and the gesture are enough. That's why they call it a Sign," Yennefer said. Or, as star Cavill explained in the below video, "The signs the witchers cast are basic magic, but very, very effective."

The books have also been adapted into video games, where signs are quite useful. Although, as the below fan video shows, there are some differences between the signs used in the books and in the video games.

If you're new to The Witcher universe, here are the basics on the signs from the books that Cavill's Geralt will be throwing around when Season 1 drops on Dec. 20

More like this
'The Sandman’s Ending Is A Departure From Neil Gaiman’s Comic Book Series
By Kadin Burnett
Everything To Know About 'Evil' Season 4
By Meguire Hennes
Everything To Know About The Sandman Season 2
By Kadin Burnett
Does 'Locke & Key’s Ending Mean There Could Be A Season 4?
By Sophia Moore
Get Even More From Bustle — Sign Up For The Newsletter