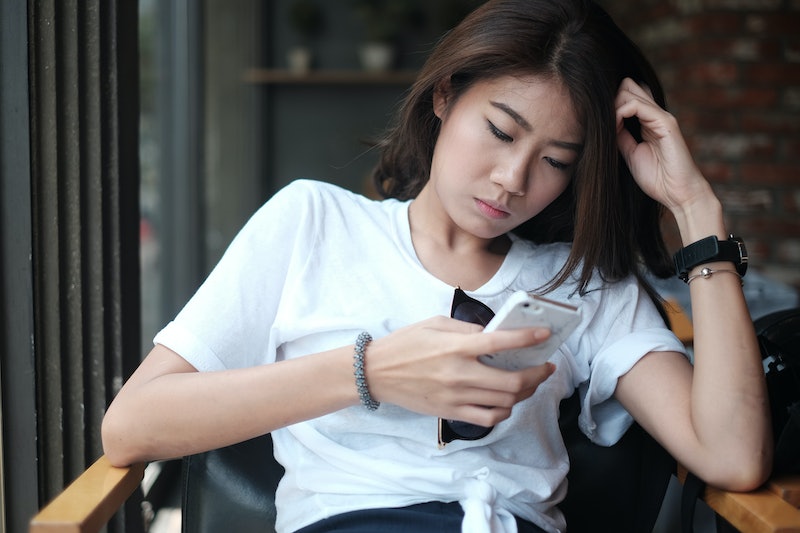 Or is it the best way? In this age of social distancing, there aren't many options when it comes to ending relationships. But when enough is enough, calling it quits over video chat is, at the very least, a way to do it face-to-face, however strange that may be.

Julia, 26, had been dating someone for two months when he decided to end it on a Zoom conference call. "We'd been talking every day [...], but also we were sort of in this weird pre-label limbo zone because we'd only gone on three dates before coronavirus," she tells Bustle. "But they were incredible dates, and there was clearly a connection."

Like many couples who are self-isolating apart, Julia was maintaining her connection with her partner by hopping on Zoom and FaceTime dates, in order to watch movies and hang out with her SO from their respective homes. "He was the first guy in a very long time I was excited about," she says.

When the fateful "you free to talk later?" text landed in her inbox, Julia immediately knew what was up.

"I had sensed him getting a little more distant the last week or so, and was anxious about it, but couldn't pin down if it was just general anxiety about the world or just in my head," she says.

Not wanting to take any chances, she quickly put on a bit of makeup before the call, which made her feel more confident and prepared, and less, as she puts it, like a "working-from-home zombie." But that didn't make it any easier.

Put plainly, breakups suck, whether it happens in-person, over text, or through a screen. But the biggest difference between doing it IRL and URL? You can't physically walk away, and closure is as nonexistent as virtual reality.

"It sucks," Julia says. "But I probably would have been pissed if it had been via text, and I'm not sure I could have stayed calm and collected if it were in person — not that that was even an option."

When budding romance is bound by the ceilings of technology, it may be best-case for relationships to die as they live: online.