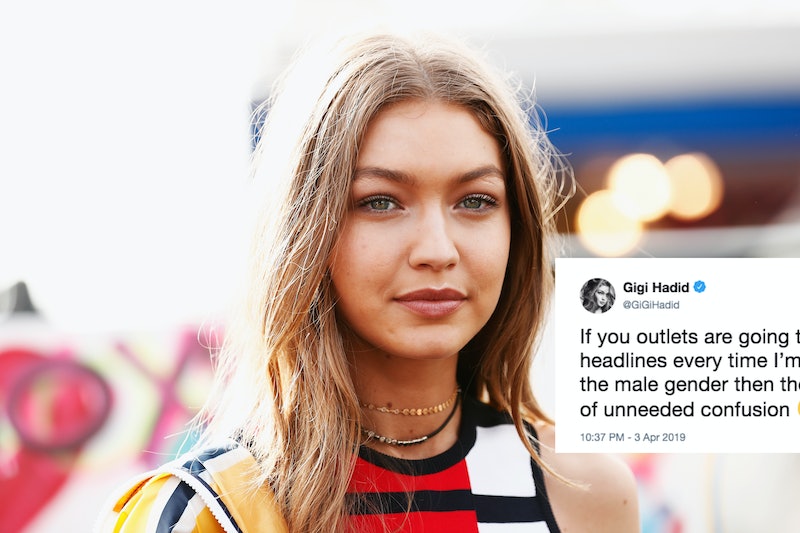 News flash: Just because a woman is seen hanging out with a guy definitely doesn't mean they're a couple. That's the message one star is conveying, after recently being snapped spending time with another celeb's former beau. On April 3, Gigi Hadid responded to speculation about dating Selena Gomez's ex-boyfriend, as Elle reported, and she was straight-up not having it.

So, Hadid is seemingly single at the moment — "very single," actually, a source told Us Weekly at the end of March. She split from Zayn Malik for the second time earlier this year, and reportedly "still has feelings for him, of course, but he has major issues and she knows they aren’t compatible," the insider claimed.

Has she moved on to someone new then? Well, according to Elle, several outlets have been reporting that she's dating Gomez's ex, Samuel Krost. Once Hadid apparently caught wind of those rumors, though, she decided to clear the air.

"If you outlets are going to continue writing bs headlines every time I’m seen with a friend of the male gender then there’s gunna be a lot of unneeded confusion," the model tweeted. She also added a few emojis for good measure: the upside-down smiley face, the not amused expressionless face, and the face-palm emoji girl.

Now, just to clarify, no specific outlets have been cited for spreading said rumors. The Daily Mail recently published a few photos of Hadid and Krost hanging out, but never alluded to a romantic relationship between the two. Other than that, it's kind of hard to track down any sources that have said that they're more than friends.

Still, though, they must be out there somewhere. Otherwise, why would Hadid have felt the need to respond? Regardless, her tweet made it very clear that outlets shouldn't waste their time speculating about her spending time with platonic male friends.

Also, whoever started spreading those rumors about Hadid and Krost definitely hadn't done any research about their relationship. The two have been pals for years now — Krost has been friends with both Hadid and her sister Bella since at least 2015.

There's a chance that the mysterious speculation might have stemmed from the combination of both the Daily Mail's photos and a few recent tweets from Hadid's ex, Malik. The former One Direction singer fired out some harsh words around the same time the pics were published, but they're all pretty ambiguous.

"How about you all go f*ck yourselves with your irrelevant bullsh*t," one of the tweets read. "This ain’t a place for feelings," read the second. "And you aren’t the person you said you were," Malik then wrote.

Now, had he tagged Hadid in one or all of those tweets, that'd be a different story. He didn't, though, so there's no way anyone can say for sure who or what they were about.

Anyway, the bottom line is that Hadid and Krost don't appear to be dating, despite what anyone has heard and read. Not judging by Hadid's recent tweet, at least, which also served as a great reminder that, yes, men and women *can* just be friends.