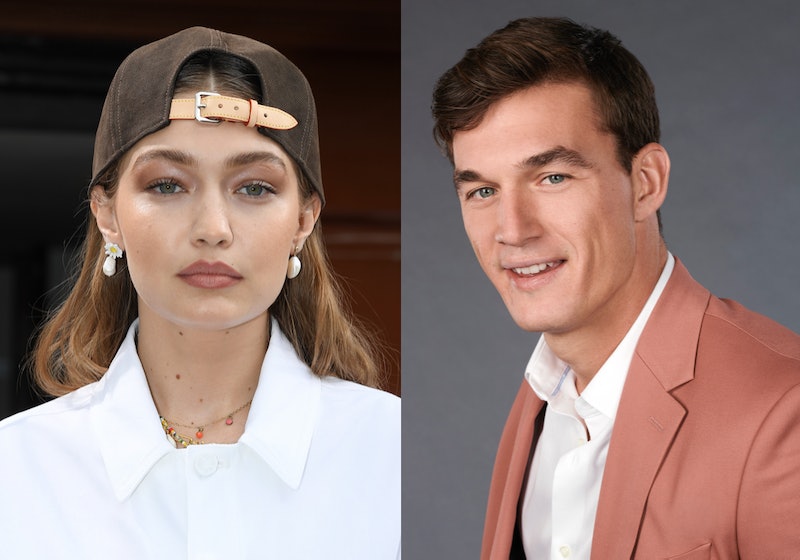 Gigi Hadid and The Bachelorette's Tyler Cameron continue to heat up the streets of NYC. According to E! News, Gigi Hadid and Tyler Cameron hung out together two nights in a row and were photographed together for the first time since they began seeing each other. And, with them both being models and all, they looked flawless during their recent hangout, surprising absolutely no one.

Tyler and Gigi are seeing quite a lot of each other lately. According to E! News, the pair hung out on Tuesday night, Aug. 13, at Justin Theroux's bar Ray's on the Lower East Side of Manhattan, one day after the reality contestant was spotted leaving Gigi's NYC apartment on Aug. 12. As seen in photos from their hangout, the rumored couple clearly had a great time together, as they could be seen exiting the bar donning some pretty bright smiles. A source told the publication that Gigi, Tyler, and a couple of their friends, "all seemed to get on great. They walked in laughing together and talking loudly. They all had a great time and were very animated as they sat around laughing and talking."

In case you were wondering whether Gigi would actually accept Tyler's rose, a source went on to tell the publication that their connection is the real deal. "There is a connection there for sure," a source revealed, "Gigi was smiling more last night than she has in a while. She just looks really happy and calm with Tyler around. It's like she is herself around him, no pretense or act." The insider also noted that Tyler and Gigi were "playing it cool" and "didn't want to get too close." But, just based on their many recent hangouts, it's safe to say that the two are getting closer every single day.

That wasn't all the source had to say about the rumored couple, as they continued to share, "Tyler likes Gigi and definitely wants to keep seeing her. He wasn't sure if it would turn into something but they are having a lot of fun and don't want it to end, that's for sure." Apparently, their connection goes beyond hanging out with friends, as an insider went on to tell E! News that the models are in consistent contact with each other. "They are seeing each other a lot and texting all day long," they said, "He's excited about her."

As previously mentioned, their Tuesday night hangout came a day after the former Bachelorette contestant was spotted leaving the supermodel's NYC apartment. And it goes without saying, but that's a pretty major indication that romance is brewing between the two gorgeous humans. Additionally, these two hangouts came almost a week after they were first spotted in public together.

As People noted, the pair were seen at Soho House together on Aug. 4 (days after Tyler was seen hanging out at Bachelorette Hannah Brown's place in Los Angeles). They were also seen having a fun night out with friends, also according to People, as they went bowling and had a karaoke session together. So, it sounds like things are moving right along for "TyGi."

From their humble beginnings as Instagram friends to their many New York City get-togethers, it certainly sounds as though things are really heating up for the already hot-as-can-be Tyler and Gigi.