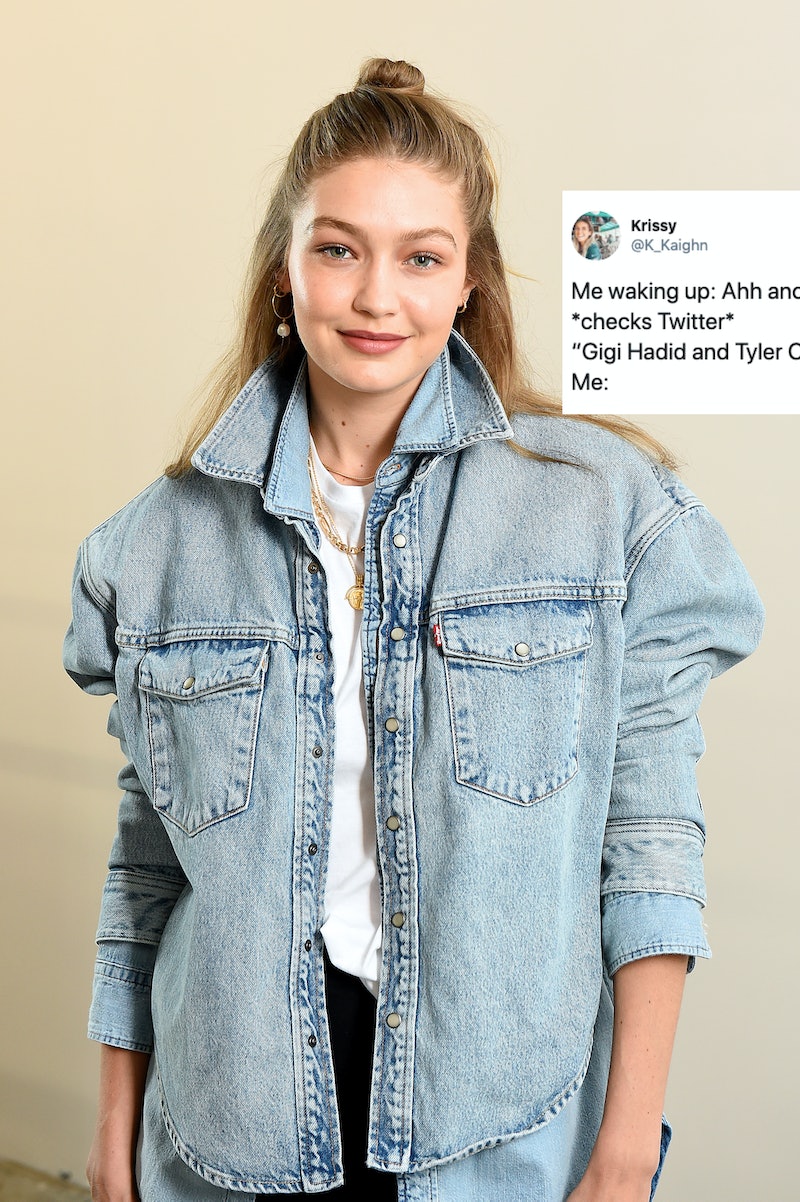 As much as many Bachelorette fans have been rooting for Hannah Brown and Tyler Cameron to get back together after they were both single at the end of her season, it looks like he's keeping his options open. On Monday night, Tyler C. and Gigi Hadid went on a second date, so it seems like they may have some potential — as much as a bummer as it is for everyone who was hoping he'd live happily ever after with Hannah. (Bustle previously reached out to both Tyler and Hadid's reps for comment on date reports, but did not hear back.)

According to E! News, a witness saw Tyler and Gigi bowling at Frames Bowling Lounge in New York, and considering the fact that they were also spotted hanging out at Soho House on Sunday (and left together), it seems like they just had two dates in a row — and as far as public knowledge goes, this is the first time they've hung out in person since connecting on Instagram.

"Gigi is definitely interested in Tyler. They met for drinks last night at Soho and they got along really well," a source told the site. "It was very casual but they were laughing and had a very engaged conversation. They are both taking things slow but have both made it clear they are interested in each other."

While it makes absolutely no sense that Tyler would miss the premiere of Bachelor in Paradise in favor of hanging out with an actual supermodel (just kidding), it really does seem like these two are into each other — unless they're just friends, which is certainly possible though not probable. So far, neither of them have acknowledged their hangouts on social media or spoken out about it quite yet.

Still, it seems like This Is Happening, especially since there's what seems to be actual photographic proof of them at Soho House on Sunday:

And fans of Tyler and Hannah as a couple are most certainly bummed, and have taken to Twitter to share their feelings.

Although both Tyler and Gigi are keeping their lips zipped about the situation so far, Hannah has already responded to the news about their dates, and it certainly sounds like she's handling it well — and if she isn't, she's not letting on.

“I’m also single and he’s single and I want to keep my options open and he can keep his options open,” Hannah told Entertainment Tonight on Monday, adding, "I am single, and people slide into my DMs if they want to, but I just got out of an engagement and dating 30 men. [Dating] is really not my sole focus right now. I’m working on Hannah and loving Hannah, and so you know, if that means going to have a drink again with somebody else, then I'm all for it."

If Tyler and Hannah are meant to be, they'll find their way back to each other. But in the meantime, it sounds like they're both enjoying being single, and after what an intense experience The Bachelorette can be, it's probably a relief for them both to put it behind them. Who knows what the future holds?