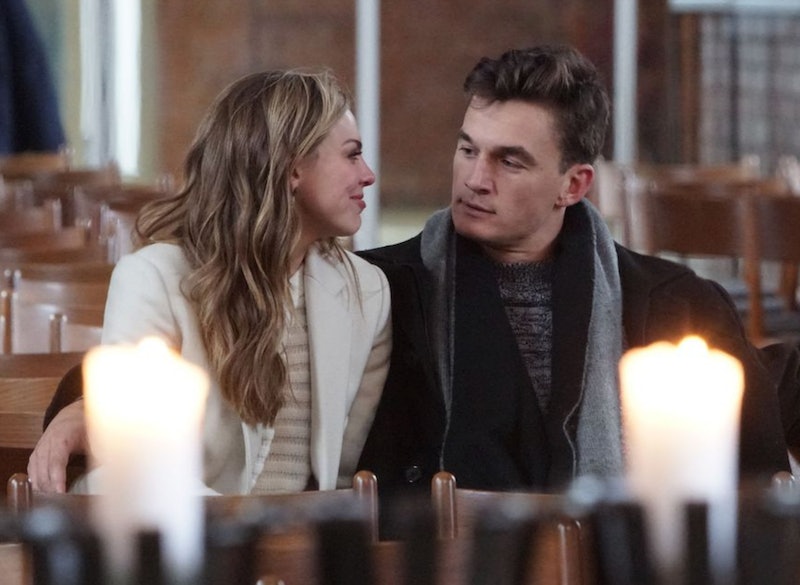 Just when fans thought Hannah Brown’s season of The Bachelorette was done chucking curveballs, runner-up Tyler Cameron was reportedly spotted with one of the most famous models on the planet. Less than a week after his date with Hannah. So how does Hannah feel about Tyler’s reported date with Gigi Hadid? Well, it sounds like she may not be too bothered by *those* photos or *those* reports. On Monday, Aug. 5, Hannah told Entertainment Tonight that while she does “have feelings" and did have a “great time” when she hung out with Tyler C. last week, they are both chill with dating around for now. “I’m also single and he’s single and I wanna keep my options open and he can keep his options open,” she said.

Hannah is not in any hurry to hop into a relationship, Tyler C. is in the same boat, and it seems like they are both more than OK with being in that casual boat. "I am single, and people slide into my DMs if they want to, but I just got out of an engagement and dating 30 men,” she explained to ET. “[Dating] is not really not my sole focus right now. I’m working on Hannah and loving Hannah, and so you know, if that means going to have a drink again with somebody else, then I'm all for it." Easy breezy.

Some context for good measure: Hannah revealed on The Bachelorette: After the Final Rose episode that aired Tuesday, July 30 that she called off her engagement to contestant Jed Wyatt when she found out the "winner" of the season wasn't so forthcoming about his pre-Bachelorette relationship. At the end of that same episode, she asked the guy who made it to the final two only to be eliminated in the middle of his proposal if he’d like to grab a drink sometime, and the Bachelorette fandom fell out of its seat. Tyler C. accepted the offer, and the Bachelorette fandom all but imploded with joy. Two days after ATFR, Us Weekly reported that Tyler C. and Hannah went out, just like they said they would. And the morning after they got The Drink, TMZ shared some photographs of Tyler C. standing outside of Hannah’s apartment. The Bachelorette fandom praised the reality TV gods.

And then, shock waves coursed through Bachelor Nation when Us Weekly reported Tyler C. and Hadid were seen at hanging out at Dumbo House in Brooklyn on Sunday, Aug. 4. And then, even more shock waves hit when a source claimed to Us Weekly that the two allegedly went back to Hadid’s place that evening. Tyler C. and Hadid, who happen to be friends on Instagram, have yet to address these scoops.

Meanwhile, the king of Bachelor Nation has addressed these scoops, and he's made it clear that he is totally OK with the idea of Tyler C. possibly going out with someone else. As Chris Harrison told E!'s The Daily Pop, "Good on him. He's not committed anywhere, so that's great. Have all the playdates you want."

Neither Hannah nor Tyler C. wants to settle down, and based on what Hannah told ET after the Tyler C. and Hadid reports surfaced, it seems like there isn't any drama. Hannah Beast? More like Hannah Breezy.