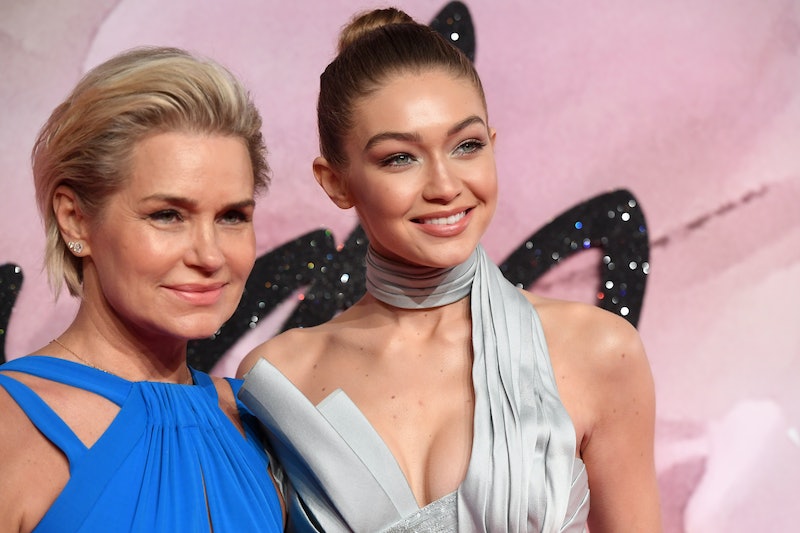 This mother-daughter duo has always been tight-knit. On Sunday, Gigi Hadid posted a Mother's Day message for Yolanda Hadid on Instagram, sharing a throwback photo sitting with her mother, who was pregnant at the time, on the beach. Hadid captioned the photo with a sweet message for her mother, writing, "Best I could ever ask for."

She also wished a Happy Mother's Day to "the one I’ll do my best to emulate," a nod to the recent news that the model is expecting her first child with Zayn Malik. Hadid added a final message for her mother, writing, "I love you beyond words @yolanda.hadid you are a superhero!!!!!" Yolanda commented on her daughter's post, sharing a heart emoji and writing, "Thank you my love."

On her Instagram Story, Hadid also shared plenty more throwback photos of her mother, including snaps of the two together from her childhood, runway shows, and her mother's own modeling pictures. Hadid is celebrating the holiday on Yolanda's farm in Pennsylvania, where the family has been self-quarantining amid the coronavirus pandemic, as per People.

Rumors that Hadid was pregnant began in late April, after TMZ speculated that the star was approximately 20-weeks along. On April 30, Hadid confirmed she was expecting her first child with Malik during an appearance on The Tonight Show Starring Jimmy Fallon, telling the host, "Obviously, we wish they could've announced it on our own terms, but we're very excited and happy and grateful for everyone's well-wishes and support."

Yolanda also confirmed her daughter's pregnancy, and expressed her excitement during in an interview with Dutch publication RTL Outlet in April, as well. "Of course we are so excited," she said. "I'm excited to become a Oma in September especially after I lost my mom so recently. But this is the beauty of life: One soul leaves us and a new one comes in. We feel very blessed."

Malik has yet to comment on becoming a father publicly, but the former One Direction star has appeared in plenty of recent social media posts with his girlfriend. On April 24, Hadid shared pictures from her 25th birthday, including several photos embracing Malik. She wrote: "Had the sweetest day celebrating my 25th birthday with my quarantine family, who made it so special for me, along with all the love I felt from all over the world!"

It's not yet clear when Hadid and Malik are expecting their first child, nor have the two confirmed if their baby will be a boy or a girl. Yet, it's clear that Yolanda has given her daughter a great parenting example to follow.

More like this
Gigi Hadid Gave Up One Surprising Thing After Having A Baby With Zayn Malik
By Alyssa Lapid
Kylie Jenner Clarified How To Pronounce Her Son's New Name
By Jake Viswanath
'Abbott Elementary' Fans Probably Missed This 'Parent Trap' Easter Egg
By Sam Ramsden
Paul Rudd’s Secret To Eternal Youth Is Something You Can Try At Home
By Darshita Goyal
Get Even More From Bustle — Sign Up For The Newsletter
From hair trends to relationship advice, our daily newsletter has everything you need to sound like a person who’s on TikTok, even if you aren’t.