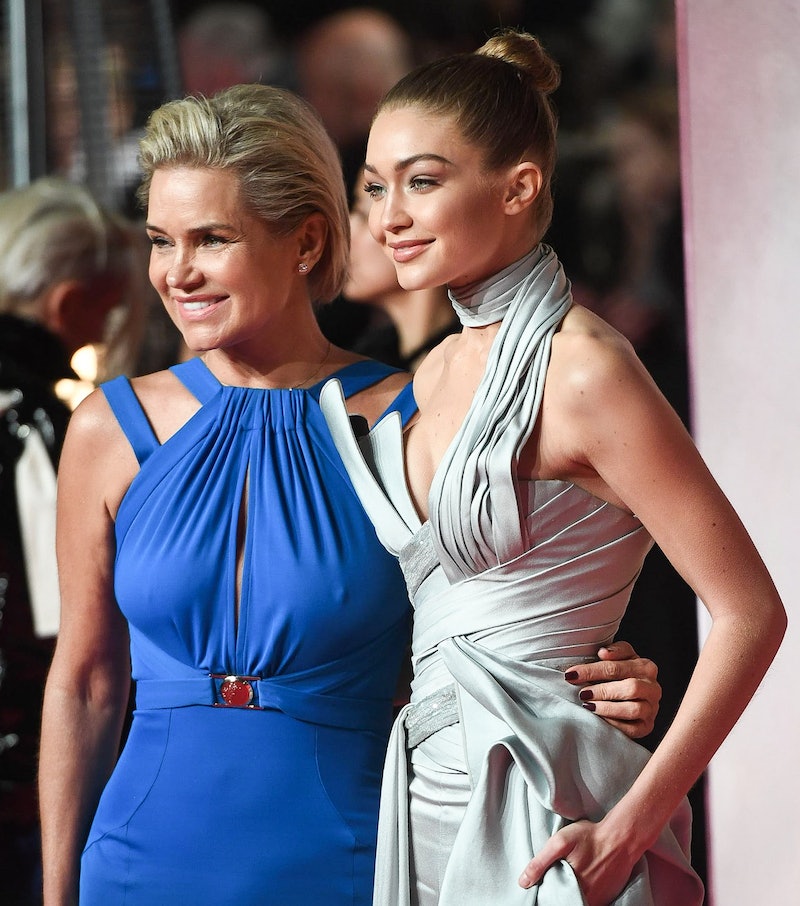 Just days after news broke that she could have a grandchild on the way, Yolanda Hadid has reportedly confirmed Gigi Hadid's pregnancy. Dutch broadcasting station RTL Boulevard shared an interview with the Real Housewives of Beverly Hills alum in which she seemingly confirms her daughter and boyfriend Zayn Malik are expecting their first child. Bustle has reached out to reps for Hadid to confirm the quote, and Gigi on her reported pregnancy, but did not receive an immediate response.

In her interview, which has been translated from Dutch to English, Hadid reportedly said, "Still shocked our little secret got leaked to the press. Of course we are so excited. I am excited to become Oma in September especially after I lost my mom so recently." The quote continued, "But this is the beauty of life; one soul leaves us and a new one comes in. We feel very blessed."

While the original interview hasn't been verified, E! News reported that Hadid liked Elle UK's Instagram post that includes a reported quote from her that reads, "I can't wait to become a grandmother." So far, Gigi and Malik have not commented on the reports or mentioned that they might be expecting on social media. Still, sharp-eyed fans think they've spotted clues that there's a baby on the way on Gigi's Instagram.

Fans noted that in a recent post celebrating her 25th birthday, Gigi appears to be holding balloons with blue and pink strings, as per E!. Gigi's sister Bella also seemed to give her sister gifts in baby-themed bags. However, given that the Hadid family is quarantining like everyone else right now, availability may have factored into her choice.

Despite the couple not commenting on the news, a source recently claimed that they are thrilled with the news. "Gigi and Zayn are expecting their first child together and the couple is very excited! Gigi has kept the secret close to her family and friends for a while, as she’s only a few months along," the source claimed in an interview with Entertainment Tonight. "Once Gigi and Zayn got back together at the end of last year, it was like they never skipped a beat and knew what they had was special. The couple and their families are overjoyed." The source also reportedly revealed that couple is expecting a girl.

If Gigi and Malik are expecting, fans shouldn't be to too surprised since they seem to have had babies on the brain for a while now. In February, the model told i-D magazine, "I think that as I get older... well one day I’ll start a family and I don't know if I will always be modeling." It's still unclear if that "one day" is now, but if it is, it seems Yolanda is more than ready to welcome her first grandchild.

More like this
Gigi Hadid Gave Up One Surprising Thing After Having A Baby With Zayn Malik
By Alyssa Lapid
RHOP’s Robyn Dixon Explained Why Juan Paid For Another Woman's Hotel Room
By Brad Witter
Kylie Jenner Clarified How To Pronounce Her Son's New Name
By Jake Viswanath
Vanessa Hudgens Is Reportedly Engaged To Cole Tucker
By Jake Viswanath
Get Even More From Bustle — Sign Up For The Newsletter
From hair trends to relationship advice, our daily newsletter has everything you need to sound like a person who’s on TikTok, even if you aren’t.