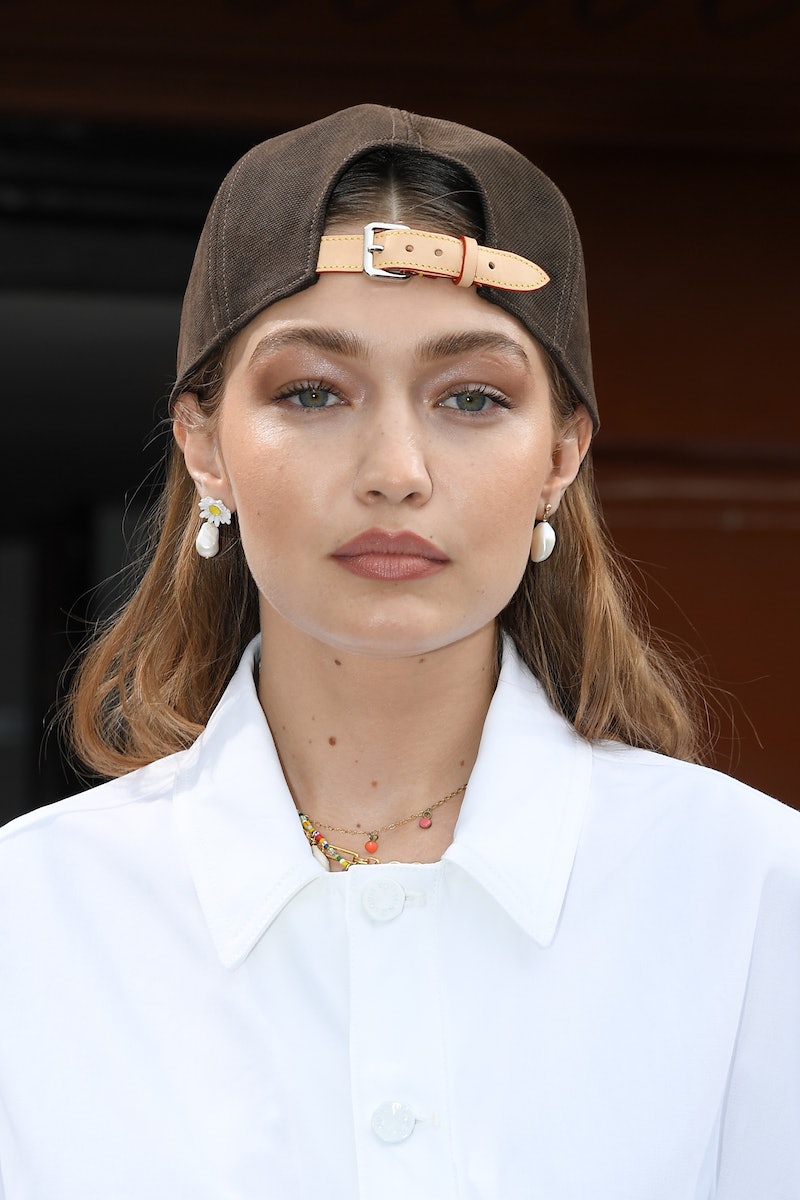 Gigi Hadid is reportedly dating Bachelorette runner-up Tyler Cameron, and they have been spotted doing everything from going on vacation in upstate New York to getting dinner in Soho. It was at that Soho dinner date that Gigi Hadid wore an $8,000 Jacquie Aiche Eye Necklace, but this wasn't the first time that the model wore the pricey chain.

The couple's Soho dinner date included some of Hadid's friends, specifically Serena Williams. Hadid dressed casually for the event, wearing a pair of baggy faded denim jeans and a white peplum blouse. The jeans were the "Playback Jean Skream" pair from ksubi + Kendall Jenner's "Sign Of The Times" collection. But being Hadid, the model was sure to accent her impromptu dinner date look with a few choice accessories. While Hadid probably has a vast jewelry collection, the interesting thing about the model is that she likes to wear the same necklaces over and over. One of which is her Jacquie Aiche Eye Necklace.

Aiche grew up in a multi-cultural home with both Egyptian and American parents, and she incorporates Middle Eastern influences of hammered gold, amulets, and goddess imagery into her designs. The necklace that Hadid is now prone to wearing is called the Pave Turquoise Inlay Eye Necklace. The pendant is strung up on a bezel chain accented with six diamonds. And seeing how the necklace costs $8,000, Hadid is focusing on her cost-per-wear because she has worn it on a number of different occasions.

The most recent was during Hadid's Soho dinner date with Tyler C. and Williams. (She also wore her Missoma Axiom Chain, which Hadid has been wearing for about two months straight now.)

Hadid has been wearing the pendant necklace all week long, and that's not an exaggeration. On Aug. 19, Hadid was spotted wearing the turquoise necklace with a white boxy blazer, graphic tee, Missoma Axion Chain, and Aritzia bike shorts.

On Aug. 14, Hadid was running errands in Manhattan while wearing a grey t-shirt, Bermuda denim jeans, and the Jacquie Aiche necklace.

Hadid also wore the turquoise necklace during her trip to Upstate New York with Tyler C. and her group of friends. Hadid casually wore it while in a boat on the lake, as one does. She paired the pendant with a $48 long sleeve shirt from Petals and Peacocks and her trusty Missoma chain.

Rewind a couple of months, and Hadid was spotted wearing the same evil eye pendant in Coachella. She sported the necklace on the first day, matching it with a tie-dye vest and a jumble of colorful chokers and chains.

The $8,000 pendant also came along with Hadid when she took a skiing holiday in March 2019 with her friends Liv Perez, Cully Smoller and Olivia Culpo.

Also in March, Hadid went to Paris to attend the Tommy Hilfiger x Zendaya fashion show. To the event she wore a belted maroon leather dress from the collection, and her trusty Jacquie Aiche pendant.

While the necklace might cost as much as a semester of tuition, Hadid clearly wears it more often than not.