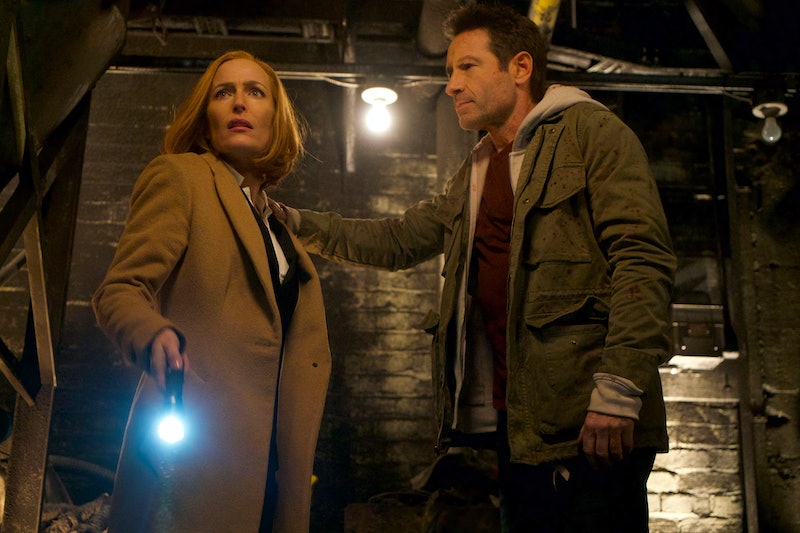 Even the most devoted fan of The X-Files has to admit that Season 11 was divisive, and that's due in large part to the treatment of Scully. Now it appears that Gillian Anderson has responded to The X-Files season finale on Twitter, and her tweet is a reminder that she still has her character's back all these years later. While the 49-year-old doesn't explicitly call out the show, her use of an exasperated Scully gif alongside the caption, "Oh boy oh boy do I ever hear you" seems to be pointed at the finale.

"My Struggle IV" wrapped up Season 11 with a series of confusing cliffhangers that ultimately led to Scully telling Mulder she's pregnant. Her news comes after she has a total non-reaction to the presumed death of William, whom she calls an "experiment" and claims she was never a mother to. All of it felt out of character and bizarre — particularly Scully having yet another miracle pregnancy despite her ova being harvested when she was abducted in Season 2.

People seem to have strong feelings about the finale, and some fans and critics haven't held back when criticizing how the show handled the reveal that Cigarette Smoking Man medically raped Scully. In fact, the finale not only had Scully discover the news of her son's origin off-camera, it also focused more on Mulder's loss, with him questioning who he is if he's not a father. That particular moment leads to Scully revealing that she's pregnant... and yes, it's problematic. As i09's Jill Pantozzi wrote in her review,

"Chris Carter let Scully languish this entire episode only to use her as a baby vessel again. Because, you know, that’s apparently all she’s good for."

If Anderson is throwing some shade the finale's way, could anyone really blame her?

In December, Anderson made headlines when she said Season 11 would be her last. Her decision to walk away from the iconic Scully was hard for fans to accept, but in light of the finale, it makes sense. While it's entirely possible that the actor is simply ready to take on new roles, her decision to let Scully's story come to an end could also be tied to the treatment of the character.

Scully means a great deal to a generation of fans. She's a scientist, a hero, and a woman who never seems to run out of fight. However, she's also faced serious mistreatment in the hands of the writers who constantly take away her reproductive agency. When she confirmed her plans to exit the series to TV Insider, Anderson said,

"Given the importance The X-Files had in people's lives, it's great to have one more opportunity to end on a high."

But how does she feel now that Season 11 is over? Aside from her tweet, Anderson hasn't discussed the finale or how she feels about the potential last scene of Scully featuring the character announcing she's pregnant. As reported by The Nerdist, the actor couldn't offer up a definitive answer about whether or not she thought Scully was given a proper farewell during an interview at the 2018 Winter Press Tour in January. She reportedly told the audience,

"That is a good question. I'm not quite sure how to answer that question. Let's say I'll think about it."

Anderson may finally have answered the question with her tweet, and if she truly was expressing her displeasure with the finale, then that only makes Scully's ending all the more frustrating.

Scully and Anderson deserved a better ending after more than two decades of The X-Files. And even though series creator Chris Carter wasn't interested in giving them one, at least fans can be comforted by the knowledge that Anderson will always be looking out for Scully's best interests — even if that means saying goodbye to the character for good.