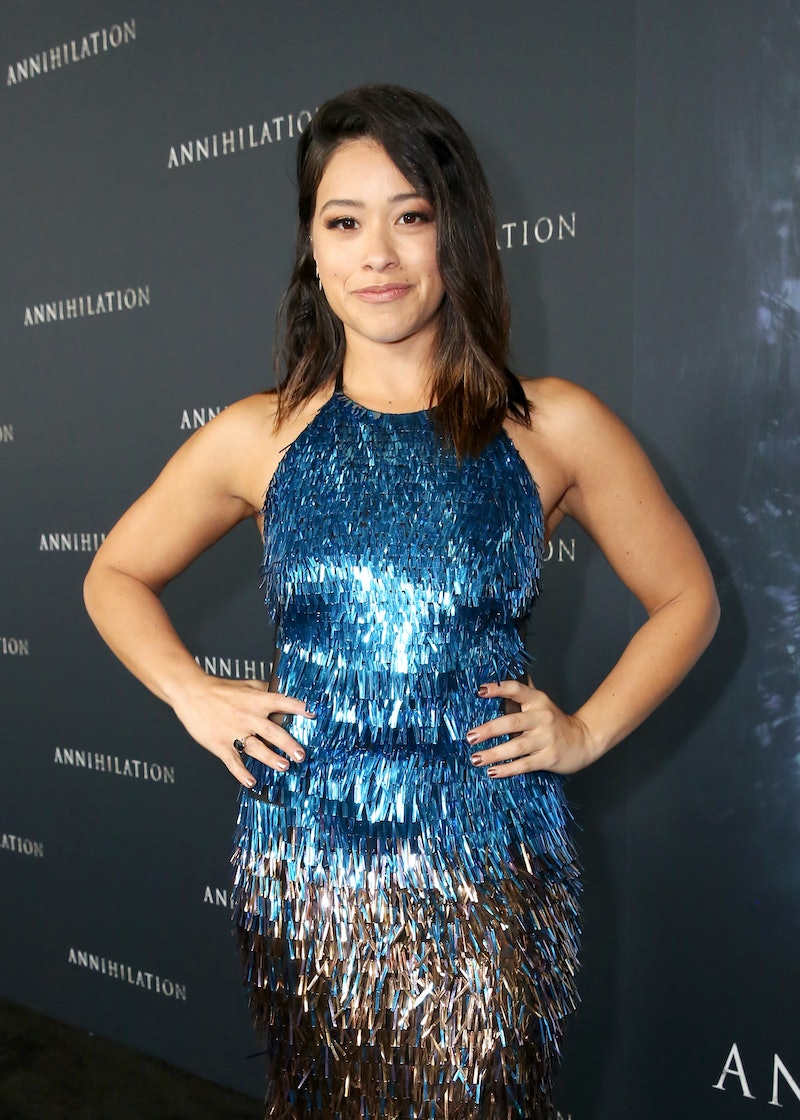 After her first apology for using the N-word was perceived to be disingenuous, Gina Rodriguez released a new apology early on Wednesday. In a written statement shared on Instagram and sent to Bustle, Rodriguez said she's sorry for saying the slur while rapping along to the Fugees' "Ready or Not" in an Instagram Story video. And this time, instead of qualifying her apology with an "if I offended you," the actor made clear she regrets her actions, recognizing that she has some "growing to do."

Rodriguez's new apology echoes her initial video response, which left much to be desired. The actor's first attempt received criticism for not acknowledging why her action was wrong and for putting the burden on the people who were offended. "I'm sorry if I offended anyone by singing along to the Fugees, to a song I love, that I grew up on," she said via Instagram Story. "I love Lauryn Hill, and I'm sorry if I offended you." This time around, although she still referenced her love for the Fugees, Rodriguez acknowledged the hurt caused by her actions.

"The word I sang, carries with it a legacy of hurt and pain that I cannot even imagine," she wrote. "Whatever consequences I face for my actions today, none will be more hurtful than the personal remorse I feel."

"Watching my own video playing back at me, has shaken me to my core. It is humiliating that this has to be a public lesson but it is indeed a much deserved lesson," she continued. "I have some serious learning and growing to do and I am so deeply sorry for the pain I have caused."

However, her second apology attempt has also gotten some backlash on Twitter. In particular, her line about feeling "so deeply protective and responsible to the community of color." Some people have called her out for not stating that her use of the N-word is specifically offensive to the black community rather than the community of color at large.

Adding to the controversy, Rodriguez has previously made comments that were interpreted as anti-black. During a press junket for Smallfoot in 2018, Rodriguez interrupted interviewer Xilla Valentine when he called her costar Yara Shahidi a role model for young black women. "So many women," Rodriguez stated. Later that year, she said that black women were paid more than Latina women in a Net-a-Porter interview, a comparison that many found offensive and counterproductive. At the time, author Sofia Quintero, for example, tweeted that Rodriguez's activism for the Latinx and Latina community shouldn't come at the cost of the black community.

The Jane the Virgin star later addressed these criticisms during an appearance on Sway in the Morning. In the radio interview, Rodriguez tearfully addressed her own cultural identity, saying that her father was "dark-skinned, he's Afro-Latino," and that being called "anti-black" was hurtful because it was like "saying I'm anti-family." In that same interview, she also clarified that she meant to be intersectional regarding equal pay in her Net-a-Porter interview. All of this has made fans and critics a bit more skeptical when it comes to her apologies.

Rodriguez's second apology may be unsatisfying to some. But to others, it shows that the Jane the Virgin actor is still open to learning from her mistakes — even if those mistakes have been repeated.

More like this
Diane Warren Apologizes To Beyoncé For Shading The Amount Of Songwriters On “ALIEN SUPERSTAR”
By Jake Viswanath
Demi Lovato Explains Why She's Now Using She/Her Pronouns Again
By Alice Broster and Radhika Menon
Who Is Camila Cabello Dating? She's Getting Cozy With Lox Club CEO Austin Kevitch
By Radhika Menon
Taylor Swift & Her Mom Clap Back Against The “Shake It Off” Plagiarism Lawsuit
By Jake Viswanath
Get Even More From Bustle — Sign Up For The Newsletter