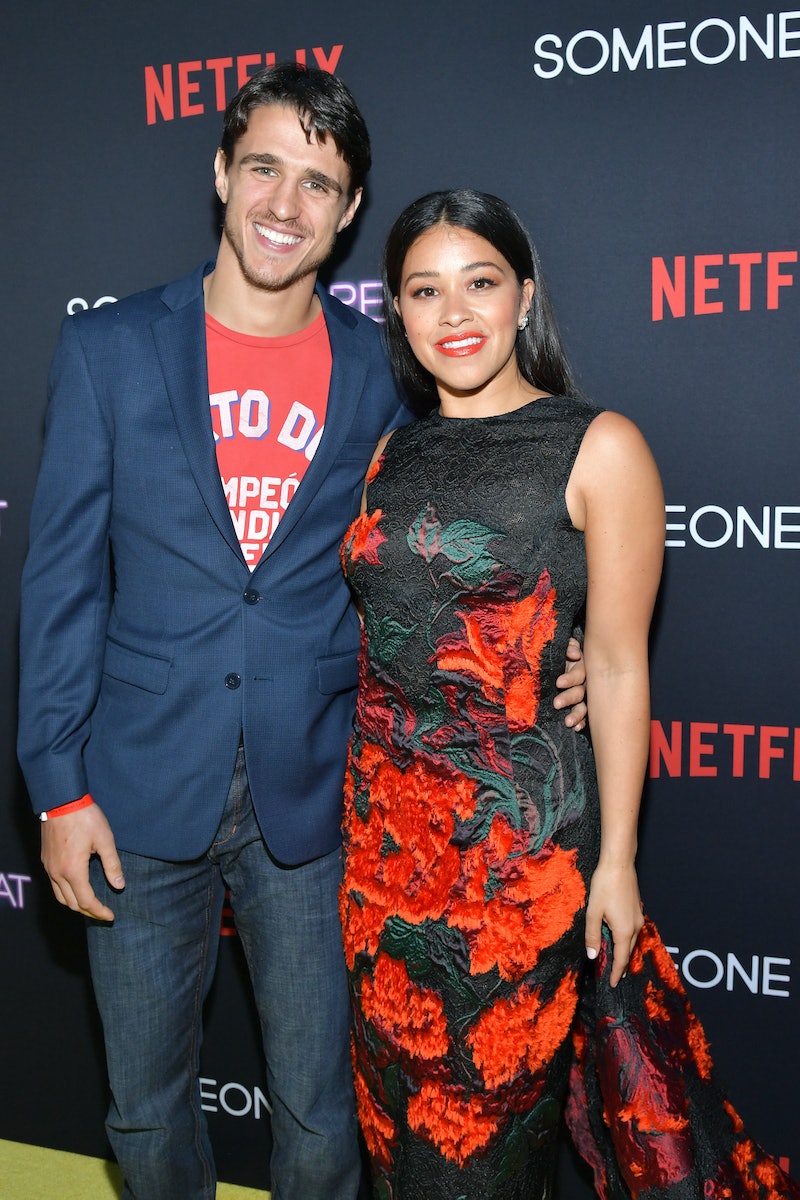 It can't be easy to pull off a secret wedding when you're a celebrity, but somehow, this Jane The Virgin star managed to make it happen flawlessly. On Monday, Gina Rodriguez announced she married Joe LoCicero on Saturday, and no one was the wiser until the shared the news with an adorable video of their nuptials that she posted on Instagram two days later.

Alongside the video, Rodriguez took the opportunity to thank everyone who had been a part of making her special day happen in her caption, including Jane The Virgin costar Justin Baldoni, who acted as the officiant at her wedding. Rodriguez wrote:

"'With that one kiss we got 100 new family members' my 9 year old niece, Mia. Thank you to my mother in law for the wedding of my dreams. And the village that helped her! Special thank you to our soul brother @justinbaldoni and my new brother for singing me down the aisle Michael LoCicero @mikelosaurusrex. Love to our Videographers: @harrisonfilms. To the greatest wedding planner, Laura @coutureconceptsny. The genius behind the gorgeous flowers, Akvile @florasavenue. And to our friend and brilliant Photographer: @sylvain_vincent. May 4th, 2019 was absolute MAGIC. To my husband Joseph, I am yours forever."

Rodriguez was right to thank her videographers, because the footage is truly beautiful. It covers everything from their special day, including the bride and groom getting ready for the wedding to the tears in LoCicero's eyes as he watched Rodriguez walk down the aisle.

Clips from their reception are also included, with footage of their friends and family out on the dance floor, and it seems like everyone had a really good time. The video ends with the focus all on Rodriguez and LoCicero dancing, capturing what seemed to be a truly sweet moment between the two of them.

Last August, Rodriguez confirmed her engagement to LoCicero in an interview with People after hinting that they might be getting ready to plan a wedding to several different outlets.

"I am [engaged]! He’s the best," Rodriguez told the magazine at the time. "He’s the f—- best. We’ve been engaged for like a month — I’ve kept it a secret for a while."

Although Rodriguez and LoCicero have done their best to keep their relationship pretty private (much like their wedding), the actor has spoken out about her now husband every now and then. Back in January, she talked to Cosmopolitan about what being with LoCicero was like, and how he always encouraged her to shine. Rodriguez said:

"Dating Joe was a new experience for me because I put myself first. For so long, I put every man in front of me. As a successful woman, it is so hard because of our cultural norms that, like, the man has to be the breadwinner! And the man has to be the more powerful one. It was so difficult for me to find a man who didn’t want me to dim my light for his ego."

And now, Rodriguez and LoCicero are living happily ever after — and hopefully, photos of their beautiful wedding to go with the video aren't far behind.