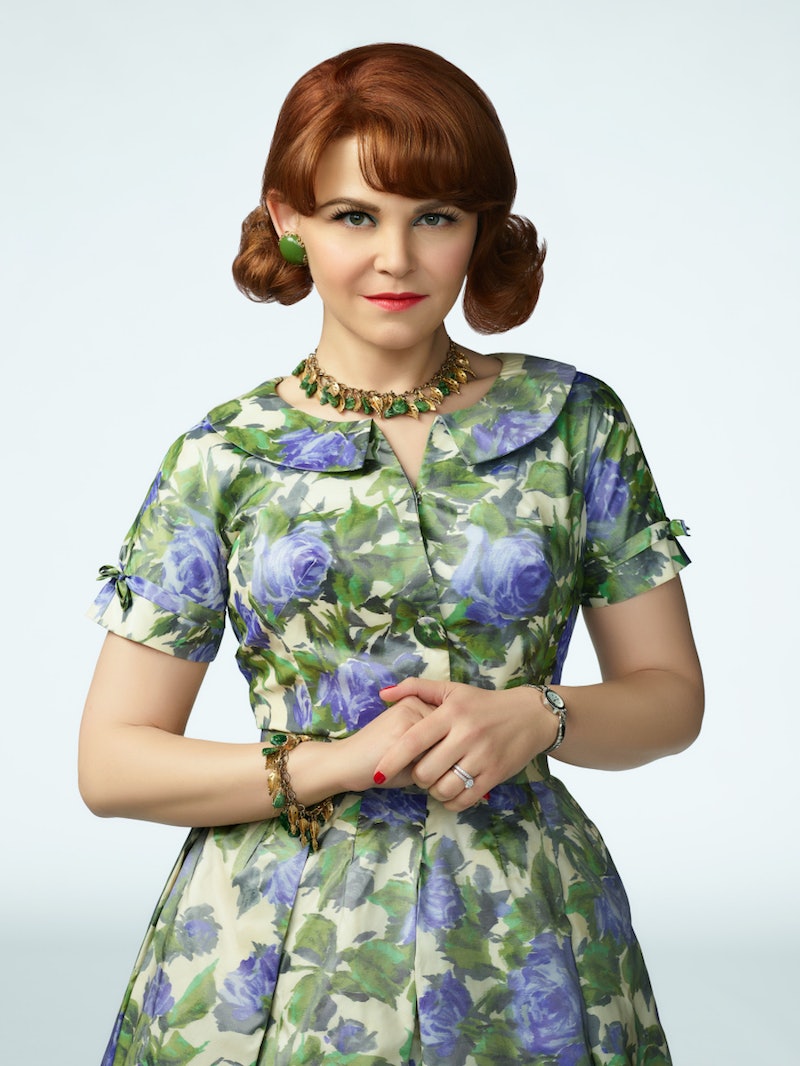 What might push a woman to off her husband? Is it money, or an unhappy marriage, or a discovery that he cheated? The Why Women Kill trailer might lead you to believe that it's infidelity that causes women to snap, but according to Why Women Kill star Ginnifer Goodwin, the CBS All Access show is about much more than that.

Why Women Kill introduces us to three married women, all living in the same lavish house during very different time periods: Beth Ann (Goodwin) in the '60s, Simone (Lucy Liu) in the '80s, and Taylor (Kirby Howell-Baptiste) in present day. Each woman faces an issue distinct from the rest: Simone discovers her husband is gay, and Taylor, though polyamorous, finds her husband lusting after her girlfriend. Beth Ann, meanwhile, has to keep up appearances and be the perfect housewife, all while knowing her husband Rob (Sam Jaeger) is nonchalantly committing adultery.

"Women have, in history, been so defined by their eras. They are so defined by the limitations and boundaries inherent to those times," Goodwin tells Bustle, explaining how, out of all the Why Women Kill protagonists, Beth Ann has the least amount of social mobility, even after discovering her husband's penchant for a late-night rendezvous. "She does not have the opportunities that women today do have. She has no opportunity for income outside of the support of her husband." That makes it particularly difficult for her to move beyond her circumstances while her husband is out cavorting with other women.

"She has no self worth," Goodwin continues. "She was taught that the only good that she could provide would be in the care-taking of a husband."

Unlike Howell-Baptiste's high-powered lawyer Taylor or Liu's '80s socialite Simone, Beth Ann's position as a woman in the '60s entirely defines who she is and what her options are. She essentially suffers from what Betty Freidan's The Feminine Mystique (which makes an appearance in the pilot episode) calls "the problem that has no name" — she's reached what society deems is "true feminine fulfillment," and yet she's unhappy. Though she doesn't know it yet, Beth Ann has discovered the limits of the suburban housewife idyll.

This is further compounded by the fact that Beth Ann is, in actuality, a '60s housewife stuck in the '50s — eagle-eyed audiences may notice how Beth Ann's clothing and hairstyle are about a decade out of fashion. "Her growth was stunted at a point in the '50s that we'll learn more about over the course of the series," Goodwin reveals, hinting at a past trauma that's brought up in the pilot episode. "She's like the perfect '50s housewife stuck in the '50s."

Though we know the '60s were a time of great cultural upheaval — with women entering the workforce, demanding equal pay, and using contraception — Beth Ann's transformation will be much more gradual. Goodwin says Beth Ann is a "problem-solver" and that, at least at first, she's "always trying to do what is best in the name of healing her relationship."

Cue the scenes from the trailer in which Beth Ann attempts to entice her husband back by arriving naked to the dinner table. Later, she tries to impress him by performing then-taboo oral sex.

"Religiously, socially, it's known that there is no out, there is only making it work. She is pre-feminism," explains Goodwin.

The changes Beth Ann undergoes may not be what we consider revolutionary by present day standards, but Goodwin is clear that Beth Ann will discover what it means to comfortably be Beth Ann, not just Beth Ann: The Housewife. "What's interesting to me is that her journey is always about this relationship, and she doesn't realize that she's having her awakening. She doesn't even understand that she is blossoming. That she is becoming deserving of self-worth ... I don't think she will ever really see it. But we will as an audience watch her grow. We will watch her become a completely different human being."

Is Beth Ann's "awakening" a recipe for murder? Maybe, maybe not. Goodwin explains that Rob's cheating is not the immediate, or even sole reason why he — or somebody else, as Why Women Kill cleverly doesn't show who the victim is — is killed. "I think that we will all be desensitized to even the infidelity because of the other dark things that will happen," Goodwin reveals.

As is fitting for a Marc Cherry production (Cherry created Desperate Housewives, after all), the road to murder is going to be a long and winding one, and the mystery of who died in that house may not be solved until much later. "I can't say if there's anything predictable about what is going to happen," Goodwin adds. "[Everyone] is going to think that it's all about one thing. And then when it's all about something else, you will go back and see that we have laid out the breadcrumb trail for you since the beginning ... The infidelities are the sparking incident. But they're not the whys."