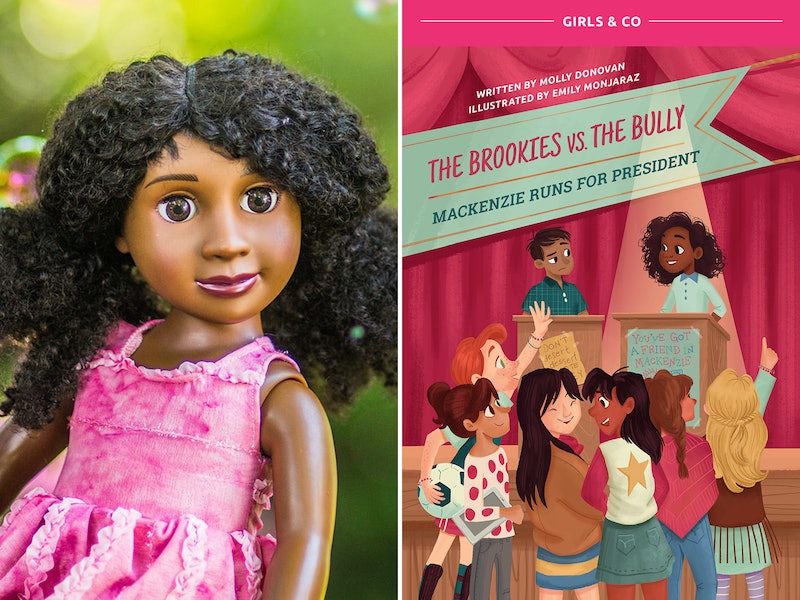 A new children's book wants to get girls talking about politics. The Brookies vs. the Bully is the latest release from Girls & Co, and its story will be strikingly familiar to anyone who — for better or worse — remembers the 2016 election. In an interview with Bustle, author Molly Donovan speaks about the importance of political and career-focused narratives for young girls in the current climate, so keep reading to find out more about the book and its background.

As you can see, Girls & Co's offerings bear some resemblance to the book-and-doll pairings from American Girl. Mackenzie and her friends — the titular "Brookies": Anjali, Bailey, Cara, Maya, Perry, Rory, and Rowan — will eventually all be available as 18-inch, soft-body dolls, but only Anjali, Cara, and Rowan are available as of this writing. Girls & Co is currently taking pre-orders on its Mackenzie doll, which should be available in June 2018.

Like American Girl, Girls & Co also sells clothing for both girls and dolls. The company has four, doll-sized dresses available, along with a "GRL PWR" t-shirt that should really be available for big people, too. (I'm just saying.) Meanwhile, girls up to size 5T can find clothing with dinosaurs, rockets, and mathematical equations written on them. Pretty snazzy, right?

The Brookies vs. the Bully centers on Mackenzie Hill, an African-American fifth grader who has thrown her hat in the ring to become the next Willowbrook Elementary President, but faces inexplicably stiff competition from Joey, the fifth grade's biggest bully. As a presidential candidate, Joey makes campaign promises he obviously can't keep, including one to "bring back ice cream" in the form of weekly field trips.

Sounds familiar, right? Donovan knows The Brookies vs. the Bully will resonate with parents around the U.S. She tells Bustle that she "felt compelled to write this specific story in the wake of last year's election."

"I felt completely shaken by what happened and disgusted by the campaign's unprecedented vitriol," she says. "As I reflected in the days and weeks following election day, I also felt an uncomfortable familiarity: many of us (particularly women) have seen this story unfold before. I know I'm not alone in having witnessed so many examples of qualified, talented, industrious women being spoken over, picked apart, and shifted to the sidelines in favor of a loud and forceful man — whether in politics, in the workplace, or in the classroom. [Girls & Co founder Neha Chauhan Woodward] and I both thought it was the right time to share Mackenzie's story and demonstrate how some of the issues that permeated last year's campaign and election are deeply ingrained in our society — and especially troubling for young girls."

"I know I'm not alone in having witnessed so many examples of qualified, talented, industrious women being spoken over, picked apart, and shifted to the sidelines in favor of a loud and forceful man..."

Donovan says she believes Joey's campaign employs more than just over-sized campaign promises, however. She tells Bustle that the candidate uses "micro-aggressions that really get under Mackenzie's skin and serve to slowly weaken her peers' perception of her," and says that she "thinks sexism is a sneaky part of Joey's campaign, too." Joey disrespects Mackenzie by "constantly interrupting her, belittling her inclusivity campaign as a 'sissy campaign' and implying that girls are not good at sports."

As Donovan says in our interview, "these types of comments and behaviors are incredibly prevalent in schools and workplaces and boardrooms across the country, and they can often be just as harmful as overt instances of sexism [because] each tiny instance is so hard to quantify and combat." In the U.S., nearly one-third of discrimination cases that the Equal Employment Opportunity Commission (EEOC) examines each year are related to sex and gender, including pregnancy discrimination.

Clearly, The Brookies vs. the Bully taps into a near-universal women's experience: gender-based harassment, discrimination, and violence. That may hit a little close to home for parents and kids who followed the election closely. Just this month, Facebook's Memories feature forced us all to relive the day when we woke up to learn that Donald Trump had won the electoral vote, leaving those of us who are not white, cisgender, heterosexual men with an uncertain future. Latching onto that uncertainty, The Brookies vs. the Bully ends just as voters are heading to the polls, with no clear outcome for Mackenzie's campaign.

"It was tough for women to witness a candidate who was so much more objectively qualified, articulate, and thoughtful on policy be verbally battered by her opponent — an admitted harasser of women — and to watch the country not just allow that, but embrace it," Donovan says. "In one fell swoop, the prospect of the first female president was removed and replaced by an administration that is often hostile toward women and women's issues."

"It was tough for women to witness a candidate who was so much more objectively qualified, articulate, and thoughtful on policy be verbally battered by her opponent..."

Of course, The Brookies vs. the Bully doesn't dredge up painful memories for nothing. Woodward "created Girls & Co not just to offer a new line of toys," in Donovan's words, "but to create characters that could serve as examples of and role models for the girls we know exist across the country: girls who are smart, ambitious, opinionated, caring, diverse, and kind." The goal, then, is not to show children how terrible life can be, but to inspire them toward greater things.

"We hope to use our characters to show young leaders that they can continue to work hard and be involved, and that they should never stop believing in themselves," Donovan says.

"In the book, the campaign takes a toll on Mackenzie, and she considers giving up," she says. "We hope that every child who is negatively affected by policies will be inspired by Mackenzie to keep trying and keep working hard, even if winning isn't guaranteed. If enough people try enough times, then things can slowly, surely change."

The Brookies vs. the Bully is out now from Girls & Co. The Mackenzie doll is currently available for pre-order, and orders are expected to deliver in June 2018.