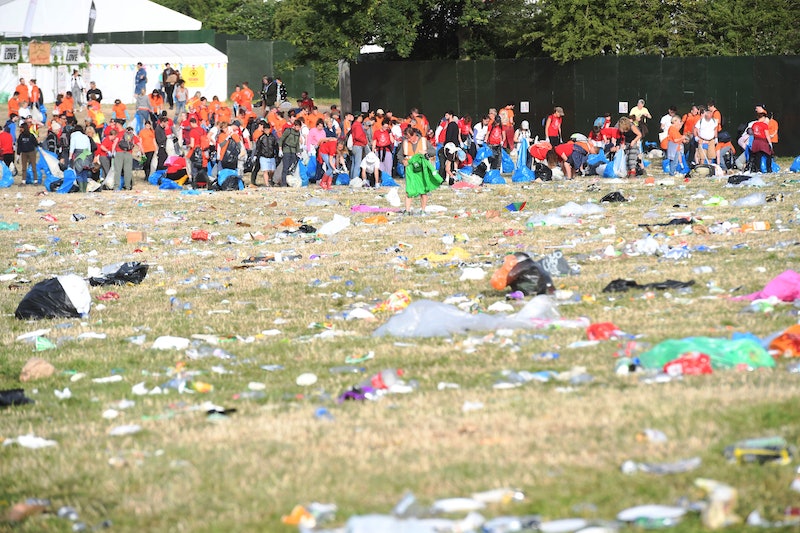 It feels like summer is finally upon us. The weather is getting warmer, the days getting longer, and festival season in full swing. Be it We Are FSTVL or Parklife, the nation has always loved to get together to see their favourite performers in action. But the aftermath of a festival can be pretty messy, with people feeling no obligation to take their tents or pick up the copious amounts of rubbish and plastic waste left behind. But, with one of the UK's biggest festivals about to kick off, Glastonbury's rules on single-use plastic look to be a big step in the right direction.

The levels of waste have been a problem at festivals for some time now. In 2018, the Independent reported that thousands of tents are abandoned at festivals every year, with 7,000 left at Leeds festival and 14,000 left at Reading last year. The director of Festival Waste Reclamation and Distribution Matt Wedge has noted that 90 percent of the tents left over sadly end up in landfill.

However, Emily Eavis, the co-organiser of Glastonbury Festival, is making sustainability one of the festival's top priorities for 2019, and rightly so. According to the BBC, Emily told Press Association:

"Sustainability and the need to live in harmony with the land, has always been vital to Glastonbury Festival. Our festival sits on farmland; it’s home to a rich natural habitat and it is our duty to look after that year round. If we can help our Festival-goers to be more aware of their lifestyles and inspire them to live their lives more sustainably, we might turn these small ripples of action into huge waves of change."

Glastonbury Festival has been running for 48 years, having been founded by Emily's father Michael Eavis in 1970, and over the past few years a number of measures have been put in place to ensure sustainability. In February 2019, the festival announced that single-use plastic drinks bottles would not be available to purchase this year. Instead, the festival is encouraging people to bring reusable bottles, which they will be able to fill up. As Emily explained alongside the statement: "It’s paramount for our planet that we all reduce our plastic consumption, and I’m thrilled that, together, we’ll be able to prevent over a million single-use plastic bottles from being used at this year’s Festival."

As well as plastic bottles, the BBC reports, "anyone going to the festival has been ... asked to leave non-essentials at home and non-compostable plates, cups, straws aren't allowed either."

But how else can festival goers keep their Glasto trip eco friendly?

Well, plastic ponchos, which have become synonymous with Glastonbury Festival and the copious amounts of rain, are also something to think twice about. As ethical lifestyle blogger Besma Whayeb explained to the BBC, she always favours a mac over a single-use plastic poncho. However, "[i]f you do take a plastic poncho," Besma says, "afterwards pack it up and keep it in your bag so if it rains throughout the rest of the festival you can shove it back on. You can also sit on them, which is useful, if it gets muddy."

Besma also added that festival goers should think about using eco-glitter that can "wash off" and "degrade away."

Then there's transport. The Telegraph have reported that there are so many ways to get to Glastonbury, so why not opt for a public transport option instead of driving? Driving can be pretty bad for the environment with CO2 emissions and so Besma would recommend getting a coach.

Lastly, washing. Showers can be impractical and hard to come by at festivals, meaning many people take wipes instead, but sadly these are not biodegradable, so Glastonbury recommend bring a reusable wash cloth and a bar of soap. Besma suggests simply forgetting about washing altogether. It's a festival after all.