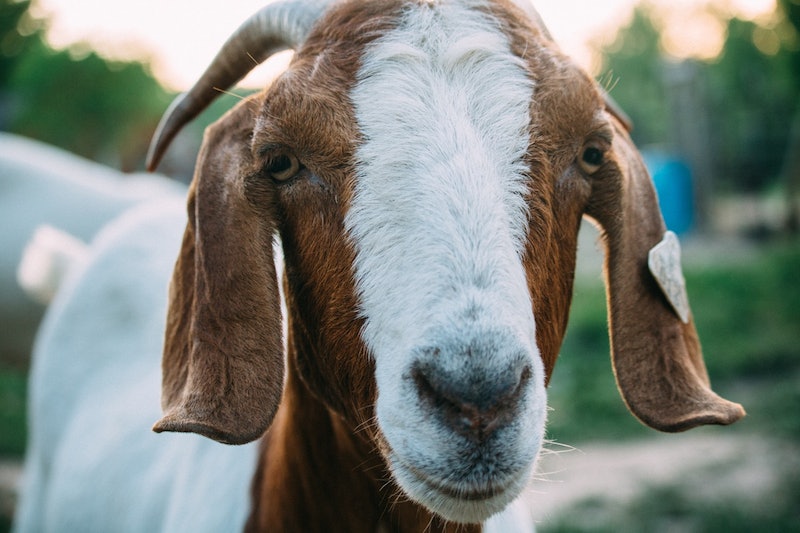 "Get your goat" has just taken on a whole new meaning. Instead of being slang for letting someone upset you, you can now get your goat and bring it to your yoga mat — literally: Goat Yoga is a thing now. Perhaps predictably, everyone loves it; even better, you don't even need your own goat to enjoy it. Goats have been lighting up social media for a while (if you don't follow the goat rescue Goats of Anarchy on Twitter and Instagram, you are really missing out), so it was only a matter of time before someone decided to bring these adorable cuties into our real lives.

With all of the recent iterations of yoga — rage yoga, beer yoga, weed yoga, etc. — it's clear yoga can be paired with almost anything to great effect. Enter goat yoga, a yoga class where baby goats walk on your back during parts of the practice. Peter Corriveau, owner of Jenness Farm, decided to offer goat yoga in his barn after hearing about the classes offered on the West Coast. "The response has been overwhelming,” Corriveau said in an interview with the New Hampshire Union Leader. “We stopped taking names for [goat yoga] waiting lists after they hit 350 people, so we’re trying to add in another instructor, add some more days of the week for classes and get a bigger space in the barn so we can accommodate as many people as we can.”

While the yogis are clearly gaga for goat yoga, from the video below, it looks like the goats are having a good time, too.

In Rock Hill, S.C., yogis came to Critter Creek Farm from as far away as West Virginia and Alabama to get their namaste on with some baby goats. And, in Albany, Ore., Lainey Morse's goat yoga class waiting list has more than 1,000 people on it.

"Goats are perfect for the yoga practice because it's not only combining nature and animals, it's combining yoga, and they all go together so well," Morse said in an interview with CNN.

For Morse, a seemingly offhanded remark from a friend at a child's birthday party planted the seed for goat yoga. Morse told CNN that a friend, and yoga instructor, commented that Morse's farm, No Regrets, would be a great place for a yoga class. Morse agreed, but joked that the goats, of course, would need to be invited too. Who knew the idea would go viral? Are baby goats what we've needed all along? Perhaps we're so traumatized by the recent political climate that what we really need is to let cute little animals walk all over us. It's such a simple concept, and Morse says it's actually making a positive difference in people's lives.

"It may sound silly, but goat yoga is really helping people," Morse told CNN. "People come in that have anxiety, depression; they're recovering from cancer or illness. ... It's not curing diseases, but it's helping people cope with whatever they're going through."

It seems like quite a few people are finding solace in caring for goats. Corporate Event Planner Leanne Lauricella left her New York City life behind when she moved to a New Jersey farm and sort of fell into rescuing, and caring for, disabled goats.

She now says it's her life's calling, and she started Goats of Anarchy, which went viral on Instagram, to help raise money, and awareness, for the plight of the baby goats. Currently, according to an article in USA Today, Lauricella has more than 40 goats, and next month is releasing a book, The Goats of Anarchy, about her experiences with the animals.

Morse followed a similar path, moving to her Oregon farm on a whim from Phoenix, Ariz., where she shares her space with eight goats, which had been a life-long dream of hers, according to CNN.

While some might dismiss goat yoga as a passing fad, Morse, who has an autoimmune disorder, can attest to the healing power of goats.

"I would come home every day and spend time with my goats, and it was so therapeutic for me," she told CNN. "It's hard to be sad and depressed when there's baby goats jumping on you."