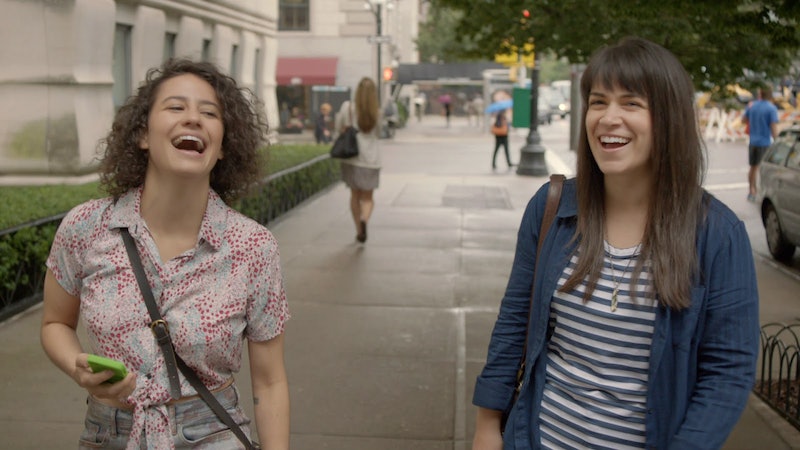 There's nothing like it being 4/20 to liven up a Monday. While the origins of this, our most scared of stoner holidays, is often disputed, what is clear is that this has been one helluva year for marijuana. Legalization is spreading more rapidly than wildfires in Humboldt County, and cultural acceptance of marijuana has reached a new high. But one of the most exciting ways we've seen some progress lately? In the acceptance of the reality that women, too, smoke weed.

From Broad City' s success to Rihanna's Instagram posts, plenty of women are coming out of the green closet and saying why they enjoy marijuana, unabashedly. As writer Cheri Sicard puts it in her new book, Mary Jane: The Complete Marijuana Handbook For Women , we are undergoing a revolution not just in how our culture views weed overall, but also how it views marijuana's popularity among women.

"Turn on the news [and] you are likely to encounter stories about Marijuana Moms, who say the herb makes them better parents, Stiletto Stoners, successful career women who prefer ganja to an after-work glass of wine or cocktail, or Grandma's Smoking Pot as a natural replacement for a host of pharmaceutical medications," Sicard writes. "While these stereotypes are little more than cliches, they tell us something important: The media are finally waking up to the fact that their longtime portrayal of the typical marijuana user as a male slacker who resembles Cheech and/or Chong is old school, outdated, and embarrassingly limited."

Amen, sister. I've already written about why I think marijuana is better than drinking, but on this 4/20, let's allow Sicard and her new guide illuminate nine reasons why weed and women go together like, well, Mary and Jane.

1. The Marijuana Plant Itself Is Female

Yes, there is technically a male marijuana plant, but it isn't the one bred to get you high — it's the female plant that produces the most potent buds. "Marijuana itself is matriarchal," Sicard explains. "After all, it's only the prized flowers from female marijuana plants that we smoke, vaporize, or turn into concentrates or edibles. And you can bet if you overhear a marijuana grower talking about "the girls," he's not talking about his daughters or even referring to his wife's breasts, but rather the crop of female plants."

2. It Helps With Cramps & Other Female-Specific Pains

It really works better than ibuprofen for PMS, in my experience. But marijuana has also been proven to help with other conditions that primarily affect women, like fibromyalgia, a chronic pain disorder. Amazingly, the bud might even help prevent osteoporosis.

"While the exact role the endocannabinoid system plays in regulating bone mass is not yet understood, preclinical research shows promise in reducing bone loss, stimulating bone formation, and slowing the progression of the disease."

3. The Oldest Woman In The World Swore By It

Lately, we've heard that the secret to living a long life is swearing off men. But before the reigning 'World's Oldest Woman' passed away in 2006 in India, she had a different tip: Fulla Nayak's self-proclaimed secret to her 125-year longevity? Her daily marijuana smoking. Yup.

4. It Helps You Stay Fit

Not that this should be a particularly female concern, but let's be real, it often is. "Science is just beginning to explore the reasons that, as a group, marijuana users have lower body mass indexes and lower rates of diabetes than the general U.S. population. Studies show this to be the case, despite marijuana's famous ability to stimulate appetite and cause the munchies," Sicard writes. Practically a health food.

5. It Can Make Orgasm Easier To Achieve

While this isn't true for everyone, for most of us, weed can have some very, ehm, stimulating results.

"Mary Jane's reputation as an aphrodisiac is deeply ingrained for good reason — it has some real physiological effects. In face, being high and being sexually aroused have a lot in common, as both affect the brain and hormonal systems," Sicard writes.

"Marijuana does dilate blood vessels and increase blood flow ... [which] can also heighten sensations for women, so you and your lover might find Mary Jane makes your lovemaking more sensuous and the pleasure of physical sex more intense. It can even make orgasm easier to achieve."

6. It Is Much, Much Safer Than Drinking

Besides the fact that you aren't going to blackout at a party from smoking weed (though you might fall asleep), the potentially fatal risks of alcohol are well-documented.

"An estimated 80,000 lives are lost annually due to either excessive drinking or accidental death by overdose in the United States alone. A February 2011 World Health Organization report says that alcohol consumption is responsible for four percent of all deaths worldwide," Sicard writes. "[By comparison], there has never been a single death credibly attributed to marijuana use, and it is in fact impossible to fatally overdose on marijuana."

7. It Was [Probably] Good Enough For Queen Victoria

"Sir John Russell Reynolds, Queen Victoria's personal physician for 37 years, wrot[e] of the many healing and therapeutic properties of cannabis. While we don't know for sure if the queen partook, it is quite likely her doctor, who regularly perscribed marijuana for a variety of reasons, did advise it," Sicard writes.

"A growing number of yoga studios, in legal and medicinally legal states, are openly embracing the cannabis-exercise connection by offering 420-friendly classes," Sicard writes. "When you think about it, the concept isn't so revolutionary. Considering marijuana's use in ancient cultures, it is very possible ancient yogis used ganja to enhance their practice. Physically, marijuana can help relax the body, helping practitioners go deeper into asanas, or yoga poses."

9. Creative Women Are All About It

The list of creative fans of weed is long, but everyone from Lady Gaga to Rihanna to Patti Smith have extolled the ways in which weed is a useful tool in their creative arsenal. As Alanis Morisette told High Times , "As an artist, there's a sweet jump-starting quality to [marijuana] for me. So if I ever need some clarity ... or a quantum leap in terms of writing something, that's a quick way for me to get it."