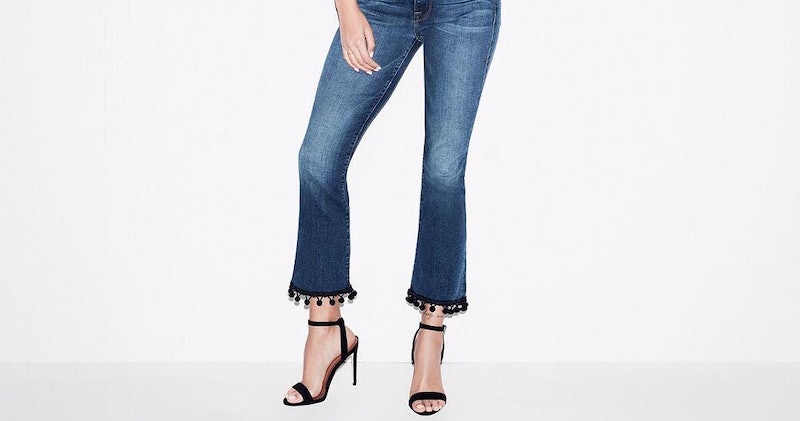 No matter what the season, one style is always a staple: denim. From shorts to skirts to jeans, denim works no matter the weather. Now, you can add to your denim collection thanks to Khloe Kardashian's Good American's new styles because there's never such a thing as too much denim or too much Khloe Kardashian. These latest styles, though, while perfect for every season, are so summer time perfect that you'll want to shop them immediately, and the good news is that you can.

While fans of Good American have become accustomed to biweekly style launches, the releases are new and fresh each time they're dropped. From classic, side zip denim to sexy, fitted denim pencil skirt, the styles have been incredibly diverse, and that's not stopping now. The latest drops from Good American feature pom pom details that basically scream summer fun.

The Good American pom pom details aren't just on jeans, either. The launch feature three distinct styles, but they're all united by their hemline details. The Good Legs Crop Pom Pom, the Pom Pom Mini, and the Pom Pom Good Boot Crop are all available for purchase right now over at the Good American website, and once you peep them, you'll need them in your wardrobe.

As for the pricing, if you're already a fan of Good American, they won't come as a surprise. For the pom pom denim launches, prices range between $145-$169.

If you want to shop them, they're all available over at the Good American website as of press time. The good news is that there's a pom pom style no matter what your favorite kind of denim.

If you've been searching for perfect, fun summer denim, the new Good American pom pom styles will be your must-haves. With flare, style, and and fun, fans won't be able to get enough of them.