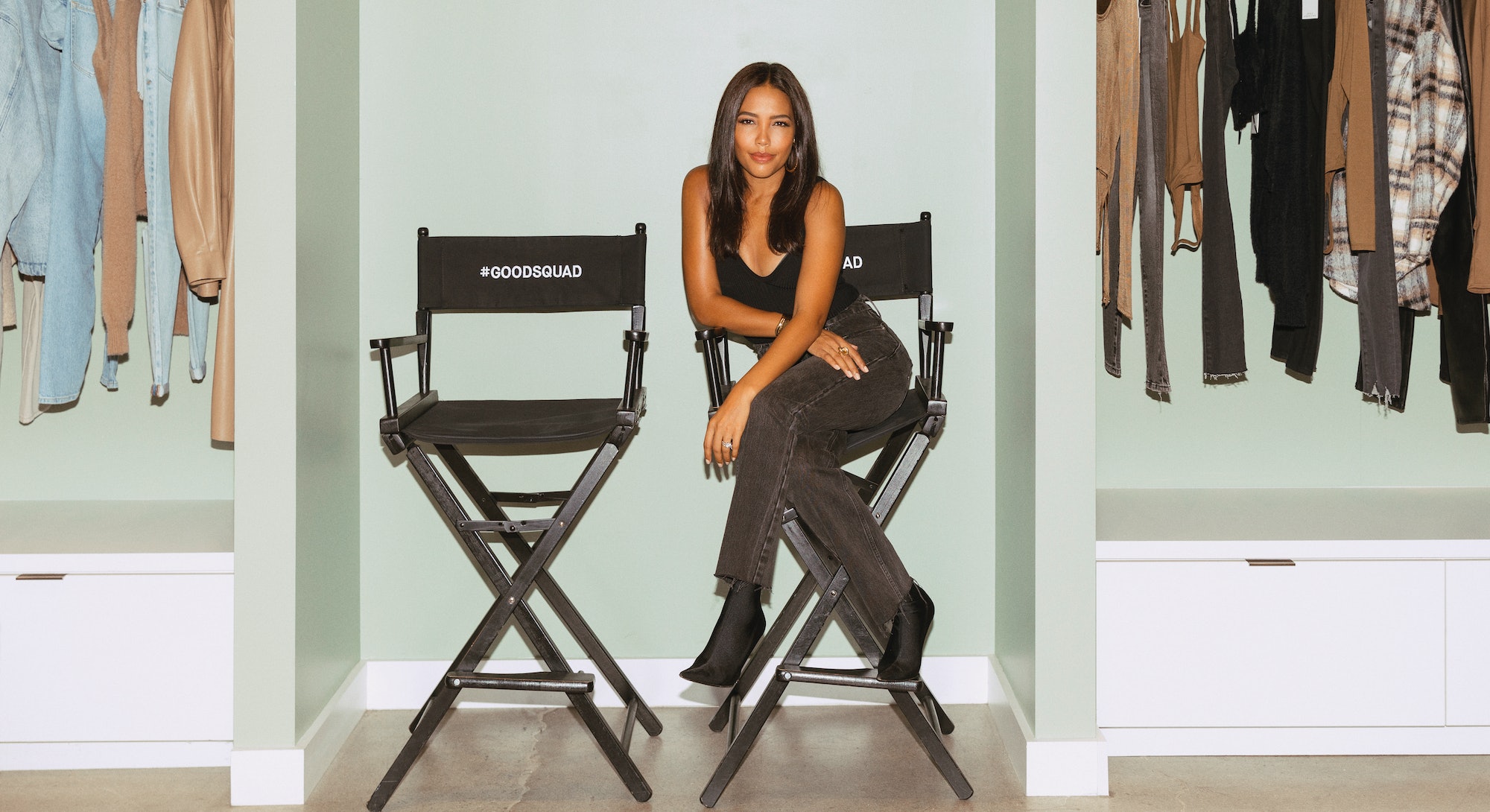 Before I even turn the corner to enter the headquarters of Good American, I can hear Emma Grede’s laughter. It’s a busy morning at the inclusive fashion label’s Culver City office. The brand just dropped the latest iteration of their “Better Than Leather” collection of faux-leather leggings, crop tops, and trousers, while Grede just wrapped her photo shoot for this story. As dozens of employees stand by to ensure her schedule continues to run smoothly, the 39-year-old co-founder is relaxed and welcoming. Imagine a Black, British Elle Woods, but instead of a pink suit and a Harvard law degree, she’s a successful entrepreneur in a pair of Good American jeans and gold hoop earrings.

“I've loved fashion since I was so, so young,” says Grede from a seat on an enormous gray couch. Today she pairs her black, light-wash Good American jeans with black Balenciaga boots, Jennifer Fisher gold hoop earrings, and her signature Elsa Peretti Tiffany cuff, which was a gift from her two children with husband Jens Grede, co-founder of the denim brand Frame.

It’s easy to see why people gravitate toward Grede, including one of the world’s most famous families. Since 2016, she has launched not one, not two, but three different ventures with the Kardashian-Jenners: as co-founder and CEO of Good American with Khloé Kardashian, as a founding partner of Skims with Kim Kardashian, and as a founder of Safely, the “plant-powered” cleaning products company she started with Kris Jenner in March.

Good American celebrates its five year anniversary this month with a success story most brands could only dream of. When it launched in October 2016, it famously racked up $1 million in sales on its first day, reportedly the biggest denim launch in apparel history. In 2020, when other retailers experienced layoffs and poor sales, the brand saw 78% revenue growth. In June, Grede predicted they’ll reach $155 million in sales by year’s end, up 85% from 2020.

So how did Grede get into business with one of the most powerful families in Hollywood?

“I was drawn to that world and those people, [but] it was more a means of escapism,” says Grede, who grew up in a working-class neighborhood in East London. “That glamour was very far from how I was being raised.” As the oldest of four sisters raised by a single mom, she collected issues of fashion glossies like Vogue and ELLE, and idolized models like Naomi Campbell and Kate Moss.

By age 13, she was working a local paper round, and then standing behind a deli counter, slicing meat and making sandwiches. She enrolled at the London College of Fashion at 16 to study business, but dropped out with just two semesters left. “I would have benefited from finishing college, but that wasn't my path,” says Grede, who was 18 at the time. “It just wasn't right for me at the time.” She believes her dyslexia, which she was diagnosed with a few years later, hampered her studies. Instead, she “went straight to work,” first at the concierge company Quintessentially, then at Inca Productions where she produced fashion shows and events.

“I had an incredible role model in my mother who went out to work every day,” says Grede, whose mom was a banker at Morgan Stanley for 18 years. “So that really cemented the idea of work, and what it means to go out and forge a living and create something for yourself. I was very aware of that from very young.”

Before she turned 26, Grede had already founded ITB Worldwide, a talent and influencer agency with offices in London, New York, and Los Angeles. In 2009, she brokered a partnership between Natalie Portman and Dior that put her company on the map, and in 2018 it was acquired by Rogers & Cowan for an undisclosed sum. Grede stepped down to focus on Good American as part of the deal.

It was during her time at ITB Worldwide that she met her husband, Jens. Besides Frame, he is co-founder of The Wednesday Agency — his business partner, Erik Torstensson, is the long-term boyfriend of another fashion mogul, Net-a-Porter founder Natalie Massenet — while also serving as Kim’s business partner in Skims and its board director. “It's funny, because we had a business relationship before we had a personal relationship, and we're actually not that good at collaborating,” she says. “He does what he does, and I do what I do, and we're very respectful of one another's respective areas of expertise, but we don't cross over that much.”

The couple relocated from London to Los Angeles in 2017, and have two young children, a son named Grey, 7, and a daughter named Lola, 5. “We co-parent and we have a house and a life, but we both have the mindset that work is our life,” she says. “We both really love what we do. As you know, my businesses have taken off, and he [wants] me to fulfill my ambition, and that's important in a partnership.”

It was through Grede’s work at ITB that she started working with Kris Jenner on various partnerships (Kendall Jenner’s 2015 #MyCalvins campaign, for one, which ITB booked 60 influencers for). The two would regularly meet in Paris during fashion week, and when Grede pitched the idea of Good American to Kris with Khloé in mind as the potential partner, Kris encouraged her to speak to her daughter directly. The two bonded immediately.

“We built Good American to meet a dire need for a fashion brand that’s inclusive in every way and empowers all women,” wrote Khloé in an email to Bustle. She was “drawn to [Grede’s] understanding of what it means to be a woman today and the unfortunate reality that so many women find it difficult when it comes to clothing and sizing.”

Good American has been inclusive from the jump, offering denim in a size range of 00-24, and photographed on a diverse group of models — something that’s still a rarity in the fashion industry. “I never set out to create a company that was rooted in principles of diversity,” says Grede. “That's just what happens when a Black woman is at the helm of a company. Decisions are made with this viewpoint that I grew up [with]. The women in my family are super curvy, and I don't want to count a whole bunch of people out because fashion can't be bothered or can't figure it out.” Grede stood her ground with buyers from the beginning, refusing to let them cherry-pick from the line, which is sold at select Nordstrom, Bloomingdale's, and Neiman Marcus stores. Retailers were pushed to buy every style in every size, and sell them together instead of separating them into a plus-size designated area.

In 2018 the brand added activewear to their collection; outerwear, dresses, swimwear, and shoes soon followed. According to Khloé, she and Grede “always get so nervous” before any big launch. The pair meet with their merchandising team every month to plan upcoming launches, with Kardashian’s responsibilities including working with the marketing team to plan campaigns and social media rollouts. Grede, meanwhile, is involved in almost every aspect of the business, overseeing everything from design to e-commerce. On the weekends, she’ll read customers’ product reviews to get ideas for product innovations like their trailblazing size 15 jean, for people who fall between straight and plus-sized. Khloe calls Grede “one of the hardest working people” she knows: “She embraces every component of the business, and consistently pushes the envelope for what a modern and inclusive fashion brand can be.”

Grede returns the sentiment. “My experience of working first with Khloé, and now with Kim and Kris, is that they’re successful because they work really hard. They’re really great businesswomen,” Grede says. “No one has the type of staying power they've had unless you’re really good at something. … What they have in common is that they are coming to work. They ain’t playing,” she says, laughing.

With Good American, Skims, and Safely, Grede already has a full-looking plate, but in actuality, she has a full-on business buffet. She’s Chairwoman of the Fifteen Percent Pledge, an organization that seeks to get retailers to guarantee a percentage of their shelf space for Black-owned businesses. She’s also on the board of Women for Women International, Baby2Baby, and TheRealReal, and this month she will join Shark Tank as a guest judge for its 13th season.

So how does she juggle work and her home life, and also find time to unwind, read (her favorite hobby), and listen to ’90s jams, preferably Whitney Houston and Mariah Carey?

Grede shares a lot of habits with other CEOs: She’s an early riser (“I believe in that whole 5 a.m. club”); prefers a daily uniform like Steve Jobs (“I don't have time to put a look together every day, so it’s a white shirt, a blue jean, or a black T-shirt and a black jean”); and tries to keep her decision-making to a minimum. “I don't like to choose what I eat. I don't like to choose what I wear. My whole day is about making decisions, and so I try to think like Barack Obama. You remove all the small decisions from your life,” she says. “Otherwise, being a Libra, I can procrastinate about lunch and 20 minutes later, be like, ‘Do you want some lunch?’”

Still, as successful as Grede is, she wants people to understand that it comes with sacrifice. “We were sold a bill that was bullsh*t,” she says. “For women specifically, we’ve come up with this idea that you've got to be a boss, and you've [also] got to meditate, and wait to have babies, and be our best selves at work.” But not Grede. “I don't believe in ‘having it all.’ And setting ourselves up for this idea, [that this] is what we should be striving toward, sets us up for a big fat fall.”