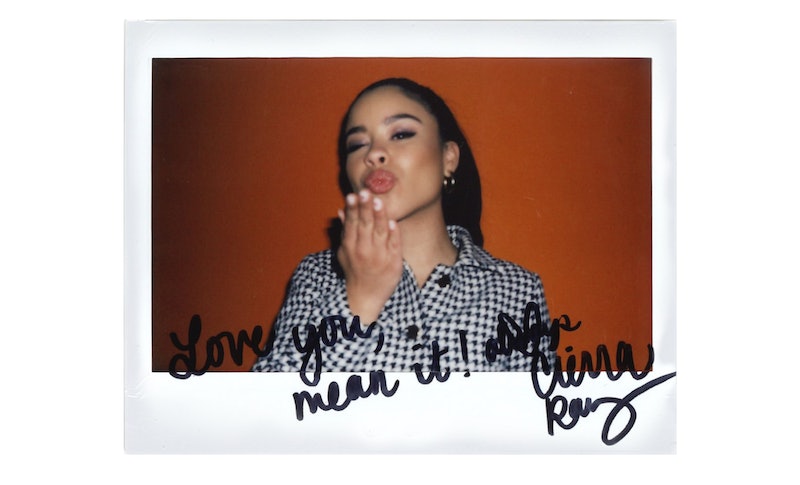 When celebrities hang out with Bustle editors, we want to give them the chance to leave their mark. Literally. So we hand them a pen, a piece of paper, a few questions, and ask them to get creative. The rest is up to them. This time, Good Trouble star Cierra Ramirez is leaving her mark in the Bustle Booth.

It's rare that a show about twenty-something women working and living in a city like Los Angeles ever feels all that realistic or relatable, yet Freeform's The Fosters spinoff Good Trouble is managing to pull it off. That's in large part due to Cierra Ramirez's performance as Mariana, an outgoing and ambitious college grad who decides to move across the country with her sister, Callie (Maia Mitchell) to jumpstart her career. And her "grown up" life, though that doesn't prove to be very easy.

Sure, most college grads don't move into a ridiculously large loft with a roof pool, impossibly good looking roommates, and end up with their dream job, but Mariana's experience feels believable and important for how common it is in other ways. Her first big gig at a tech company turns out to be a sexist cesspool of an office and she can't do anything about it; she's charging bodycon dresses and cocktails to a credit card she won't be able to afford for much longer, and her love life these days is largely non-existent save for a random hookup that doesn't end in true love, but does give her little shot of self-esteem.

The series, which has already been renewed for a second season, doesn't chide her for her choices or demand she fix herself in order to learn some valuable life lesson about self-confidence or fiscal responsibility. Ramirez acknowledges that the character has come a long way from the teen she played on The Fosters.

"It’s weird for me as a fan to see her this way, since I’m so used to her having high school drama, and walking around the hallways with her little backpack. But now she’s taking on the real world," Ramirez says.

As much as Mariana seems to be taking on, Ramirez is thoughtful when she considers some of her struggles this season. The actress and musician (Ramirez has a new album coming out next month) seems to worry about Mariana like an older sister, joking that she wants her to just "slow down." Ramirez adds, "I really admire how she doesn’t keep her head down and makes herself known. I think she wants it all right now, to sell her own app and be at the top of the company , but she’s gotta work for it. She has to slow down, enjoy the moment, and just be very present."

While Mariana might not be slowing down anytime soon, Ramirez did take a minute to dish about her favorite cartoon growing up and her first major TV crush, to which we can only say: same, girl, same.

More like this
On 'Industry,' Marisa Abela Takes Control
By Morgan Leigh Davies
Tacos Are Chef Kay Kay’s True Love Language
By Maxine Harrison
Thank Scout Willis’ Parents For Her Love Of Music
By Ivana Rihter
Everything To Know About Netflix’s 'Never Have I Ever' Season 4
By Jack Irvin and Gabrielle Bondi
Get Even More From Bustle — Sign Up For The Newsletter