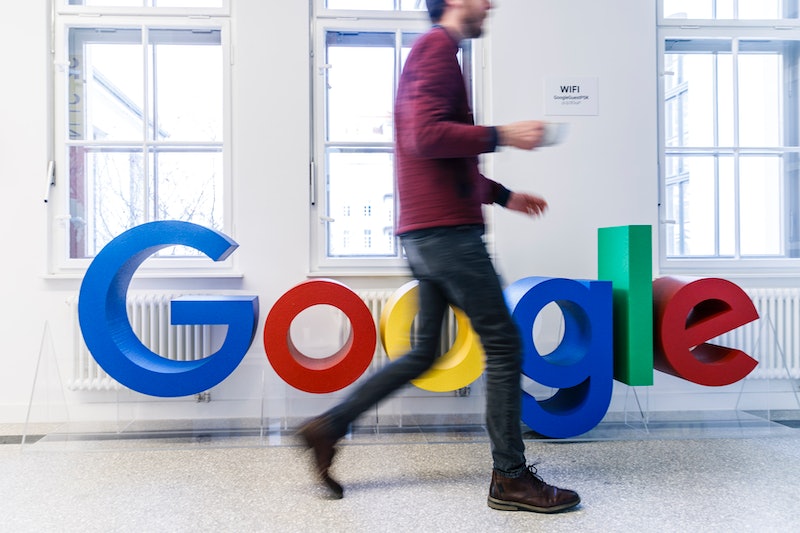 Google employees' salaries have frequently been in the news over the past couple of years, as allegations that the company systematically pays male employees more than women arose. In 2018, Google spent millions to close its gender pay gap — but most of that money went to men, according to The New York Times.

Every year, Google carries out what the company calls a "pay equity analysis" with the aim of evening out salaries for employees who hold similar positions. The company announced in a blog post on Monday that last year's analysis took 91 percent of the company's employees into account, and Google ended up granting an additional $9.7 million to 10,677 employees. According to The New York Times, Google's employees are 69 percent male, but more than 69 percent of the salary adjustments went to male employees.

Google's lead analyst for pay equity and people analytics, Lauren Barbato, gave one explanation for why so many men got a raise.

"The 2018 analysis flagged one particularly large job code (Level 4 Software Engineer) for adjustments," Barbato wrote in the blog post. "Within this job code, men were flagged for adjustments because they received less discretionary funds than women."

As Barbato acknowledged, Google's pay equity analyses don't provide a complete picture of the company's wage gap. As The New York Times noted, the analysis didn't take into account whether women had been hired at a lower pay grade — a pattern that is one of the main foci of a lawsuit filed against Google in 2017, in which three women alleged that Google systematically paid men more than women (which Google denied).

One of these women was Kelly Ellis, who was hired at as a "Level 3 employee" — a term used for people hired directly out of college — even though she had four years of work experience. Weeks later, the lawsuit claimed that a male engineer who had the same amount of experience as Ellie was hired as a "Level 4" employee, which not only gave him a higher salary, but also better access to potential bonuses, raises, and compensation in the form of stocks. The suit also alleged that this happened with more than one man hired to Ellis' team.

The instances described in the lawsuit were allegedly far from isolated, and even the Department of Labor picked up on it. In 2017, the Department of Labor claimed that there were “systemic compensation disparities against women pretty much across the entire workforce" at Google — a claim that, according to The Verge, Google strongly denied.

When it comes to these salary adjustments, critics say that Google is addressing surface level issues rather than the structural inequalities that women face within the company and elsewhere in the tech world.

“It is very disappointing that, instead of addressing the real gender pay inequities adverse to women, Google has decided to increase the compensation of 8,000 male software engineers,” wrote Jim Finberg, a lawyer on the pay equality case, in an email to WIRED. “Come on, Google! It is time to do the right thing.”