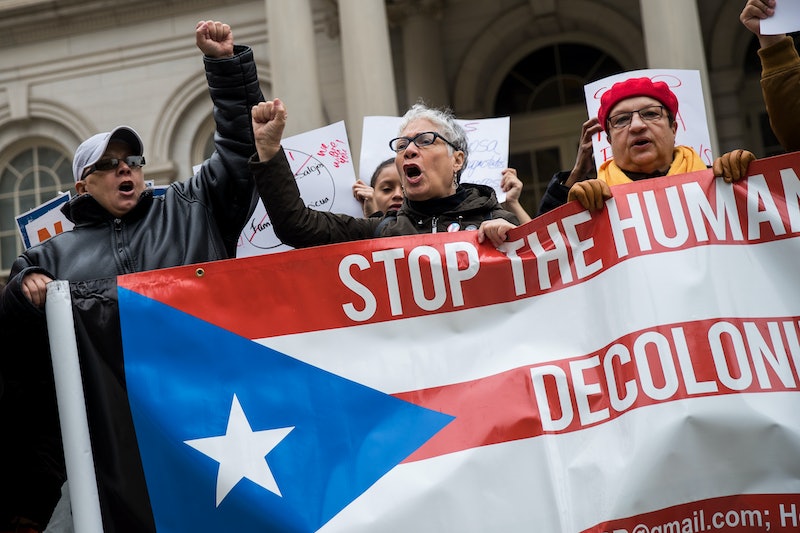 The crisis in Puerto Rico is far from over, and another hurricane season is on its way. After Hurricane Maria swept through Puerto Rico in September of last year, killing an estimated 4,600 people, according to a new study from the Harvard T.H. Chan School Of Public Health, leaving hundreds of thousands more without water, food, and shelter, and drastically weakening its physical and economic infrastructure, Puerto Rico continues to struggle to recover. Google.org, the tech company's charitable arm, announced today that it will fortify that recovery effort by matching up to $2 million in donations to support small business recovery and resilience efforts in Puerto Rico, and by launching a tool to make it super simple to donate. The initiative is in partnership with the Hispanic Federation and Mercy Corps, which have both been instrumental in organizing donations over the last eight months since the hurricane.

Money raised through Google.org's matching campaign will go toward helping to support "the most impacted and most important industries on the island, such as agriculture, fisheries and tourism," a Google representative tells Bustle. "Immediately after the storm, two thirds of small businesses closed, and more than 10,000 (or 20 percent of the total) [small businesses] have not reopened nine months later."

According to a Hispanic Federation representative, the most urgent needs in Puerto Rico right now involve "economic stimulation, infrastructure support rooted in renewable energy sources, and the rebuilding of housing. We also need a much stronger federal response to the crisis," the representative added.

The Trump administration has faced criticism over its handling of the crisis after pulling out American troops who were providing aid to Puerto Rico just seven weeks after Hurricane Maria. At the time troops left, one in 10 households had no safe drinking water and more than half of homes and businesses were still without power, CNN reported. And though the Federal Emergency Management Agency (FEMA) did cut off supply runs to Puerto Rico, it said in January 2018 that it was going to continue handing out supplies it had stockpiled, according to CNN.

But some worried the supplies FEMA was offering, like other relief efforts set up by the U.S., just wouldn't be enough. San Juan mayor Carmen Yulín Cruz, who has been critical of the Trump administration's response, responded recently to Donald Trump's lack of comment about the newly estimated death toll of 4,600, which is "as much as 70 times higher than the government’s official estimate illustrates that fact," according to The Independent.

"The fact is that the Trump administration’s bureaucracy and neglect created a climate of inefficiency that cost lives," Cruz told Yahoo! News. "Their inability to meet our needs and their lack of empathy continues to be responsible for the slow pace of our recovery. If they think they did everything they could, they are admitting they did not do enough. They cannot acknowledge the hundreds and thousands dead because those lost souls are irrefutable proof of their inadequate response."

In order to help Puerto Ricans who are in need of a boots-on-the-ground response, about 30 Google employees and affiliates have been in Puerto Rico assisting with rebuilding efforts in coordination with "local education, small business and community organizations," a Google representative tells Bustle. One of those volunteers, Alfredo Garcia, tells Bustle that during Hurricane Maria, he was part of an effort to "drive communications to keep people in touch and provide information on missing people through tools such as Person Finder."

This effort was particularly important to Garcia, who tells Bustle that for 10 days after Hurricane Maria struck Puerto Rico, he was unable to reach family members who lived there. "We are used to 24-hour connectivity, being able to reach people immediately," the Google executive says. "And here we were, U.S. citizens, unable for almost two weeks to reach out families. It was nerve-wracking and hard to believe."

He says folks who have trouble understanding the scale of what's still happening in Puerto Rico should picture themselves in the same situation. "I would ask them to imagine [more than] 4,000 people in the United States dying from a natural disaster," he explains. "Try to imagine their hometown — their family — without power, running water or basic cell service for months. No one who imagines this can feel it is anything other than a crisis demanding action."

Another volunteer, Michael Munoz, who is a diversity business partner of Google, tells Bustle that people heading to Puerto Rico this summer for vacation shouldn't mistake the island being open to tourists for the island being recovered. "There is still a lot of work to be done. 3.3 million people are still in Puerto Rico and many are struggling. It's our responsibility to support them in any way we can."

To donate to Google's campaign, all you need to do is visit the site and click the donate button. And for other ways to support Puerto Rico, check out Latino Rebels' incredible list of organizations dedicated to helping the island and the millions of people who live there.