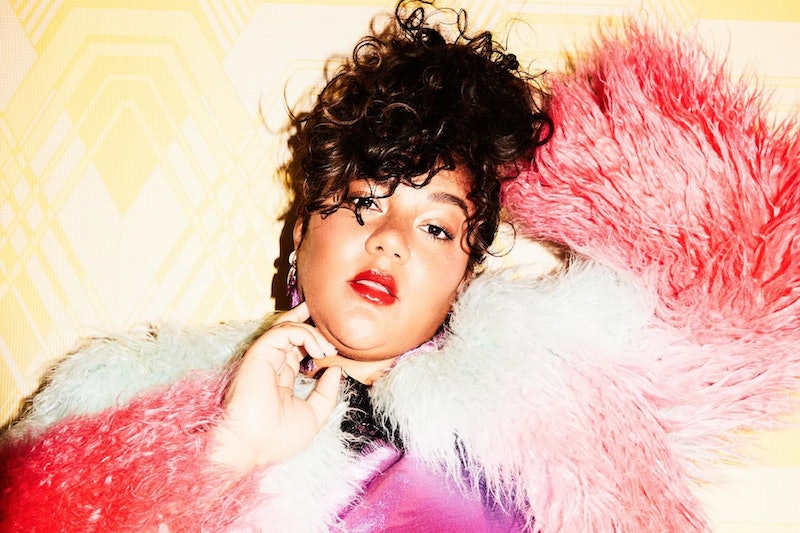 Social media is, fairly or unfairly, most often discussed in relation to its flaws. The unrealistic body standards it sets, the trolls that attempt to silence marginalised voices, the pressure to be constantly on, and the impact all of these can have on our mental health. But there are some corners of the internet that radiate positivity and Grace Victory's social media presence is one of them. To call the 28-year-old a blogger or influencer would be to do her a disservice; she is those things, yes, but she's also a speaker, a podcast presenter, a Youtuber, a model, an activist and campaigner, and most recently a campaign star for Vauxhall's Corsa. Phew.

The company has reinvented its 1993 advert, which featured supermodels Naomi Campbell and Kate Moss, with stars of the social media era. Featuring in the new Corsa Twenty Five campaign alongside Victory, are Anaïs Gallagher, who is passionate about animal rights, Harnaam Kaur, whose mantra is "my body, my rules," and Kylie Griffiths, founder of London Girls Surf Club.

For a blogger and Instagrammer like Victory to appear in the ad campaign for a brand as familiar as Vauxhall speaks to the power of influencer marketing, yes, but also to the strength of the positive message she embodies. And for Victory the partnership with Vauxhall is personal, she tells me her first car was "a blue Corsa" and emphatically agrees when I ask if she found being able to drive as a young woman empowering.

It’s heartening that big brands like Vauxhall are getting behind women who aren't afraid of speaking their minds in ways that people might find uncomfortable. Earlier this year Victory lost 150 followers after sharing an image on Instagram that featured period blood.

She tells me that the post was an effort to remove the shame that still exists around menstruation which she believes directly contributes to problems like period poverty.

"Shame is one of the most difficult emotions to feel [...] and it can eat you up inside and I don’t want young girls and women to feel that kind of shame that I’ve previously felt. And period poverty as well. We’re so quiet about periods that we’ve sort of turned a blind eye to some girls not being able to go to school because they can’t afford products to use like pads and tampons and stuff.

"I just think bleeding is one of the most natural things in the world, it’s the reason that we’re here, that we exist. Why are we constantly shamed for it? It makes women feel dirty or embarrassed and it’s just unnecessary."

It's not the only issue Victory speaks out about on social media, she has also used her platform to advocate for greater diversity in advertising and the media, respect for marginalised voices, and much more.

She says: "We live in a man’s world and we’ve internalised misogyny and we’ve been silenced for so long around everything, around sex, around our bodies, around so much stuff. And it’s about rising up now and [saying] 'no this doesn’t feel right' and it just doesn’t feel right to me to not use my platform for certain topics."

It's this creative freedom and power to push for change that Victory appreciates the most about social media. "It’s a place for people to be heard, to be included. Women have been silenced for so long and now we’re finding our voices again and I think social media has played a massive part in that."

She continues: "There are 18-year-old activists who are campaigning to end period poverty. You would never have that if you didn’t have the internet. It’s a way for young women and [other] marginalised voices to be heard. Change does come from crowdfunding and campaigns online. It’s the easiest way to get out what you want to be heard."

But with a platform to share your thoughts comes pressure, and Victory knows just how difficult a place social media can be. As she explains, "I think it was difficult in the beginning, I think I had a really unhealthy attachment to the internet. I really based my self worth on what jobs I was getting, and just my career in general. And always feeling like I needed to defend myself and I needed to speak up on every topic."

But through experience comes wisdom and Victory has plenty of practical advice for those looking to make their Instagram and Twitter feeds a more pleasant place to be.

"I’ve tried to work on authenticity and talking about things I have a massive passion for and that I think need to be spoken about. Balancing that with [knowing] I also have to live my life. I’m not going to change every issue in the world. That’s just not going to happen. Life is about balance and finding out what works for you. So for me I just don’t enjoy continuously scrolling for hours on end."

Instead she advises: "[Try] diversifying your social media feed. If you’re following people who make you feel bad about yourself, unfollow them. You’re not obliged to follow. Living your truth is about living life, and you can’t live life if you’re always on your phone."

And it's not just social media, but self-care more generally. For Victory the lessons you can learn in carving out a healthy online presence carry over into real life.

"I think we all need work on really healthy boundaries. And pleasing ourselves. If you try and please everyone you’re going to lead a very unfulfilled life. And trying not to care what other people think of you, which I think comes with age and wisdom. Learning to let go of everything that doesn’t serve you is an amazing thing to do in terms of self care. We all just need to be kinder, and recognise that everyone is just trying their best."

Victory clearly has wisdom to spare and as we head into 2019 after a turbulent (to say the least) 2018, she has thoughts on what could make it the best year yet.

She wants to see “more authenticity across the board. And not just in terms of representation in campaigns and with brands, but women living their truth more. Because I think that’s the way you feel free. I think lots of people think they’re chasing happiness but deep down they’re really chasing freedom."

So if you're still stuck on your New Year's resolutions for 2019, why not make just one? To live more freely, Grace Victory style.

To find out more about the Vauxhall Twenty Five Campaign visit www.vauxhall.co.uk/corsatwentyfive, or check out #corsatwentyfive on social media.