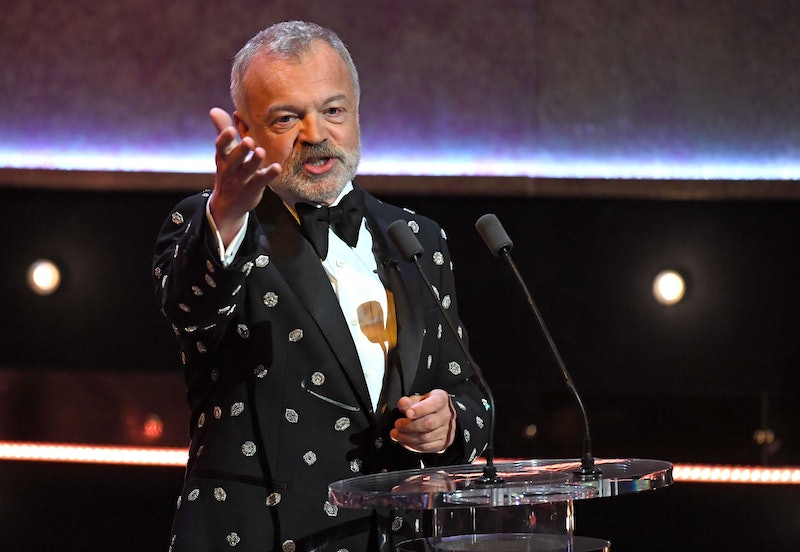 As the 2019-2020 award season fast approaches, the question on everyone's lips is who's going to be in charge of hosting all of the various star-studded ceremonies. From Lenny Henry to Stephen Fry to Joanna Lumley, the BAFTAs have always known how to pick a host to keep us entertained through the night, and no more so than when chat show host extraordinaire Graham Norton takes the helm. So news that Graham Norton will play BAFTA host again in 2020 will be music to many people's ears.

The announcement comes ahead of the 73rd internationally renowned event, which will be returning to London's world famous Royal Albert Hall on Feb. 10 2019.

Norton and his shows have been nominated for a total of 19 BAFTAs over the years, and he has spoken of his happiness about being given the privilege to host the ceremony once again. In a statement sent to Bustle UK, Norton said:

"I'm delighted to be taking the helm of the biggest night in British Film, the audience at the Royal Albert Hall will be the biggest sofa I've ever faced. I'm honoured to be following in the fabulous footsteps of Stephen Fry and Joanna Lumley."

Norton, who's a well-loved TV personality, as well as respected author, comedian, and actor, is best known for his prowess hosting The Graham Norton Show, which is now in its 26th season. It's a show in that has a great number of BAFTA winners have appeared on, including Olivia Colman, Daniel Kaluuya, and Dev Patel, among many, many others.

The 2020 BAFTAs is exciting for a whole new reason, as it's the first year since 1999 that a new award has been introduced. The new Casting Award, which was announced via BAFTA's Twitter page earlier this year, will be a celebration of the film industry's casting community.

Many people in the industry have expressed their excitement about the new award, including Richard E Grant who tweeted that casting is one of the most important roles in film and TV because not only does it dictate the production, but the careers of those involved.

The Guardian reports that the nominations for BAFTA 2020 will be announced on Jan. 7, 2020, so keep your eyes peeled.