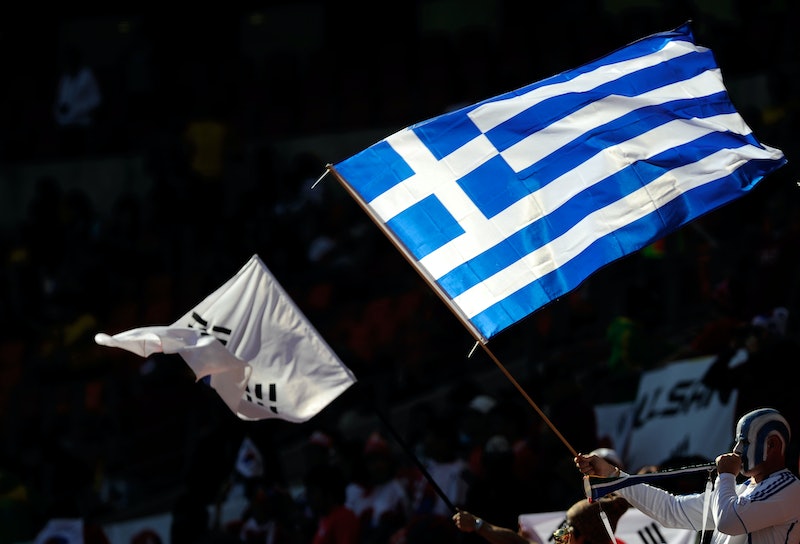 The Greek government is reassessing how it defines rape, Bloomberg reports, and the country's women are reacting. Although the changes haven't been enacted yet, if they are, Greece's definition of rape may not focus on consent, and people are taking to the streets to protest, the news outlet reports.

The changes, if passed, could potentially ease punishments for those convicted of rape, Bloomberg reports. In a report on the issue, Amnesty International said that it is concerned that the current and proposed legal definitions of rape in the Greek penal code "are focused on resistance and violence rather than lack of freely given consent... as required by international law and standards."

The current legal definition of rape in Greece reads: "Whoever with corporal violence or with threat of great and imminent danger coerces another to intercourse or to tolerance or action of another indecent act, is punished with incarceration."

The proposed change, in contrast, reads: "Whoever with corporal violence or threat of great and imminent danger to a person’s life or bodily integrity coerces another to attempt or tolerate a sex act is punished with incarceration."

A proposed addition to the country's legal definition of rape would also define a "sex act" as "intercourse and acts of equal gravity to this."

In its report, Amnesty International said that it believes the proposed change is "a significant step backwards as it reinforces the notion that physical violence or threats of violence should be kept paramount in the legal definition." The group argued that rape which occurs as a product of blackmailing or other non-violent threats may well go unprosecuted.

The bill will be voted on come Thursday, per Bloomberg.

Amnesty International has been working to improve the way that European countries legislate rape offenses, The National Herald reports. The campaign began in 2017, per the Herald, and it encourages countries to define rape as a consent-based crime.

Irene Gaitanou, of Amnesty International Greece (AIG) said in March that the proposed changes for the country's legal definition of rape were "a step back for women’s rights," per the Herald.

She argued that "the outstanding rates of lack of punitive measures for rape, the very low rate of reported rapes, and the struggles of surviving victims demand a legislative change, which will lead to a wider social conversation in order to change personal and social attitudes.”

There weren't many details available on Wednesday regarding protests against the proposed legal changes. Bloomberg reports that the new definition could potentially allow certain rape cases to be punished at a less-severe level because those incidents may not fall neatly under its parameters.

The Greek government is currently in flux as it prepares for national elections at the beginning of July, Bloomberg notes. It's not clear how a change like this could be impacted under such circumstances, although some have reportedly argued that the country should wait until those elections are over before deciding to alter its penal code. In the meantime, the suggested alterations remain up for debate.