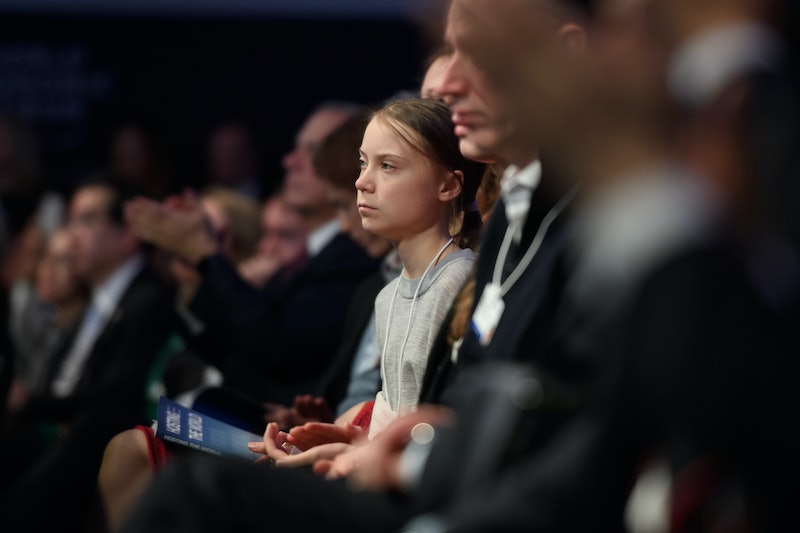 Two people that probably couldn’t be more different, the president of the United States Donald Trump and youth climate activist Greta Thunberg, both found themselves at the same event today (Jan. 21) with the first day of the World Economic Forum 2020 bringing world leaders together in Davos. And, to absolutely no one's surprise, the two figures had some very clashing opinions of the topic of the day: climate change.

When Trump took to the stage at Davos today, all eyes turned to Thunberg, whose less-than-impressed facial expression spoke a thousands words. During his speech, Trump promised that the United States would be signing up for One Trillion Trees replanting initiative, yet he also seemed to take a dig at the seriousness of climate action and the activists drawing attention to it. Speaking in front of the audience at Davos, the president said, “We must reject the perennial prophets of doom. This is not a time for pessimism. This is a time for optimism.”

Unsurprisingly, Thunberg's subsequent speech had a very different tone. The Swedish teenager highlighted a few key issues that she believes need to be addressed urgently. “Companies, banks, institutions, and governments should halt all investment in fossil fuel investment and extraction, immediately end all fossil fuel subsidies, and immediately exit from fossil fuels,” she said.

Thunberg also spoke about how no world leaders were doing enough yet to save our planet. "No political ideology or economic structure has managed to tackle the climate and environmental emergency and create a cohesive and sustainable world," she said. "Because that world, in case you hadn’t noticed, is currently on fire."

And in Thunberg's speech, she made Trump’s optimistic view seem misguided, appearing to directly comment on his pledge to plant trees. "Planting trees is good, of course, but it’s nowhere near enough, and it cannot replace real mitigation and rewilding nature," the activist said, before stating that "we don’t need to lower emissions," we need to stop them all together.

This isn't the first time the two public figures have clashed on issues around climate change. Thunberg claimed she wouldn’t waste her time speaking to Trump about climate change at the U.N. climate change summit in December last year. This came after Trump called Time's decision to name Thunberg as their person of the year as "ridiculous" and told the young activist to "chill."

More like this
What To Know About Martin Bashir After Watching 'The Crown'
By Bustle UK
'Waterloo Road' Is Back, With More Than A Few Familiar Faces
By Sam Ramsden and Vivian Iroanya
Mollie King & Stuart Broad Just Shared The First Pic Of Their Baby
By Sophie McEvoy
Joe Lycett Just Took HIs David Beckham Qatar Protest To A Whole New Level
By Sophie McEvoy
Get The Very Best Of Bustle/UK