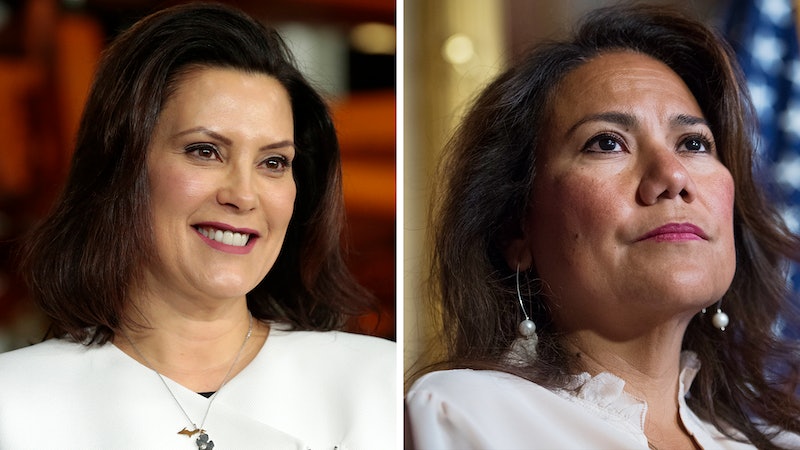 For the first time in history, two women will give the Democratic rebuttal to President Trump's State of the Union address. Michigan Governor Gretchen Whitmer will give the English-language response, and Representative Veronica Escobar (TX-16) will give the Spanish-language rebuttal. Both politicians were elected on the back of 2018's Blue Wave, with Whitmer carrying her state's first all-female statewide ticket into the Lansing capital, and Escobar claiming the El Paso congressional seat previously held by Beto O'Rourke. (In 2014, two Republican women gave the responses, but this is the first Democratic pair.)

Bustle talked with both women about how they're preparing for tonight.

When did you learn you’d be delivering the response?

Speaker Pelosi called me two weeks ago and asked if I’d consider doing it. If Speaker Pelosi asks me to do something, I'm always going to say yes.

What was the first thing you did after you got off the phone?

I called my chief of staff, [JoAnne Huls,] and told her we needed to start thinking through the substance of the speech and where in Michigan I would do it. The Speaker had said I could do it from my desk at the Capitol or from a union hall — wherever I was most comfortable.

How did you land on East Lansing High School?

It's where my kids go to school, and as I was thinking about what I wanted to communicate, the work I do is centered around my kids and the kids of Michigan. I'm thinking about future generations to ensure that everyone has a path to a good life. I am very comfortable in my kids' high school, and I'll be surrounded by friends, teachers, and students. That’s the frame of mind I want to be in.

Will there be any special guests in attendance tonight?

Dr. Rob Davidson, the doctor who challenged the vice president at an event recently, will be there.

Have you received any noteworthy advice?

When the announcement came out, one of the first text messages I got was from Stacey Abrams. There wasn't any surprising advice — be yourself, be comfortable with what you're saying, and speak the truth. A lot of the presidential candidates’ teams have reached out to share encouragement or a thought. And I've heard from a lot of my fellow governors who are doing amazing things in different parts of our country, which I will be highlighting.

How do you prepare mentally before giving speeches?

It sounds silly, but I do a breathing exercise to center myself so I can be relaxed and focused.

Our actions today create our kids' realities tomorrow. Democrats are delivering across the country, and we need leaders who do the right thing, and who have aggressive agendas that will meet our fundamental needs.

How did you find out you were chosen?

It was about 6:00 a.m. My phone rang, and it said Nancy Pelosi. She was on the plane headed for the congressional delegation visit to Auschwitz for International Holocaust Remembrance Day. I jumped out of bed and said, "Good morning, Madam Speaker!” I was doing my best not to scream in her ear. I said, "Absolutely. I'm very honored, and thank you for the incredible privilege." When I got up I told my husband, "Honey, guess what?" And then I texted my kids — I told them, "You guys can't tell anyone." My daughter was like, "Mom, who am I going to tell?"

When I was flying to Washington, D.C. last weekend, I spent my time on the plane laying out my speech. I started with an outline and sent it to my team for feedback. I finished on Friday and sent it over to the speaker's office so they could take a look. And now it's been translated.

I'm bilingual, but my first language is English, so I think in English and I write best in English. Elizabeth [Lopez-Sandoval, Communications and Special Projects Director] in my office did the translation, and we have lots of folks able to proofread, myself included.

What are some challenges of the process?

The challenge is, how do I prioritize the topics that are important to us and distill that into ten minutes?

Tell me about the location choice.

We wanted to do it in El Paso. It has to be from the border. It's a community clinic in the heart of Segundo Barrio — south of downtown, right on the US-Mexico border — that delivers quality health care to people who don't have access to it. Our health care continues to be under attack by the Republicans and the president. It's been Democrats fighting to show up for the Affordable Care Act, fighting to expand health care, and fighting to make it more affordable. But the Republicans are standing in our way. That's going to be what I talk about right out of the gate.

I was reading an interview with Stacey Abrams after she gave the Democratic response last year. She said Representative Joe Kennedy III (MA-4) had recommended not to wear ChapStick.

He told me the same thing! He sent a very sweet text as soon as it was announced. When we were on the House floor, I was returning some e-mails, and he came up and gave me a high-five. I said, "Joe, please give me any pieces of advice." The first thing was, "Don't wear ChapStick."

He said, “Be comfortable with what you want to say.” I'm going to talk about the August 3 massacre. It’s still very difficult for me to talk about without getting emotional. So when he gave me advice, that immediately came to mind. I had to think through how to deliver it in a way that's sensitive to my community while also saying what needs to be said about gun violence and hate.

You don’t know what President Trump will say. How do you prepare for that?

This guy offers no mystery. He's going to be dishonest about health care, about the economy, about impeachment. If we are going to tackle the biggest challenges we face, we have to be honest about them. So that's how I thought about my speech — as being a counter to hyperbole and dishonesty.

How do you make sure everything you’re saying is correct?

I'm my toughest fact-checker. As I was writing my speech, I actually put notes for everything. When I gave it to the Speaker and to my team, they added statistics also.

What’s the ultimate message you’re hoping to convey in your speech?

Fundamentally we have to have hope, and we have to recognize that the power for change is within each of us. I hammer out that idea every time I talk to a group. I hope people come away with a call to action.