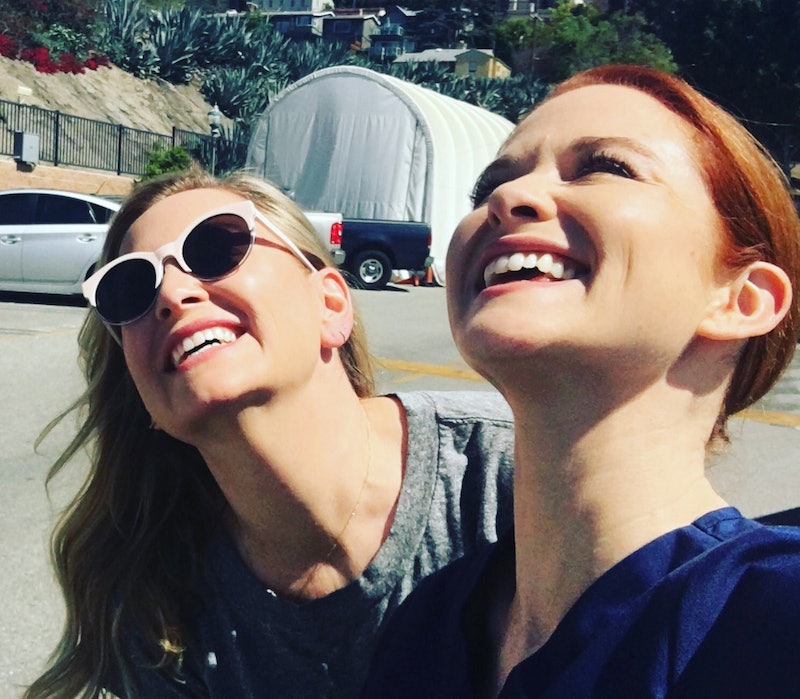 Grey's Anatomy fans have taken their love for Dr. Arizona Robbins and Dr. April Kepner to new heights — literally. On Monday, the actors who play Arizona and April, Jessica Capshaw and Sarah Drew, received a airplane banner that said "We <3 Sarah Drew & Jessica Capshaw." The banner flew a week and a half after the shocking Grey's Anatomy exit announcement, which revealed that the two actors' characters would leave the show at the end of Season 14. Considering that Capshaw has been on the show for 10 seasons, and Drew nine, the two actors had become staples of the beloved show, and fans have been taking the loss hard.

But rather than air their grievances online like disgruntled people usually do, the Grey's fans chose to share their feelings, well, in the air. They didn't have a negative message for the showrunners, though. Instead, fans set up a GoFundMe which raised over $1,000 to fly the banner over Prospect Studios. According to the GoFundMe, the inspiration for the air banner came from fans of Young & the Restless, who protested CBS Studios killing off actor Daniel Goddard in 2011. "If we want to increase our chances of getting Sarah and Jessica back, we really need to step up our game," the GoFundMe page reads.

It truly was an incredible show of support from Grey's fans, and it proves how important Drew and Capshaw are to the series. While the GoFundMe used Goddard's case as inspiration, the chances don't seem good that the overhead banner could have the same effect for Drew and Capshaw.

After the Young & the Restless protested Goddard's exit from the show, the actor's character came back as a ghost who haunted his grieving wife, according to Entertainment Weekly. A lot of unbelievable plot twists have taken place on Grey's Anatomy, but it still remains entrenched in reality. Sadly, once Drew and Capshaw leave the show, they likely won't come back as ghosts. But it's still unclear exactly what will happen to Dr. Kepner and Dr. Robbins.

As of now, fans have taken to Twitter to discuss what could cause Arizona and April's exits, and the prognosis seems quite grim for the latter. The leading theory claims that Arizona will leave to go live in New York to be near Sofia, but that leaves an ominous fate for April.

No matter how the two characters leave Grey's Anatomy, fans of the show will deeply miss them. Both April and Arizona contributed a great deal to the show with their arcs and characters. As Grey's creator Shonda Rhimes wrote on Instagram, "Both Arizona Robbins and April Kepner are not only beloved but iconic — both the LGBTQ and Christian communities are underrepresented on TV."

The whole cast of Grey's Anatomy will feel the loss of Drew and Capshaw's characters, but the show's fans have gone above and beyond, again, literally, in showing their love for the fierce doctors and the actors who play them.

The fact that Grey's fans gathered together to share their love for Jessica Capshaw and Sarah Drew speaks to how important Grey's Anatomy is to its fans. It's always a tragedy when beloved characters leave your shows, but at least these two are going out in style.