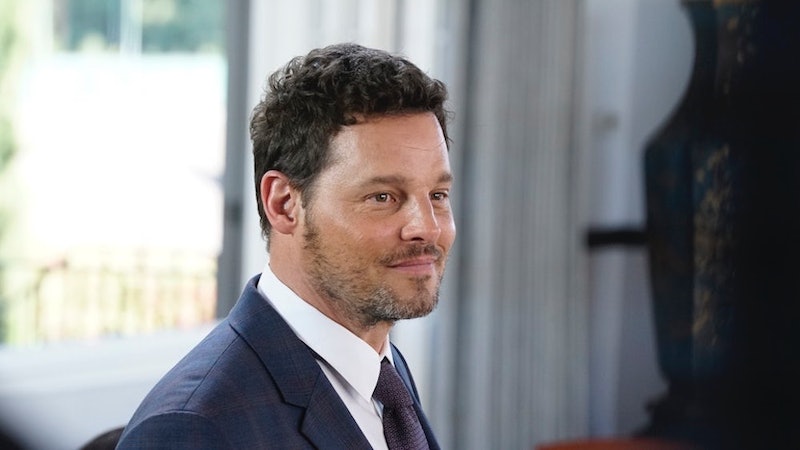 Saying goodbye to Alex Karev was never going to be easy. He's been a part of our lives for over 15 years. But despite how you may feel about his controversial departure — leaving his wife Jo in order to raise his two kids with Izzie Stevens in Kansas — there’s actually a very important reason why Grey’s Anatomy chose to keep Alex alive as opposed to being killed off, which some fans have argued would’ve been the better alternative. It's sort of obvious, actually.

“The reason he wasn’t killed off is because Shonda Rhimes is leaving the door open for a return, in any capacity, if he wants to come back,” an anonymous source reportedly told Us Weekly on March 9. Justin Chambers, who played Alex, announced in January that he was leaving the medical drama and that his final episode of him physically being on-screen had already aired. (He returned for last week’s episode in voiceover form only.) Although he hasn't expressed an interest in wanting to return just yet, he might be into it once we "diversifies" his career choices, as he explained in his own statement for leaving the show.

"There’s no good time to say goodbye to a show and character that’s defined so much of my life for the past 15 years,” Chambers said in a statement to Deadline. “I want to thank the ABC family, Shonda Rimes, original cast members Ellen Pompeo, Chandra Wilson and James Pickens, and the rest of the amazing cast and crew, both past and present, and, of course, the fans for an extraordinary ride.”

Taking all of that into consideration, Chambers appeared to leave the series on positive terms, despite his sudden and abrupt departure. That in itself could suggest a Karev cameo or two could be possible down the line if the opportunity presented itself and if the actor’s schedule allowed for it.

“Justin has struggled for years because of the grueling schedule of filming Grey’s,” the source explained to Us Weekly. “It has taken a toll.” Luckily, a guest appearance now and again wouldn’t require so much of Chambers’ time and attention, which could potentially make him more likely to say yes to a future return. (Fingers crossed!)

He wouldn’t be the first Grey’s actor to pop in for a visit from time to time. The select few characters that haven’t been killed off, such as Addison Montgomery and Preston Burke, have both come back on various occasions. It’s rare, sure, but it definitely keeps the door open to the possibility of Alex once again scrubbing back into Grey Sloan Memorial down the line.