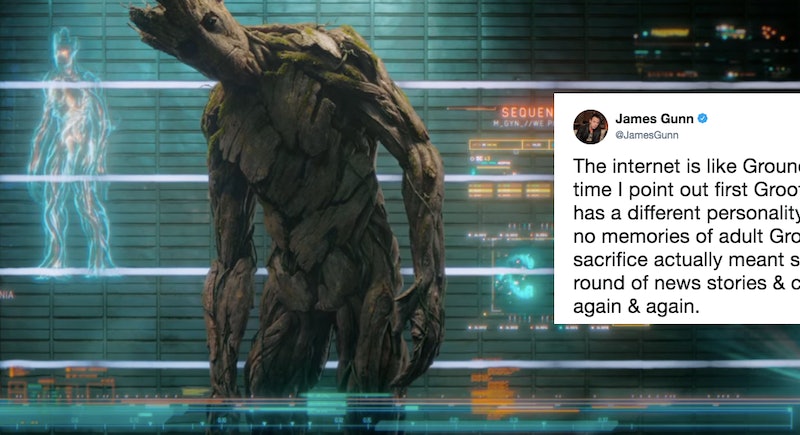 MCU enthusiasts, prepare to have your souls crushed. In a brief Twitter exchange with fans on Feb. 27, Guardians of the Galaxy writer and director James Gunn confirmed that Adult Groot and Baby Groot are not the same. This makes fans' worst fear a reality: Groot really died in Guardians of the Galaxy. And as you may have guessed, the internet isn't handling the news well — at all.

The lovable, wooden alien sacrificed himself to save his team at the end of Guardians of the Galaxy, but to much of the audience's surprised, a sapling from Groot's body was still intact. This made many believe that Groot did, in fact, survive, and the baby branch was a form regeneration, which was made clear to be one of Groot's powers. Though having a different personality and no memory of his previous life, fans still believed that the Jackson 5-obsessed Baby Groot in Guardians of the Galaxy Vol. 2 was just Groot reincarnated — that was until Gunn made the recent, heart-wrenching declaration.

"The internet is like Groundhog Day every time I point out first Groot died. Baby Groot has a different personality, a different body, no memories of adult Groot & adult Groot’s sacrifice actually meant something."

Admittedly, there were a few fans on the same wave length as Gunn, understanding that Baby Groot wasn't just an extension of the adult version, but rather, his son. But, the majority of those online seem to have caught wind of this information only recently. Gunn, however, is adamant that Groot's ultimate sacrifice was not only clear in the film, but that this isn't the first time Gunn, himself, has been vocal about Baby Groot being Adult Groot's son.

Even still, a lot of folks on the internet are taking the news pretty hard, and they didn't hesitate to show their emotions all over Twitter.

If you find yourself in total disbelief too, don't fret. The Marvel Comics, in which Groot's character originated, could be responsible for all of the confusion. Prior to Guardians Vol. 1, fans of the story were aware that each time Groot sacrificed himself for his team (and yes, this has totally happened more than once), he was able to regenerate from a twig back to his old self. And unless this common belief was totally misinterpreted, it looks like the film decided to shake this bit of Marvel information up.

Gunn may be the writer and director of the box-office hit, but that doesn't mean that everyone is going to take his word for it. Finding out that Adult Groot actually dies in Guardians Vol. 1 is such a major blow that a fews are heading toward full-on denial.

As excited as fans are about Guardians Vol. 3, it looks the 2020 big-screen experience will be a bit bittersweet. Sure, watching the team explore new worlds and bonding over new experiences will be awesome. But, fan will be going into the third installment knowing that their beloved Groot won't be back to the Vin Diesel voiced chunk of wood from the beginning. At the end of Guardians Vol. 2, it was clear that Baby Groot was on his way to being a full-fledged adult, and now with this new (or not-so-new) piece of knowledge, they'll be forced to see Baby or Teenaged Groot as a completely separate entity.

All in all, here's to hoping that Baby/Teenaged Groot will be the last Groot fans will ever be introduced to. Because as it stands, hearts all across the internet can't bear to take another heartbreak.