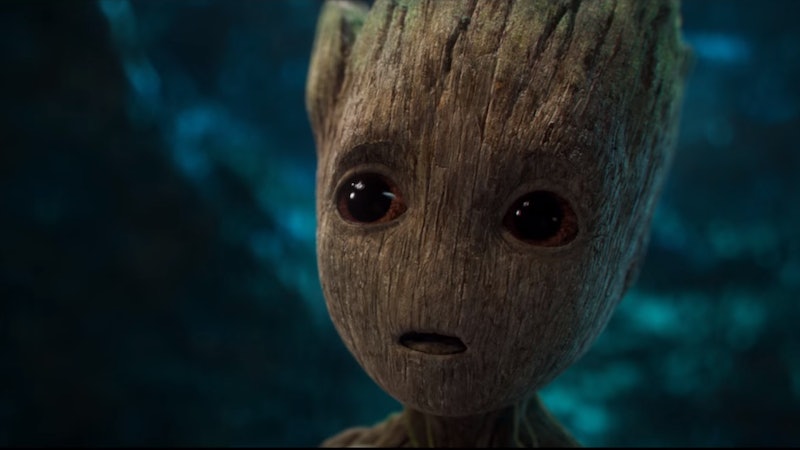 After Groot's heroic sacrifice at the end of Guardians of the Galaxy, the hulking tree creature was reduced to nothing more than a few twigs. As a result, Baby Groot was born, but with a pint-sized version of the character set to be onscreen throughout the second film, fans have to be wondering does Vin Diesel still voice Baby Groot? The answer to that question is a resounding yes, because Guardians of the Galaxy, Vol. 2 needs all of its cast members back.

While director James Gunn probably could have gotten away with using a digitized voice for Baby Groot, the pivotal character would have lost the human inflection and emotion Diesel brings to the role. In an interview with Entertainment Weekly, Gunn revealed that very little audio processing was needed to give Baby Groot his unique childlike sound. Gunn explained,

"I mean, there's a tiny amount of processing that we do on a few of our characters, but it's very little. It's mostly just Vin's voice. He's able to, you know, speak in a much higher register than he normally does."

In other words, Diesel is not only still an essential part of the cast, Baby Groot's voice is almost 100 percent his, with very little computer tinkering needed. In fact, Gunn revealed on Facebook he and Diesel have a special version of the Vol. 2 script with Baby Groot's "I am Groots" translated to English.

Even though he only speaks three words, Groot is a complex character and the new movie is presenting an innocent, childish version of the adult Groot who heroically saved his friends in the first film. The movie needs an actor to truly convey the full meaning behind Groot's repeated words — because there is always a larger meaning.

It's clear Gunn believes Diesel is the only person who can give Groot's character the depth he deserves, and Diesel is happy to bring him to life. While discussing the challenges of playing Baby Groot, Diesel told EW,

"Groot is such a fascinating character on so many levels. For this installment I needed to not only pitch up the performance, I needed to embed even more wonder than he usually possesses… and he always has a wonder about him already. So proud of the character and what James Gunn has done with him."

When you head to theater on May 5 to see the Guardians' next adventure, you can rest assured that Diesel is still the man behind Groot, baby or not.