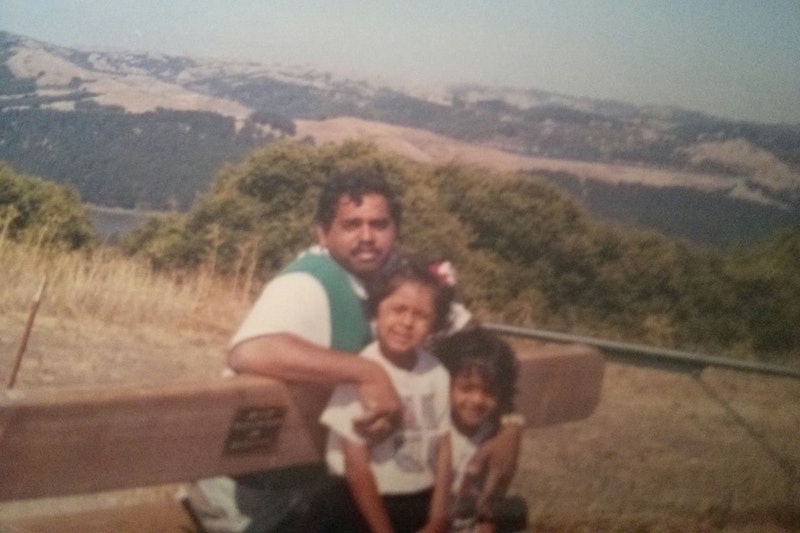 "Tomorrow, we will hear Krishna explain why going to war, even if it meant killing cousins and relatives, was the right thing," my father said as he closed the Mahabharata, one of the two great Sanskrit epics of India. One of my most cherished memories from childhood is my father reading to my sister and me, as we huddled under the blankets of our twin beds. Though Cupertino, California, was home, bedtime tales were usually from my father’s native India. My 6-year-old younger sister and I, the older one at 9 years old, pleaded with him to continue. “What happens, isn’t killing bad? Isn’t nonviolence what Gandhi preaches?”

That night was the first time I heard my father say, "Things aren’t black or white. Life is filled with shades of gray — there is and can be a lot of fluidity.”

Over the years I was to hear him use this to explain a wide variety of things. My dad not only introduced me to Hindu mythology but stoked a great desire within me to seek answers and not to judge things in simple black or white. This lesson is reinforced by the Mahabharata, literally in some instances — as in the case of Shikandi, a woman reborn as a warrior and sworn to wreak vengeance on the Bhishma, the patriarch of the ruling clan. Bhishma refuses to fight as he doesn’t consider Shikandi a man.

Of course, my father's lessons weren't all philosophical. From my first soccer game, when I was barely 6, he played the role of cheerleader and occasional referee comfortable among a group of dominant white soccer moms. My dad taught me how to change a tire when I was 10. When I got my period for the first time, he gave me a book, asked me if I had any questions and explained to me what was going on. At that age, it was awkward enough to be worried about my weight and being accepted by my peers without having to learn that my body would go through even more change, with little or no control on my part. My father spoke of accepting ourselves and not paying too much attention to what other kids said, which often was mean. I recall him repeatedly telling me that bodies came in all shapes. His words gave me some comfort, though it didn’t always last. Looking back, I realize he was body positive and a feminist, even if he wouldn’t have described it in those terms.

Pictures from my soccer days show me as a young 9-year-old in shorts and a baggy shirt. There was never a time in my childhood I liked wearing a dress or a skirt — much to my mother’s dismay. Despite her attempts to persuade me that, “You could rock this color,” I was adamant that I did not feel comfortable in something “feminine” or “girly.” As I entered my teens, the pressure to behave appropriately as befits a nalla Tamil ponnu — a good Tamil girl — mounted. A nalla Tamil ponnu is demure, graceful, accommodating, and well-put-together. Not one that was edgy or sporty, and played as though she was one of the boys, but one that learned classical music, got straight As on her report cards and was well rounded. So I begrudgingly wore half-sarees, attended Bharatanatyam, classical dance of south India, and participated in religious festivals. All this while, I yearned to be free of the shackles placed by cultural expectations of Indian women.

My dad who loved poetry and literature encouraged this pursuit of traditional culture but just as often told stories of heroic women, who refused to be restricted. I was spellbound by the story of Kannagi who lit a city on fire, unable to tolerate the injustice of her husband being put to death for a crime he did not commit. Manimekalai, who rejected a princely suitor and chose to become a Buddhist nun taught me that female spiritual empowerment was possible even in a hegemonic culture.

Despite all this, my teen years were not easy. Through college and early adulthood, like many others I faced the immigrant’s identity quandary—Who am I? What do I stand for? What are my passions? Going to college in the midwest was what really brought to fore my father’s belief and conviction to raise me to have unabashed opinions and question everything. So whether disagreeing with my history professor, who was arguing that colonialism might have been a good thing, or jockeying for air time with guys in group projects or class discussions, I felt that my father had prepared me to take on the world. He’d done this by helping me understand that life is context-laden and we must strive to be our best no matter what the world around us puts us through. And most importantly, that I wouldn't have to do it alone either.

My culture dictates a lot of who I am today. From my childhood, I’ve complained about how being a girl or a brown person was difficult. Because of my dad, I now recognize how the fluidity of each of these roles has made me into the fiercely strong-willed person who values community-building.

After two years of being an activist documenting abolition rallies and Pride parades in New York, I was curious to understand how my father viewed fluidity. When I did ask my dad he replied, “We’ve always known gender is a construct.” As he put it, “The Gita [part of the Mahabharata] teaches us that all boundaries — real or perceived — are an illusion.”

More like this
Why You're Seeing Green Bandanas At Abortion Rights Protests
By Lexi Inks
How To Come Out Online, According To Trevi Moran
By Melanie Mignucci
Windrush Victims Are Still Waiting For Compensation
By Sam Ramsden
Bustle Newsletter: June 27, 2022
By Hayley Schueneman
Get Even More From Bustle — Sign Up For The Newsletter