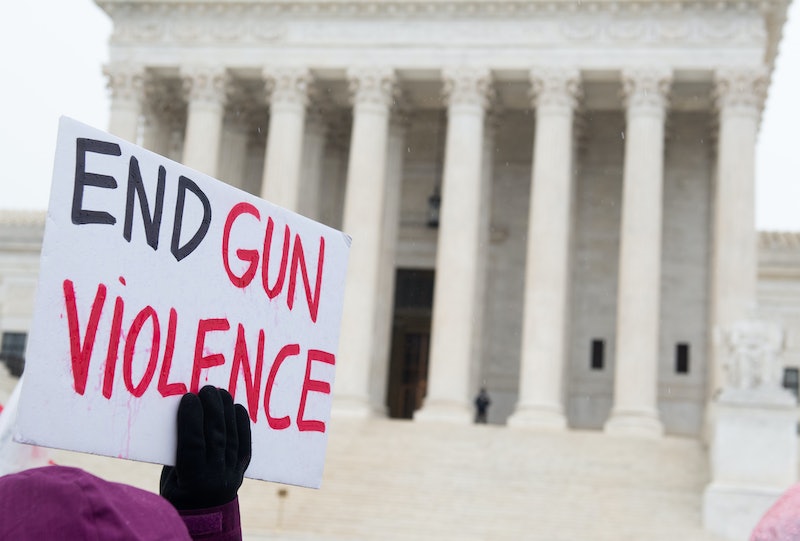 When each of Hilary Uhlig’s children were in high school, their schools went into active shooter lockdowns. Though both cases were false alarms, receiving a chilling “I love you” text from her daughter in the middle of the school day was enough to push Uhlig towards working to change U.S. gun policies, starting in her home state of 22 years. Now the Oregon chapter leader for non-partisan gun-safety organization Moms Demand Action, Uhlig is one of close to 6 million members whose work in all 50 states has led to major gun law reform.

In 2019 alone, the organization has been able to effect enormous change on the state level. On Dec. 13, Moms Demand Action and their parent organization, Everytown for Gun Safety, released their end-of-year 2019 report, highlighting the local gun-safety victories that took place around the country, and how gun issues are becoming more important to voters in the lead-up to the 2020 election.

“We are seeing a shift and a change in what people believe and prioritize around the issue of gun violence,” Moms Demand Action founder Shannon Watts tells Bustle.

A Harvard survey published in September found that gun violence was the top issue for 27% of voters. So far in 2019, there have been 394 mass shootings nationwide — an average of more than one every day. The Democratic presidential candidates even held a six-hour forum on gun violence, where their ideas for gun reform were put in the spotlight.

Still, The Washington Post reported in November that the White House has “abandoned” its search for solutions to address gun violence. Their reporting found that President Trump doesn’t even ask about the issue anymore. And while Moms Demand Action and Everytown’s report highlights progress that bipartisan gun safety bills have made in the House of Representatives, they also stress how the Senate has not yet voted on any of those bills.

Watts tells Bustle that despite slow federal reform, states have been taking gun safety into their own hands across the country. In Virginia, after a mass shooter killed 12 in a Virginia Beach office, 16 candidates that Everytown had endorsed won; a post-election poll conducted by the Everytown found that gun safety was Virginia voters’ number one issue. According to the organization’s end of year report, 17 states rejected bills that would have allowed guns in schools. Four new states enacted “red-flag” laws, or laws that allow guns to be confiscated by court order if the owner appears to pose a danger to themselves or others.

In Oregon in particular, activists like Uhlig have helped push for legislation to keep guns out of the hands of known domestic abusers. In June, Oregon governor Kate Brown signed a bill that would require convicted domestic abusers to give up their firearms. This strengthened the 2018 closure of the so-called "boyfriend loophole," whichallowed domestic abusers to purchase firearms as long as they weren’t living with or married to their victim and didn’t have children at home.

Uhlig tells Bustle that the change in policy for domestic abusers was a huge victory. “Firearms and domestic violence unfortunately often coincide,” Uhlig says. “American women are 21 times more likely to die by firearm homicides than women in other high-income countries.”

The organization’s report says that 2020 will be the “most pivotal year” for the gun safety movement.

According to research by Everytown, women face elevated risk of being shot by a domestic partner. Everytown found that on average, over 50 women each month are killed by an intimate partner. Those statistics, Uhlig says, are in part why progress in Oregon has felt like such an important victory.

“Simply having access to a gun during a domestic violence incident makes it five times more likely that an abusive partner will kill his female victim,” Uhlig says. “I think everybody can recognize that women who are victims of domestic violence need help and support and protection.”

In the wake of these state-level victories, a focal point of the the 2019 report is the 2020 presidential election. Moms Demand Action created a Gun Sense Candidate program that catalogs presidential candidates based on their commitments to gun reform. According to the website, the goal of the program is to help voters discern how dedicated candidates are to addressing gun violence if elected. “We have our eye on election season and we know that getting gun-sense champions elected to state houses and to the federal government is crucial,” Uhlig says.

In addition to policy change that took place, Everytown and Moms Demand Action emphasized in their year-end report that growing activism on the ground has been essential to their combined success. In addition to growing networks and chapters in all 50 states, this year 12 volunteers from Moms Demand action actually ran for office — and won. Laura Jane Cohen, who won a Springfield, Virginia, school board seat, ran on a platform of school safety that emphasized keeping guns out of schools.

Uhlig and Watts tell Bustle that while Moms Demand Action has made major progress in 2019, they’re gearing up for the upcoming election year in hopes of pushing for more federal policy change. The organization’s report says that 2020 will be the “most pivotal year” for the gun safety movement.

Correction: An earlier version of this article misstated the year in which Oregon closed its "boyfriend loophole." It has been updated with the correct year.

More like this
25 Inspiring Quotes From Black Women To Celebrate Black History Month
By Kyli Rodriguez-Cayro and JR Thorpe
24 History-Making Black Women You Probably Didn't Learn About In School
By Ayana Lage and JR Thorpe
Watch Jacinda Arden’s Devastatingly Honest Resignation Speech
By Sam Ramsden
What The UK Blocking Scotland’s Gender Recognition Bill Means
By Sam Ramsden
Get Even More From Bustle — Sign Up For The Newsletter
From hair trends to relationship advice, our daily newsletter has everything you need to sound like a person who’s on TikTok, even if you aren’t.