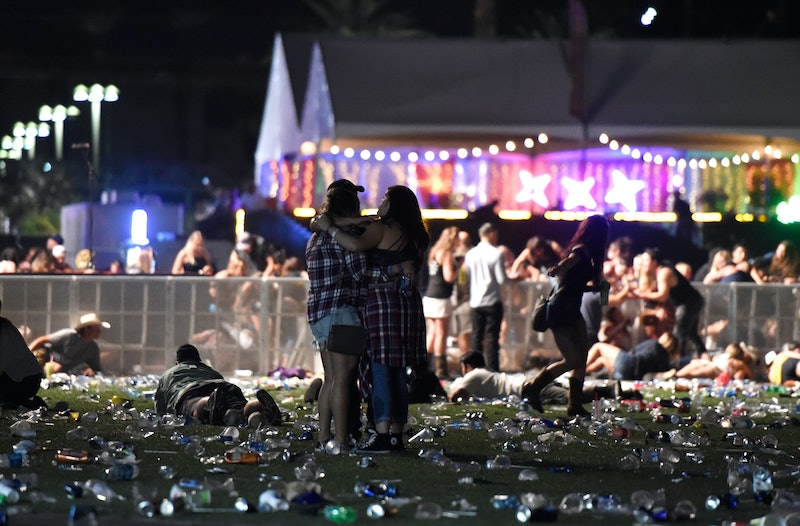 An interesting thing happens when firearm supporters fear their guns will be taken away from them — they buy more. Case in point, CNN Money reported that gun stocks rose after the Oct. 1 Las Vegas mass shooting that killed more than 50 people and injured over 400. Shares of Sturm Ruger were up six percent Oct. 2, while American Outdoor Brands, the company formerly known as Smith & Wesson, gained nearly seven percent. The increase is the first since Trump took office in January. Until now, gun sales had been declining as gun owners were apparently less worried about losing their Second Amendment rights under Trump's presidency.

"Both stocks have tended to rally in the immediate aftermath of mass killings, which sadly have become more routine," Paul R. La Monica reported for CNN Money. He cited the mass shootings at the Pulse nightclub in Orlando, Fla. in June 2016, the San Bernardino mass shooting in December 2015, the Aurora, Colorado, movie theater, and Sandy Hook Elementary School in Newtown, Conn. in 2012 as instances that also resulted in the same stocks trending upward.

"The move higher in gun stocks is due to the perception that there is bigger potential for tighter gun controls, as well as a belief that gun buying will pick up as Americans look to better protect themselves" Gary Kaltbaum, president of investment firm Kaltbaum Capital Management, told USA TODAY.

When those who oppose gun control feel protected, gun sales actually decline. USA TODAY reported that Storm Ruger's stock fell 14 percent the day after Trump was elected, most likely because Trump's threat to the Second Amendment was perceived to be much less than if former Secretary of State Hillary Clinton — whom The Nation called the most pro-gun-control presidential candidate in history — were elected.

The Nation also reported that the NRA donated $30 million to Trump's campaign, and Trump thanked them in a speech in April by declaring, "The eight-year assault on your Second Amendment freedoms has come to a crashing end."

Because sales have declined so sharply since the election, two ways to increase gun sales is to instill fear of "the other" in people, and to create a new generation of gun buyers. "This culture of fear is vital to gin up demand for guns as necessary self-defense accessories, thereby creating a new generation of buyers, and to garner support for radical new legislation that will put 'good guys with guns' virtually everywhere," George Zornick wrote for The Nation. "And President Trump is a vital ally in this effort, because he traffics in the same anxieties."

The biggest threat to gun control supporters is the Constitutional Concealed Carry Reciprocity Act of 2017, a bill that would allow virtually anyone to carry a loaded, concealed weapon in public, in any state without a background check or any safety training, according to Everytown Gun Safety.

Zornick reported that the NRA convention in April — where the slogan “God, Guns, and Trump” was visible everywhere — trafficked in fear to encourage people to arm themselves. "All of this paranoia is focused on a particular set of bad actors. The vast majority of the NRA attendees are white, and the imagined threats at all of the panels — Mexicans, Islamic terrorists from the Middle East and Africa — are not," Zornick wrote.

"Studies clearly link gun ownership and opposition to certain gun-control laws with expressions of racism," he continues. "This is not to say that every gun owner is racist, of course, or that all racists are armed. But using interviews from voters in a 2008–9 panel study, a group of four researchers found that for every one-point increase in symbolic racism — as measured by questions like 'How well does the word ‘violent’ describe most blacks?'— there was a 50 percent increase in the chance of that person having a gun in their home, and a 28 percent increase in the odds that they support concealed-carry legislation."

Convincing people they are in mortal danger, and should therefore arm themselves, is a dangerous and reckless backhanded way to boost gun sales and reward the NRA for helping Trump get elected. However there is no data to back up this perceived threat, which makes the alleged campaign of fear extremely troubling.

Everytown for Gun Safety reported that those killed by guns are overwhelmingly women and minorities, not the other way around. An average of 50 women are killed by gun violence at the hands of an intimate partner every month. Black men are 14 times more likely than non-Hispanic white men to be shot and killed with guns despite only making up 14 percent of the U.S. population. An overwhelming number of those who commit mass shootings are white males, according to Statista.

An effort to boost gun sales through a campaign of fear is beyond the pale. If you want to do something about it, call your congressperson and ask them to support gun control reform and to oppose the Constitutional Concealed Carry Reciprocity Act of 2017.