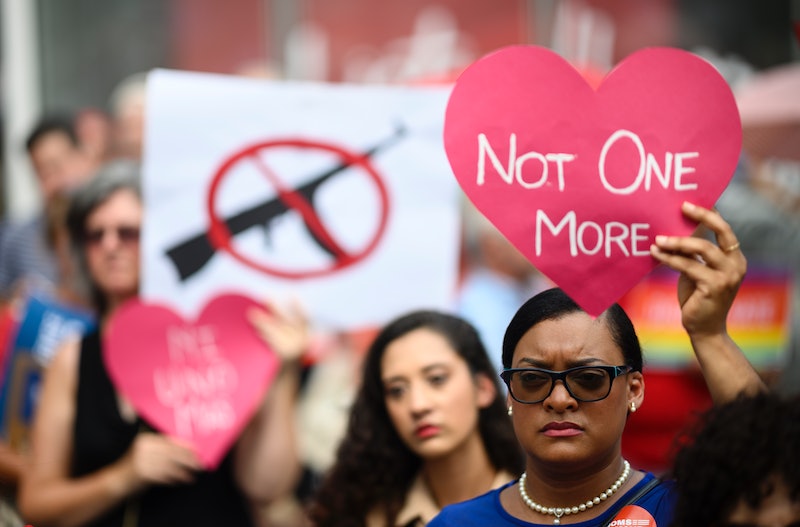 La'Shea Cretain is one of the nearly 1 million women alive today who have been shot or shot at by intimate partners. She was just 18 when her ex-boyfriend shot her five times in the head and torso, right in front of their then-4-month-old daughter. According to a new Everytown for Gun Safety report about intimate partner violence, guns, and women that was released Thursday, while gun violence poses a unique threat to women in abusive relationships, women of color face a disproportionate impact.

Everytown's report, Guns and Intimate Partner Violence: America's Uniquely Lethal Intimate Partner Violence Problem, analyzes intimate partner violence in the United States, with a focus on the disproportionate impact it has on black, American Indian/Alaska Native, and Hispanic women. Nearly 4.5 million women have reported being threatened with a gun, the report states, and more than half of female victims of intimate partner homicides in the United States are killed with a gun, according to the FBI's Supplementary Homicide Reports from 2013 to 2017.

Women of color, specifically, are more likely to face domestic or intimate partner violence because they "have less access to protective services that reduce the risk of lethal violence," like law enforcement they can trust, safe schools and housing, and comprehensive health care, according to the report.

Black women ages 18-34 are nearly three times as likely to be shot and killed by an intimate partner than white women in the same age group, according to the FBI's homicide statistics.

Cretain had previously reported her ex to the police when he showed up at her job and threatened her, but she says it only kept him away for a short time, and the police didn't take the gun she'd seen him threaten someone with before.

After they broke up, Cretain was at her aunt's house on Oct. 3, 1996, when her ex showed up at the doorstep. Her aunt let him in because she didn't know about the past abuse, and then she left the room. "Then at that moment, he just started talking to me, then he slapped me in front of our daughter." When Cretain screamed, her aunt ran into the room and her ex left. But his mom called a few minutes later, saying he had a gun to his head.

Then her ex and his mom showed up at her aunt's house. She was in the middle of feeding their infant daughter, but she went to the door and asked him to leave. "And then that's when I turned my head and he shot me from behind through the glass door, in front of my daughter. I fell in front of her." Her ex then died by suicide.

Cretain's aunt called 911, and after surgery to stop her internal bleeding, she was hospitalized for three weeks. Her doctor told her she may have to use a colostomy bag for the rest of her life because of how the bullets damaged her colon. "I had to learn how to walk and talk again, because I was on a breathing tube, and I couldn't even comb my hair," she says. Now, 23 years later, she does not have to use a colostomy bag, but five of the bullets still remain in her head and hip, leaving her with back problems and pain.

Everytown's report contains five policy proposals, some of which have already been enacted in some states, that would help protect domestic violence survivors from gun violence. The proposals would:

Cretain says the law she thinks would've been helpful to her is an extreme risk law, also known as a "red flag" law. Red flag laws allow immediate family members and law enforcement to petition a court for an order to temporarily remove someone's guns if they think the person poses a serious risk to themselves or others, according to Everytown. Cretain believes a red flag law may have allowed her ex's mother to call the police and get help for him.

Caitlin Lowry, the public policy and advocacy manager for YWCA, an organization dedicated to eliminating racism and empowering women, says that, in addition to the gun safety proposals in the Everytown report, the Violence Against Women Act is another piece of legislation that attempts to address the intersection of domestic violence and gun violence. VAWA was first passed in 1994 and has been updated and reauthorized since, but the most recent version of VAWA, HR 1585, was passed by the house in April 2019 and still hasn't been taken up by the Senate.

The new version includes provisions that promote trauma-informed training for law enforcement so that they don't re-traumatize crime victims, bars current and former dating partners convicted of stalking and domestic abuse from purchasing firearms, and authorizes programs that will improve data collection on domestic violence and stalking, among other updates, according to the American Bar Association.

Elizabeth Carr, the senior Native affairs adviser for StrongHearts, a domestic violence helpline for Native women, tells Bustle some updates to VAWA would help Native women specifically, who often don't report their abuse for a number of reasons.

"One of the biggest barriers is probably the geographical isolation, lack of law enforcement or services to report to is probably the primary reason" that Native women don't report their abuse, Carr says. Native people also have a historical distrust of government agencies because of the ways they've been treated, she says, and Native women often don't feel like there's anyone at local law enforcement agencies who will understand their culture and the circumstances of their abuse.

"If they don't have somebody who they can reach out to who's going to understand their issue, like a culturally appropriate resource, it's likely that they're not going to reach out to a mainstream organization," Carr says.

Carr says the new version of VAWA would also allocate more government funding to tribes to help them better address and prosecute domestic violence. Currently, Native women have to navigate a "jurisdictional maze" when it comes to whether a tribal or local law enforcement agency is going to respond to or prosecute a domestic violence crime.

Everytown notes that gun violence and intimate partner violence doesn't just have devastating effects on victims; it impacts their families, too. Cretain didn't discuss the shooting with her daughter, who was a baby at the time, until a few years ago. During her senior year, she did a project on domestic violence and wanted to use her mom's story. In May, she graduated from college with a degree in criminal justice and sociology.

She says her daughter is one of her biggest supporters and encourages her to speak out, so she does. "I want to save another life," she says. "To urge others to never give up on themselves."

Editor's Note: This story was updated on Nov. 26 to clarify that La'Shea Cretain does not use a colostomy bag.