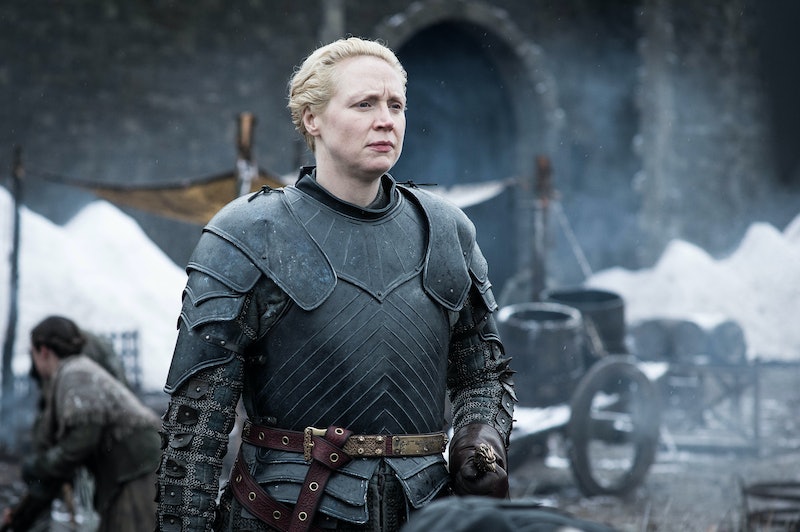 When you star on a widely popular show like Game of Thrones, odds are that will be the role you get recognized for the most throughout the rest of your life. And while some actors may wish they could distance themselves from their onscreen counterparts, Gwendoline Christie's latest comments about her Game of Thrones character, Brienne of Tarth, prove that she has absolutely no qualms with being forever tied to this fierce Westeros warrior. In fact, she's honestly thrilled about it.

While attending the Game of Thrones final season premiere, Christie spoke to E! News on the subject and explained why she won't mind being connected to her character for many years to come, long after the show is over. "I think that's a great privilege… We don't see — we haven't seen women like that in mainstream television," Christie stated about playing Brienne, who has proven herself to be just as good with a sword (if not better) than any man on the series. And it's one of the things Christie loves most about her.

"What we've seen is a patriarchal viewpoint of how men believe women should be and we haven't been allowed an awful lot of variation with regards to women or men, or all sorts of people," Christie told the outlet. "I feel like Brienne of Tarth inhabits the role of the classic outsider and why we love her is through her deeds and actions." And if that love from fans means that they'll forever associate her with Brienne, then so be it. Christie added, "I am delighted to carry that forward for the rest of my life. It's been a huge privilege to play this role."

Ever since she was first introduced, Brienne was mocked by many (most men) who thought the idea of a female knight was ridiculous, but never once did she let their comments and snide remarks get the best of her. Instead, she's gone on to battle some of the greatest fighters in Westeros, including The Hound, while also capturing the heart of Free Folk leader Tormund Giantsbane (though she doesn't seem all that interested in his affections — at least not right now while there's a war to be won).

The point is that she doesn't need saving and she doesn't need a man in order to have a sense of purpose in the world. It's such an empowering message to send to young girls and women and the fact that Christie recognizes that proves she's just as admirable as Brienne in real life.

She isn't the only one, though, who appreciates everything this show has done for her. Nikolaj Coster-Waldau, best known for his role as Jaime Lannister on the series, admitted there are a lot worse things in this world than being associated with his character. "It's not a bad show to be associated with," he told E! News at the same event during a separate interview. "It could be a lot worse. No, I'm thrilled."

Hopefully we're in for one more Brienne and Jaime reunion before this epic saga comes to a close. Either way, characters like this have made it well worth the journey.