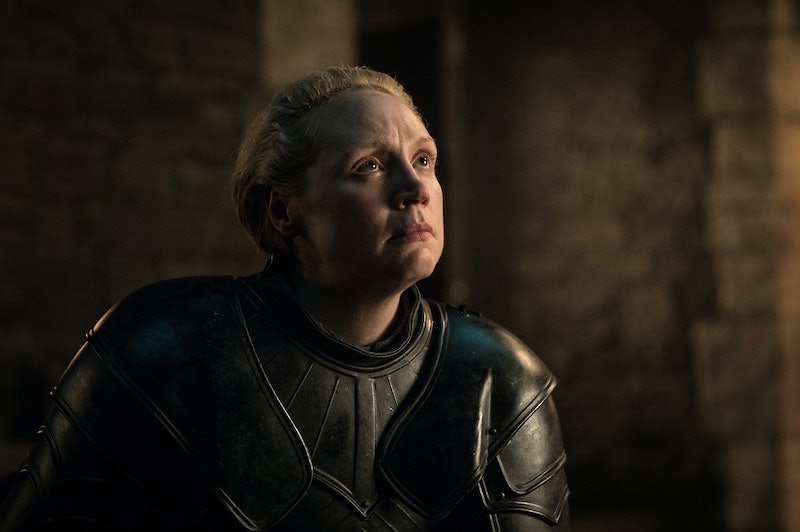 Ser Brienne of Tarth has always been an embodiment of female empowerment, but it turns out that her real-life counterpart possesses just as many admirable qualities. Nominations for the 71st Primetime Emmy Awards were announced on Tuesday, July 16, and while Game of Thrones received record-breaking nods in various categories, Gwendoline Christie's Emmy nomination only happened because the GoT star submitted herself. That's right, while many potential nominees are placed in contention by the studios supporting their projects, according to Entertainment Weekly, HBO did not submit Christie for contention, so, in true Brienne fashion, she took matters into her own hands.

Like the true warrior that she is, Christie reportedly self-submitted to the Television Academy for Emmy consideration. (And she wasn't alone either: Alfie Allen, who played Theon Greyjoy, did the same thing.) Bustle reached out Christie's rep to confirm her self-submission, but had yet to hear back at the time of publication.

Self-submitting is absolutely an option when it comes to getting on an award show's radar. EW did a breakdown of the Emmys process in 2018, stating that anyone can submit themselves for Emmy consideration so long as they have "who achieved something on TV" during the window of eligibility. In that regard, Christie absolutely fits the bill. Her portrayal of Brienne has never failed to captivate fans and show that female characters can be anything they want to be — including fierce, badass warriors who know how to swing a sword better than most men. And Season 8 of Game of Thrones saw Brienne's arc come full circle when she was officially knighted in Episode 2, which has always been a dream of hers from the very beginning.

Naturally, fans were instantly thrilled to see that Christie had been nominated for Outstanding Supporting Actress in a Drama Series for the 2019 Emmys. But now, knowing that she herself went the extra mile to help make it happen and advocate for what she (and the Television Academy) felt she deserved makes her Emmys nod all the more exciting.

It just goes to further demonstrate how believing in yourself and your abilities (and pointing them out to others) can definitely pay off. Never let the fear of failure hold you back from achieving your dreams. It's certainly working out in Christie's favor — as it should be.

However, Christie's submission did come at a price, quite literally. In the same Entertainment Weekly article breaking down of the Emmy nomination process, the outlet revealed that it costs a program $425 to enter a category, while an individual submission totals up to $225, though, fees are waived for the first entries. From there, 29 peer groups, made up of over 22,000 members of the TV Academy decide who gets the nominations. Thankfully, Christie was among them, which marks her first ever Emmys nod for the show.

This moment has been a long time coming for the actor. And while it doesn't take away the heartache of having to say goodbye to such an epic series, there is a certain comfort in knowing that longtime talents like Christie are finally getting the recognition for their work that they deserve.

More like this
Netflix Shut Down 'Bridgerton' S3 Rumours About A “Very Dark” Storyline
By Bustle
'The Queen’s Gambit' Season 2 Tweet Wasn’t From Anya Taylor-Joy
By Mary Kate McGrath, Jack Irvin and Grace Wehniainen
'GoT' Star Emilia Clarke Says She "Just Can't" Watch 'House Of The Dragon'
By Brad Witter
The Full EGOT Winners List: Only Viola Davis & These 17 People Are EGOTs
By Radhika Menon, Marina Watts and Grace Wehniainen
Get Even More From Bustle — Sign Up For The Newsletter
From hair trends to relationship advice, our daily newsletter has everything you need to sound like a person who’s on TikTok, even if you aren’t.